Man killed for objecting to public urination: Questions for us

Our youths have stopped fearing the law.

Unbelievable, barbaric displays of lynch mob mentality are becoming routine sights across the country. If rogue criminality of cow terrorism made us gasp in horror, what happened in Delhi on Saturday, May 27, should make us squirm in disbelief.

The brutal murder of an e-rickshaw driver in northwest Delhi's Mukherjee Nagar area, because he objected to two youth urinating in public even though the Sulabh Shauchalaya (public toilet) was barely metres away, is one more episode which confirms how violent lumpenism is becoming the order of the day.

The 31-year-old e-rickshaw driver, Ravindra Kumar, seemed to have signed his death warrant when he merely pointed out that public facilities were available and urinating in the open, at Gate 4 of the GTB Nagar Metro station to be precise, wasn't very civilised behaviour. Ravindra Kumar had the temerity to laugh at a couple of youths who were clearly in breach of law, civic sense and basic cleanliness.

Yet, the price that Kumar paid for saying the obvious was his very life. The lunch he had yesterday was his last, as the two youths, who had warned vendetta, returned with a mob of 20, armed with bricks wrapped in towels and iron knuckles.

They thrashed and beat Ravindra Kumar until he was soaked in blood, and then disappeared when fellow e-rickshaw drivers informed Kumar's brother and called the cops. Kumar collapsed in his mother's arms, and was declared brought dead at a nearby hospital.

The biggest ordeal facing a good citizen in present-day India is simply abiding by the law. It seems living by the law and telling others to do the same is currently the gravest and most fatal mistake anyone can commit in the country. 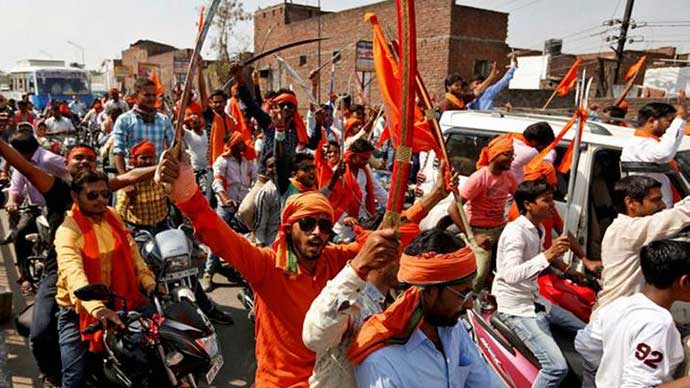 Mob violence is something that cannot be kept in a controlled environment.

While WhatsApp and Twitter rumours can help congregate an army of cattle vigilantes (let's admit it: they are terrorists and nothing less), who would in no time beat perfectly law-abiding, document-bearing citizens to pulp and add to the murder register, the latest instance shows a virulent sickness spreading through the body of the nation in which any criticism is attacked with a crazed, bloodied, murderous mob fury.

That Union minister of urban development, M Venkaiah Naidu, has condemned the murder of Ravindra Kumar because he was "promoting Swachh Bharat" is both ironic and terribly insensitive. Ironic because in the present-day India, Swachh Bharat has become an empty signifier - a "jumla" of sort - in which money has been poured in, cess imposed to tax the ordinary Indian, but very little has shown up in the report card.

Sad that an e rickshaw driver was beaten to death for stopping 2 people from urinating in public in Delhi. He was promoting #SwachhBharat /1

Whether it's manual scavenging, toxic foams coming out of Bangalore lakes, dirty, littered streets of the Indian towns and cities, or the rigidity of the Indian male preventing him from using public lavatories even when they are available, Swachh Bharat Abhiyan has largely ended up as massive billboards, newspaper and TV advertisements, and engineered social media trends to frontline the face of Prime Minister Narendra Modi.

It has failed to become a revolution on the ground, and has only served as one more electioneering tool in the hands of the ruling regime.

That Venkaiah Naidu condemned the murder of Ravindra Kumar because the e-rickshaw driver was "promoting Swachh Bharat" by asking the youths to not publicly urinate, is seriously insensitive. Does this mean that ministers in PM Modi's Union cabinet would condemn daylight murders only when it helps further a government agenda?

Did Naidu condemn the fatal lynchings in Jharkhand, Uttar Pradesh, Rajasthan, Madhya Pradesh, Assam, Haryana? In fact, in most of the cases, FIRs have been lodged against the victims themselves, over dubious cow protection issues even as the victims were perfectly on the side of law, having the necessary documents that would prove they were doing nothing wrong.

Another significant question we need to ask is this: why are Indian youths turning to extreme lynch mob violence en masse? Whether during electioneering and indulging in riot games in the states the BJP is eyeing for political capture, or instilling the fear of the cattle zeitgeist in various BJP-ruled states, why is the youth rejecting a culture of civilsed conversation and dialogue and opting for orgiastic violence as solutions to their collective frustrations?

It is true that the youths today have it really bad. Report after report has shown that while Modi government's big claims about job creation are a chimera, the alarming rate at which existing jobs are vanishing means we are staring at the very vortex of a staggering population of unemployed and very angry youths.

Whether it's job cuts in the organised IT sector, or the shock attrition in manufacturing and affiliated sections comprising chunk of the informal economy, a significant section of the youth today are left without a steady source of income. What do they take to in order to compensate for the loss of vocation and the Himalayan anxiety? Street violence of the basest kind.

BJP national president Amit Shah is on record saying that it's not possible for the government to provide jobs for everyone, so it promotes entrepreneurship and self-employment. The statement in the light of demonetisation seems to be a cruel exercise in irony because it was precisely the small-scale entrepreneurs who were hit the hardest by notebandi, along with the daily wage workers, lower middle class salaried sections, the poor farmer, and others.

You can't control the mob

What began as cow lynchings with the murder of Mohammad Akhlaq in Dadri in 2015, has now transmogrified into random, omnipresent mob violence as an answer to any critical intervention. Cattle terrorism in India has reached epidemic proportions, but the condemnations are hard to come by from the BJP top brass.

If anything, they are brushed off a "fringe elements". It's entirely another thing that such fringe articulation of a highly mainstreamed violence gets rewarded for its contribution to the martial Hindutva agenda.

But then mob violence is something that cannot be kept in a controlled environment, of targeting only the minorities, or those challenging the majoritarian narrative. Soon, the victim of mob rage becomes someone who is the ideal citizen, perfectly in line with the regime's vision of Swachh, Hindu, martial India.

Ravindra Kumar, the slain Delhi driver and the emissary of Swachh Bharat, was precisely that - the victim of the lynch mob turning on the Adarsh Bharatiya.

#Mob violence, #Cow Vigilantism, #Lynchings
The views and opinions expressed in this article are those of the authors and do not necessarily reflect the official policy or position of DailyO.in or the India Today Group. The writers are solely responsible for any claims arising out of the contents of this article.