The BJP will come to the Delhi civic polls with greater confidence.

After failing to make a formidable mark in the Assembly elections in Punjab and Goa, the AAP camp is grappling with many questions. But before the analysis for why and how it happened, outlined below are three immediate challenges for the party and may be a few suggestions (unsolicited advice) on how to overcome them:

The big immediate challenge for the AAP will be the civic body elections in Delhi. The Delhi government led by AAP has been at loggerheads with the BJP-led three MCDs in the city-state. This confrontation has seen strikes, resulting in the national capital stinking with garbage spills on many occasions.

Who and how much do the people of Delhi blame for the muck mess, will decide the fortunes in the crucial civic body elections.

The disappointing Assembly election results have also disheartened party supporters and volunteers who will now have to take on an energised BJP cadre. The BJP will also come to the civic polls having already seen a surge in local body elections in the states of Maharashtra and Odisha.

AAP's performance in Punjab and Goa has given a big boost to the Congress, which is now looking at revival in Delhi. The Congress city leadership will try and pull back the space they conceded to AAP.

AAP also faces challenges in the form of Nitish's JD-U and Yogendra Yadav-led Swaraj Abhiyaan debuting in the Delhi MCD polls. JD-U particularly could cut into AAP's crucial poorvanchali votes in the state.

And lastly, the now humbled party will have to take a relook at ticket distribution for the must-win MCD polls. Dissidents may have to be placated and a few candidates may even need to be changed. ‎ 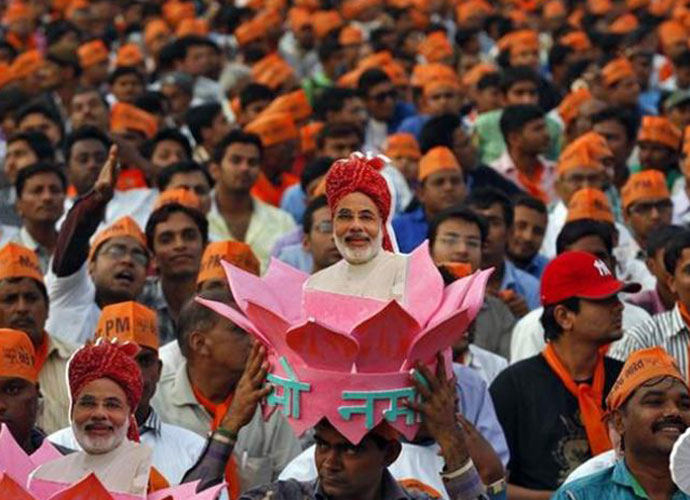 AAP supporters and volunteers will now have to take on an energised BJP cadre. Photo: Reuters

The civic polls will now be the biggest test for AAP, with opponents already trying to make it a referendum on Arvind Kejriwal's style of governance in Delhi.‎

The dismal performance in Punjab and Goa has dealt a blow to AAP's national expansion plans. After giving it all for more than a year in the two states, the party leadership was already planning its move in Gujarat and Himachal Pradesh. But now, a credible review is required. Many now feel that the time has come for a tactical retreat and to concentrate on again holding back it's citadel of Delhi. ‎

AAP had attached high hopes to its tested shock-and-awe formula ‎and was eyeing a big bang victory in Punjab before taking the momentum in states like Gujarat. With the Congress winning Punjab and doing well in Goa, AAP's hopes of snatching electoral ground from the Congress and presenting itself as the only alternative to the BJP have been dashed, at least momentarily.

It also seems that people have rejected AAP's narrative against demonetisation and against the Modi sarkar in both Punjab and Goa; the party will have to restrategise its narrative in the states it wishes to expand in. ‎

Smooth governance for the remainder of the term in Delhi is going to be the next challenge for Kejriwal and Manish Sisodia. The AAP-led Delhi government has had an extremely confrontational run with the PM Narendra Modi-led Union government. Kejriwal's bitter affair with former Delhi Lieutenant Governor Najeeb Jung with daily bickering is still fresh in people's minds. ‎

The Delhi government, which was already facing administrative challenges due to its unconventional approach ‎in dealing with the bureaucracy, will now find it even tougher to get the babus to fall in line. The party was hoping a win in Punjab would give it greater elbow room, in some way help it to browbeat the Delhi bureaucrats into submission.

The Kejriwal-style of governance with him being a supervisory CM will also be questioned. With one cabinet berth vacant in Delhi, the perception is of AAP being a non-serious player.

Not just at the 2019 national election, Kejriwal will have to divert his energy towards governance in Delhi as well.‎ The Delhi CM and his cabinet will have to rethink their way of dealing with administrators. And certainly rethink their strategy of playing the victim card.‎

In conclusion, now is the time for AAP to retreat, restrategise, rework and return to tackle these immediate challenges.‎

Post your comment
#Delhi Polls, #AAP, #Assembly elections 2017
The views and opinions expressed in this article are those of the authors and do not necessarily reflect the official policy or position of DailyO.in or the India Today Group. The writers are solely responsible for any claims arising out of the contents of this article.

Journalist with India Today TV. Strongly believes, time of crisis and change is a time of incredible opportunity.