BJP has no excuses now, it better work for the people

The huge mandate would mean a stable House.

The political reverberations of Uttar Pradesh will be felt long after the euphoria of the win has subsided. The win will provide the BJP-led NDA government the room to pursue their agenda unhindered.

The big reforms we were looking for do not need to be a collection of smaller reforms. The people's mandate allows a single-minded PM to chart his own course. Soon the Upper House, the Rajya Sabha, will be going the NDA's way. For the ruling dispensation there would be no more excuses now on.

The political pendulum across the nation would shift. Priorities, attitudes, political stands et al. The huge mandate would mean a stable House. Allies will not rock the boat and the Opposition would get disheartened.

However in states where regional satraps rule the roost there will be a realignment of attitude - "post-truth" realisation would probably dawn soon in West Bengal, where you can expect fiery CM Mamata Banerjee to tone down her berating of BJP and Narendra Modi, not only because of the number at the Centre but also because BJP emerging as the largest opposition party should suit Didi well - for the next 10-12 years at least.

In neighbouring Odisha, Naveen Patnaik has a kind of no-war pact with the BJP - they were not allies but are certainly not enemies. The UP results and the huge gains BJP made in the Panchayat polls in Odisha means BJD leaders are expected to sharpen their attack against the BJP - the trend will gain steam as 2019 approaches and the ruling BJD faces state polls. Whether BJP can consider BJD an ally in the opposition in the Lok Sabha remains to be seen.

Down south, Edappadi Palanisamy faces a Hobson's choice. In the absence of Sasikala, he faces the odd challenge of either sticking to the party MLAs who stand behind him or the mass support base of AIADMK whose favourite seems to be the ousted OPS.

Although media insiders say Tamil Nadu is "imminently-poll-bound" it would indeed be a foolhardy decision to give up about four years of a hugely popular mandate. If the AIADMK grassroots support base has shifted its loyalty it could trigger a DMK revival, or provide BJP with a credible vehicle in the state.

Whatever their faults are, Kalaignar Karunanidhi and the late Jayalalithaa had kept the light of Dravidian politics burning and prevented the rise of rightist forces in Tamil politics. Alas, Amma is no more and Kalaignar is too old to lead and the incumbent CM may find that the space he needs for political manoeuvres are indeed constricted - both at the state and national level. 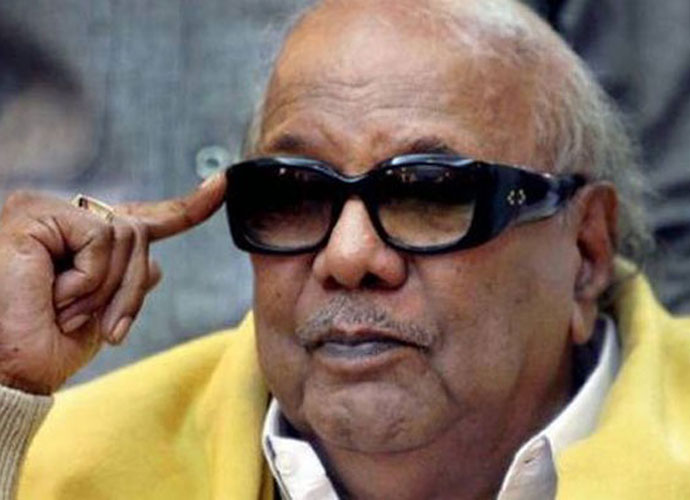 Amma is no more and Karunanidhi is too old to lead. Photo: Reuters

Karnataka will see polls in 2018 - BS Yeddyurappa has been cleared of all charges and is back with a bang. The ruling Congress is not having the best of luck or run in office. The BJP is expected to do well and has started groundwork.

Next week, senior Congress leader and former CM SM Krishna would formally join the BJP, leaving his political "house" of 46 long years. Neighbouring Andhra is headed by ally Chandrababu Naidu and he lends a solid base for the BJP down south. Once Karnataka is conquered, the so-called northern Indian party would have made inroads in southern India.

Manipur threw up a fractured mandate but if you consider that it was hitherto alien territory for BJP, the results should be most encouraging. BJP getting rid of the Assam bogey has helped it find a foothold in the North East.

The "after me, who?" is a question that should be deeply troubling to regional leaders. Some of them do not have a credible alternative or political heir. Their own popularity guides the parties and most do not have the organisational structure to sustain themselves against a cadre-based, disciplined party.

Next pit stop will be the Delhi municipal elections. The AAP setback may affect the outcome - it as well may not. That a retreating Congress tide has left a vacuum in vast swathes of upper-central India is a fact.

The thought process that says you can position yourself as a replacement for the Congress in under three years is a "brain fade" (bless Smithy). It takes years to build up a grassroots organisation, not to say winning the trust of the people.

And lastly once you have a mandate - work - create a good impression - because we the people have mandated you to do so.

Also read: Yes, I was wrong about BJP not winning Uttar Pradesh elections

Post your comment
#BJP, #Assembly elections 2017
The views and opinions expressed in this article are those of the authors and do not necessarily reflect the official policy or position of DailyO.in or the India Today Group. The writers are solely responsible for any claims arising out of the contents of this article.