Yes, I want a bullet train but what Mumbaikars need is better local rail network

Friday's tragedy was just a prelude to bigger disasters that will very soon follow if immediate measures are not taken.

It was a usual morning. I had just left for work when one of my reporters called and informed about a supposed stampede at the Elphinstone Road railway station. I asked the reporter to gather all the facts and said that I would get back to him.

I hung up the phone in a hurry and the first person I called was my wife. She gets off at the same Elphinstone Road railway station every day to reach her office in Worli. The first call went unanswered. I called up again, desperately hoping to hear her voice.And this time she did answer the phone. I cannot explain the sense of relief on hearing her feeble “hello”. She told me she is in office and that she had seen some commotion on the north-end of the foot-over bridge while she got off the train. So, she took the south-end bridge, she told me matter-of-factly. I heaved a big sigh of relief.

The second call was again to the same reporter who by then confirmed the news - it was indeed a stampede and many people including women and children had lost their lives. I immediately called out for all my team members - who had been working on some or the other story across the city - and rushed them to the spot.

As we all got down to work, pictures of my own local train journeys during college days kept flashing in my mind. From Goregaon to Churchgate, I used to travel during the peak hours. It used to be an everyday battle, my wrists and forearms grew stronger and stronger as they bore my body weight while I somehow managed to keep myself inside the train during those commutes. Looking at the condition of the roads and road transport, Mumbaikars prefer local trains as it takes lesser time. And despite all the jostling, pushing pulling and cursing, somehow people do reach their destinations mostly on time. It is our “most-efficient” mode of public transport in terms of punctuality even though the most-dangerous mode. 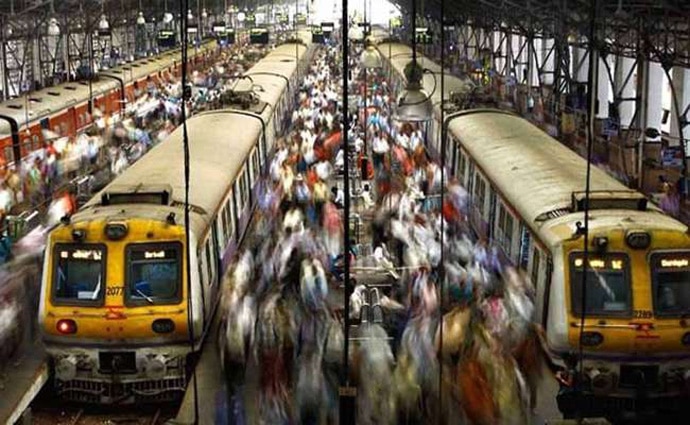 Since 2005, Mumbai has suffered several terror strikes and natural calamities which have led to a large number of casualties across the city, but only travelling in local trains have caused more deaths when compared with other tragedies. According to this 2015 report, nine people die on Mumbai local train tracks every day, as commuters fall off overcrowded local trains or get run over while crossing railway tracks. Despite being pulled up time to time by the courts, the railways till date do not have any mechanism in place to reduce the number of deaths on trains or tracks.

According to this IndiaSpend report, in 1952 the number of people using the Mumbai suburban railway services was 292 million, while in 2016 it shot to 2.7 billion passengers which is almost eight times higher. Infrastructure barely grew and the same report says that the increase in services was 3 per cent.

A nine-car Mumbai local train that has a capacity of 1,700 passengers carries 4,500 passengers during peak hours which clearly shows the burden that the suburban train network bears.

Friday’s unfortunate incident happened on the same day when the newly appointed railway minister Piyush Goyal was coming to town for the first time after being “awarded with” the railway ministry. He was slated to announce hundred new services for the suburban network. This incident has put a stop to all his grand announcements that he wanted to make in his home city.

The gravity of this incident is such that Goyal has called his whole team for a review. He also announced the same on Friday after the incident, but I really wonder if it will help improve the suburban network.

Be it the Dadar railway station, or Bandra, Andheri, Thane or Dombivali, this incident was just a prelude to bigger disasters that will very soon follow if some immediate measures are not taken by the ministry.

There have been several committees, recommendations and court directives on reducing the crowd on local trains as well as the stations, but till date, nothing seems to have brought about any change. What is needed is a real transformation of the entire local network. And that cannot happen with a budget-to-budget allocation, but a continuous process that will require hard work, integrity and the political will.

I do want and would love to have a bullet train which would connect Mumbai to Ahmedabad or any other city and state, but it would be better if the primary requirements of the Mumbai suburban network, like less-crowded trains, clean premises and wider foot-over bridges and platforms, are initially met.

This may seem like wishful thinking but is something that Mumbai and Mumbaikars badly need and deserve.

#Local, #Railway Station, #Stampede, #Elphinstone Tragedy
The views and opinions expressed in this article are those of the authors and do not necessarily reflect the official policy or position of DailyO.in or the India Today Group. The writers are solely responsible for any claims arising out of the contents of this article.