The trains ran on time, the press crawled: An Emergency lesson was that Indians are not obsessed with political freedom

We romanticised the 1977 election ending Mrs Gandhi's rule. Sterilisation and the Opposition's imprisonment showed the Gandhis to be amateurs. Anyone could learn from their mistakes today.

Each year, when the end of June approaches, it is customary for all of us to remember the Emergency (declared in June 1975) and to pat ourselves on our backs. It was a terrible time, we say. But it was an aberration that only lasted for a year and a half. That is how long it took for the democratic spirit of the Indian people to re-assert itself.

The more I think about the Emergency and the way it ended, the more I feel that we have romanticised the results of the 1977 election and overstated the Indian urge for democracy.

Let us start by recalling the results of that election. In the popular imagination, India threw out Indira Gandhi and voted for a return to democracy. This is not wrong — Indira Gandhi did lose her own seat in Rae Bareli — but we sometimes overstate the scale of the Congress’s defeat. The last word: Was she really 'thrown out'? The election results do not suggest so. (Photo: AP)

When we say that India voted for democracy, we forget that the results were not national in character. Yes, the Congress was wiped out in North India. It won no seats in UP and only one seat in Bihar, for instance.

But it actually did quite well in South India — it won 26 out of 28 seats in Karnataka, 41 out of 43 seats in Andhra Pradesh and over half of all seats in Kerala. Even in states where it did badly, it was hardly wiped out — it won 20 out of 48 Maharashtra seats, for instance. Overall, the Congress alliance won 189 seats.

If the verdict had been one in favour of democracy, this North-South divide is hard to explain. Surely, South Indians care as much about democratic freedoms as North Indians do?

An alternative analysis, popular at the time but largely forgotten now, is that the verdict was not really about democracy. The Congress's defeat in the North was due to the heavy-handed implementation of the sterilisation programme. This was intended to be a voluntary scheme but under Sanjay Gandhi, Indira’s thug-like son who was her malevolent deputy, government servants were set ambitious sterilisation targets. These targets could only be met if men were coerced into being sterilised. So, the programme became one of compulsory sterilisation which led to a massive backlash and eventually, to the defeat of the Congress in the Northern states, where it was imposed with the most severity.

All of which begs the question — suppose Sanjay had not been obsessed (needlessly, as it turns out) with the population explosion? Suppose there had been no forced sterilisation programme? Would the North have voted so decisively against the Congress? Nothing nice about it: Sterilisation was supposed to be voluntary. But under Sanjay Gandhi, many were coerced. (Photo: India Today archives)

There is no way to be sure now but somehow, I doubt it.

Even if the Congress had done badly in the North, there would have been no wipe-out. The rout had much to do with the sterilisation program, portrayed during the campaign as a way of castrating the North Indian Male.

And with its victories in the South, the Congress may well have come back to power.

If the Congress’s defeat was due to a single programme and not due to any great desire for a return to democracy, then this might explain why the people of India were so ready to give the Gandhis a chance again in 1979. The government formed by Indira Gandhi’s opponents collapsed within two years — and by the end of 1979/early 1980, she had been voted back with a substantial majority. In fact, opinion polls had begun showing, from 1978 onwards, that she was the most popular leader in the country.

I recall all this only because we often draw the wrong conclusions from the defeat of the Emergency.

We forget that throughout the 1980s, opinion polls showed that Indians liked the Emergency and wanted it back. (By the 1990s, pollsters had stopped asking about the Emergency).

While we come to optimistic conclusions about the Indian love for democracy, we forget many of the realities of the Emergency era. Captain, our Captain: The Emergency also mirrored the yearning many Indians had for a 'strong leader'. (Photo: India Today)

And when he was elected by the voters of Amethi in 1980, something in Indian politics changed forever. You no longer had to work at the grassroots to be recognised by your party. It was enough to be a son or a daughter of a politician. Or a school friend even.

I often find myself wondering: What would have happened if Mrs Gandhi had prevented Sanjay from pushing his sterilisation programme? Suppose she had simply released the Opposition leaders she had arrested (at the start of the Emergency) in a couple of months and sent them home?

Would the people of India have minded the Emergency? Would they have cared about the loss of political freedoms and objected to the censorship of the press? 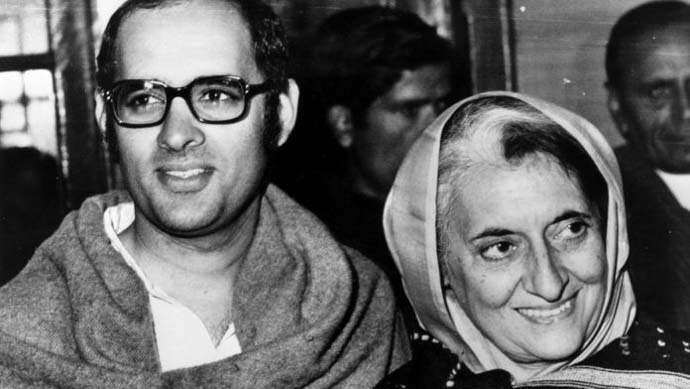 India escaped from the worst excesses of the Emergency with our democracy intact for two major reasons.

The first was Sanjay’s sterilisation programme. The second was Indira Gandhi’s desire to win Western approval by holding an election. She was told by the IB that she would win such an election, which is the only reason she called it. And she may well have won it, had there not been so much anger over sterilisation — a fact that the IB played down in its reports — and if the Opposition had not united to fight the Congress.

The lessons for any future autocrat are clear.

Indians are not necessarily obsessed with political freedoms. Improve their standard of living, increase the efficiency of government, stamp out petty corruption and give them a strong leader. And, by and large, people are happy.

As Mrs Gandhi discovered in the second half of the Emergency, you don’t even need to threaten the press — it is only too willing to fall in line. And you needn’t lock up Opposition leaders. Let them speak. Just make sure nobody reports what they say.

In many ways, as malevolent and undemocratic as their intentions were, Indira and Sanjay Gandhi were amateurs. Any future leader who has grasped the central message of the Emergency — that not all Indians care about press freedom or political rights — can succeed where the ham-fisted Emergency of 1975-77 failed.

Yes, we have much to celebrate when we think of the end of the Emergency. But let’s not kid ourselves. It was a damned close thing. We may have a right to pat ourselves on the back. But we have a greater obligation to make sure it never happens again.

Post your comment
#1977 lok sabha elections, #Sterilisation program, #Congress, #Sanjay Gandhi
The views and opinions expressed in this article are those of the authors and do not necessarily reflect the official policy or position of DailyO.in or the India Today Group. The writers are solely responsible for any claims arising out of the contents of this article.