So far BJP has shown a lack of appetite for the fight at hand in Punjab. But the party may just be gathering its ammunition.

Scheduled diplomatic engagements are for the cameras. The real negotiations and hard bargaining happen before and after photo ops. Deal breakers, therefore, work behind the cameras. The BJP has failed in achieving a breakthrough in farmers’ protests so far because it has no real deal breakers in Punjab. BJP’s problem is not the farmers' protest per se, but Punjab. Curiously, the party has looked more determined to win West Bengal, Kerala, or even Jammu and Kashmir, than it has looked hungry for the Punjab pie. What could have failed to arouse BJP’s appetite to go for the state is the difficulty of the task at hand.

The Shiromani Akali Dal (SAD) ostensibly parted ways with the BJP over the issue of farm laws, but the reality is SAD could have been waiting for the opportunity because BJP, a force to reckon with on the national stage, appeared to be a liability in the state. The Panthic Sikhs have no liking for the BJP and urban Hindu voters have decisively gravitated towards the Congress, having vacillated for long. 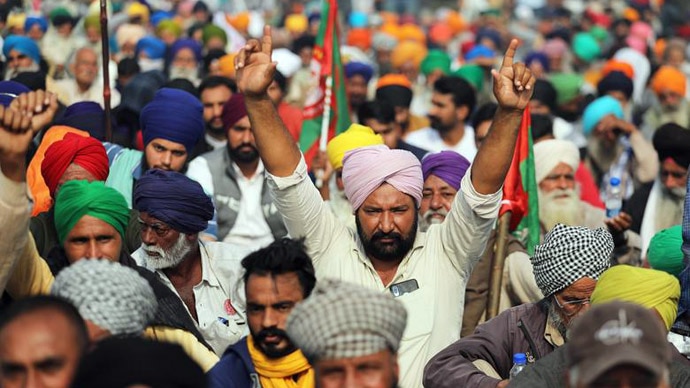 The BJP is finding it difficult to end the deadlock with farmers because it has no foothold in Punjab. (Photo: Reuters)

In 1947, the Sikh population of Punjab rose from 13% to 33%. The Hindu population increased from 28% to 64%. Punjab was then divided into two regions, Punjabi-speaking and Hindi-speaking. When in 1966 Punjab was reorganised, the Sikhs constituted a majority with 60% and the Hindus were 37%.

Then there are the caste and class dimensions and all of them interact. The Sikh-Jat-peasant identity is predominantly rural and Hindus-Khatri-trader is urban. The Akali Dal was dominated by the Sikh-Jat-Peasants and the BJP by the Hindu-Khatri-traders. The Congress represented both these competing identities.

In 1996, Akali Dal announced it was changing course, having burnt its fingers with extremism. At the Moga conference, Parkash Singh Badal announced the party was opening up it enrollment to non-Sikhs and changed its identity from Panthic (Sikh) to Punjabi with slogans like Punjab, Punjabis and Punjabiyat. The party shifted its office from Amritsar to the more cosmopolitan Chandigarh. As Badal became chief minister for the third time, Sikh issues were but on the proverbial back burner. Before the 1997 assembly elections, Badal sought a commission to probe police excesses. By 2012, he had even awarded such police officers to plum posts.

Despite Operation Blue Star and the 1984 riots where the state was found to be complicit, the Sikhs began to gravitate towards the Congress once again. The Congress ensured Sikh leaders were rewarded with posts and perks. Giani Zail Singh was India’s President through the troubled period of 1980s. The Congress appointed Sikhs as ambassadors, governors and high commissioners. The 2004 appointment of Manmohan Singh as Prime Minister and Singh apologising in Lok Sabha for 1984 won over the community.

In a state that has 58% Sikh population, the BJP doesn’t have even one tall leader to project as its face since Navjot Singh Sidhu switched sides to the Congress. In states like Maharashtra and Bihar, the BJP has been able to come out of the shadows of its regional allies and merge as the big brother. But in Punjab, it has looked dependent on Akali Dal.

In 2016, Canadian Prime Minister Justin Trudeau took a jibe at Indian PM Narendra Modi, saying his Cabinet had more Sikh leaders than his Indian counterpart’s. Back then, Maneka Gandhi and SAD’s Harsimrat Kaur Badal were the two Sikhs in the BJP government. In 2019, Harsimrat Kaur was joined by Hardeep Singh Puri as the other Sikh in the Cabinet. Kaur has quit and Puri entered the Cabinet through Rajya Sabha after losing the Lok Sabha election from Amritsar.

In the Punjab assembly, the BJP has just two MLAs. The Sikhs constitute just 2% of the population but wield considerable influence because they are an enterprising community. And even though Punjab has only 13 Lok Sabha seats, the state is strategically important because it is a border state.

Farmers in Punjab have refused to listen to the BJP and so the BJP leadership has been talking to farmers in Gujarat, Bengal and Madhya Pradesh but it is Punjab that BJP needs to win over.

It isn’t like the party hasn’t tried. The Modi government decided to open up the Kartarpur Corridor at the height of India-Pakistan tensions. It also set up a Special Investigation Team in the 1984 riots cases. The BJP government also tried to make a cultural connect by through observance of 550th Guru Nanak Gurpurab celebrations. And yet, most of its olive branches have not seen an outpouring of support for the party.

In most states, the BJP’s rise has been congruous with the rise and expansion of its ideological arm the Rashtriya Swayamsevak Sangh (RSS). In Northeast, for instance, chants of Jai Shri Ram at shakhas preceded electoral victories. Sikhs in Punjab are wary of the RSS because of the Sangh’s insistence of seeing Sikhism as a sect of Hinduism. Sikh radicals have warned the community against the possibility of Sikhism being denied the identity of a separate religion if RSS was allowed to expand, given the organisation’s insistence on Hindu unity.

In 2004, Akal Takht issued a hukum nama (an edict) against RSS’s Sikh arm the Rashtriya Sikh Sangat, declaring it anti-Sikh. The Sikh Sangat as a result opened units in Delhi, Haryana, Rajasthan, Uttar Pradesh, Maharashtra and Madhya Pradesh, but failed to gain a strong foothold in Punjab.

It is significant that the BJP did not try to woo back the Akali Dal, its ally for 24 years. Perhaps, the BJP has realised that it needs to stand up on its own in the state where it is just an urban party, much like what BJP was nationwide in 1980s.

With about 10% vote share in 2019 and just two MLAs and two MPs from Punjab, BJP faces a tall task ahead which will continue even after the farmers' protests have ended.

Also Read: Why the Farm Bills resulted in farmer protests

#BJP, #Akali Dal, #Punjab, #Farmersprotest
The views and opinions expressed in this article are those of the authors and do not necessarily reflect the official policy or position of DailyO.in or the India Today Group. The writers are solely responsible for any claims arising out of the contents of this article.