What's cooking in the kitchen of 'Federal Front'?

From Farooq Abdullah to KCR — why every one is visiting Mamata Banerjee all of a sudden?

It has been a week of unexpected twists and turns in the Bengal political scenario.

When the victory of the Congress in the Assembly elections of three states, and a stronger and resurgent UPA had almost negated the need for a third political combination to take on the BJP, the 'Federal Front' bubble is bobbing its head all of a sudden.

And this time, Mamata Banerjee has again initiated the move — though her task was made easier by DMK leader MK Stalin's effusive outpourings at the unveiling of his father's statue.

Flanked by Sonia Gandhi in Chennai, Stalin proposed that Rahul Gandhi be made the prime ministerial candidate for the Opposition ‘mahagathbandhan’. Obviously as expected, Rahul was blushing and Sonia's calm composure saw feather-touch facial twitches. Mamata Banerjee, it seems, has got a new lease of life. (Photo: PTI)

But, even as the other veteran politicians in the Opposition block were measuring their moves, Mamata was the first to turn down the proposal.

She said that the issue can only be decided after 2019 elections, if the Opposition alliance emerged the winner — clearly expressing doubts over the winnability of the ‘mahagathbandhan’, a strange change of tack for a person who once sounded so sure of inching closer to ousting the Narendra Modi government.

BSP supremo Mayawati and SP chief Akhilesh Yadav backed her, saying they too would prefer to wait and watch.

TRS chief and Telangana CM K Chandrashekar Rao, who has just scored a remarkable win in Telangana, was not prepared to give a walkover on the PM issue. After all, he too felt competitive as a regional player.

Even the Left, led by Sitaram Yechury, which shares a good relationship with the Congress, is willing to wait for the electoral verdict.

Mamata Banerjee, it seems, got a new lease of life. She started attacking Modi and the Centre on social media with renewed verve and vigour.

National Conference leader Farooq Abdullah, who came to attend a conference of the Bharat Chamber of Commerce in Kolkata, was heard talking about the contribution of the Nehru-Gandhi family in India.

Drawing a parallel between the Gandhi dynasty and the Modi era, he seemed to be testing the groundswell of support for Rahul Gandhi.

As everyone tried to read between the lines, Abdullah’s car turned around and went straight to the chief minister’s headquarters at Nabanna. Stalin proposed that Rahul Gandhi be made the prime ministerial candidate for the Opposition ‘mahagathbandhan’. (Photo: PTI)

After a one-on-one meeting, Abdullah left with a kantha shawl uttariya as the CM saw him off to the gate.

Soon, newswires were abuzz that Rao would also visit Didi on Monday.

The two have not been talking since Rao embraced Modi in August and demanded a special package for Telangana. He also supported the NDA candidate for the post of Rajya Sabha vice-chairman.

In March 2018, Rao had called on Mamata to set the ball rolling for a non-BJP, non-Congress alliance.

His volte-face reportedly hurt Mamata to the extent that she dropped Rao's name from the list of invitees for her Brigade Parade ground rally on January 19, touted to be a great show of unity of the key Opposition players.

Rao does not appear to have taken it to heart.

He came to Mamata to encourage her to form the 'Federal Front'. He also seems to have taken BJD leader and Odisha CM Naveen Patnaik on board. 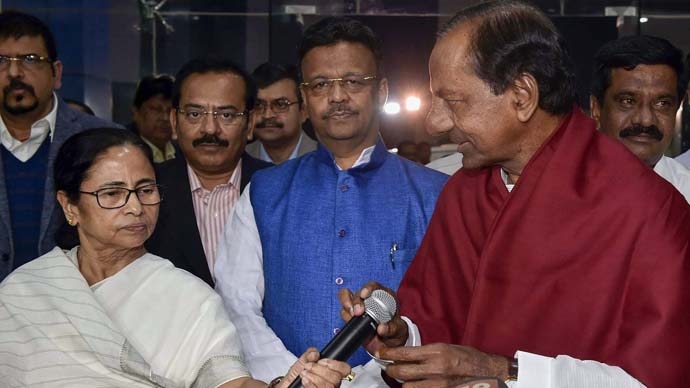 The 'Federal Front' juggernaut apparently stumbled on roadblocks when KCR inclined towards the NDA. (Photo: PTI)

Already, there’s chatter about Rao and Mamata's intention of having a third Opposition alternative — which would only split the Opposition votes.

TDP supremo and Andhra Pradesh CM Chandrababu Naidu has publicly expressed on more than one occasion that he suspects Rao of playing a go-between to strengthen Modi's hand.

The Congress High Command is well aware of the situation and not in a hurry to declare the PM candidate. It is willing to wait and let the numbers speak for themselves, just like in the recent Assembly elections.

Those who were sceptical of Rahul breaking from his ‘Pappu’ image are now pinning hopes on him, including many in the 'Federal Front'. But the Congress is keeping its aspirations in the background and stoking regional players’ ambitions, as they will be key contenders to the BJP in majority of the states. Whatever be the reason and the intention, the 'Federal Front' has resurfaced.

Mamata is visibly happy and so is the BJP, which is not pushing hard for its proposed ‘rath yatra’ in Bengal. It's letting the court take a call.

Amit Shah and Modi do not seem too keen on a saffron carpet bombing in Bengal yet.

Meanwhile, Rao asserts it was his mission to push for and shepherd a non-Congress and non-BJP platform.

Also Read: How Mamata Banerjee has emerged as the face of the anti-BJP brigade

Post your comment
#Chandrababu Naidu, #Congress, #KCR, #Mamata Banerjee
The views and opinions expressed in this article are those of the authors and do not necessarily reflect the official policy or position of DailyO.in or the India Today Group. The writers are solely responsible for any claims arising out of the contents of this article.