[Book extract] The man behind the famous surname.

There were obvious differences between Feroze and his wife when it came to the attitudes towards their children and their upbringing. About Sanjay Gandhi and his relationship to his parents, Girish Mathur tells us through Janardan Thakur that Sanjay Gandhi was his mother’s pet.

She felt something very special for him all along, had the so-called soft spot for him. She would go out of her way to defend him and would even lie for him. When he would fail in class and Feroze Gandhi chastised him, his mother would come forward and say, "Oh, no, he hasn’t failed, I know there must be a mistake. I will talk to his teacher…."

Bishambar Nath Pande made a similar observation: "Feroze and I were busy in running various institutions. When he was given the responsibility of managing the affairs of National Herald at Lucknow, I was elected the municipality chairman of the electricity board of Allahabad. Sometimes when I went to Lucknow I met Feroze. He was a strict disciplinarian. I remember that there used to be exhibitions in Lucknow. Feroze went to an exhibition with Indiraji and the little Rajiv. I was also there and we met them. Little Rajiv wanted to have a balloon.

"Indiraji said, 'He is a child – a small child – if he wants a balloon, why do you object to it?' Feroze said, 'Such things will spoil children.'

"I also pleaded the case of Rajiv, but Feroze did not hear. He said, 'If you give them balloons and other things and toys, there won’t be any spirit of creation. I will make something in his presence. I want to do something where the value of his hands and his brain appears."' He actually did make things in the presence of Rajiv and Sanjay. He told them that if "you can work with your hands, you will never starve."

One day Nikhil Chakravarty went to Feroze Gandhi’s house for lunch. Rajiv and Sanjay were there doing carpentry. Feroze told Chakravarty that Sanjay was "bright", but Rajiv was "dull".

Prema Mandi, a friend of Feroze, said, "When Rajiv and Sanjay visited his allocated house at 18, Queen Victoria Road, Feroze wanted to be alone with them. No one else was permitted into his fairyland when they came. The colleagues, his friends, the journalists and others who in the evenings descended upon his house were not admitted at those occasions. Feroze let Rajiv and Sanjay wash his car, and while dignitaries of all kinds gave the boys expensive gifts on their birthdays at Teen Murti, Feroze’s gifts were different and stood out compared with them. He used to give them kites, jelly-beans and similar things." 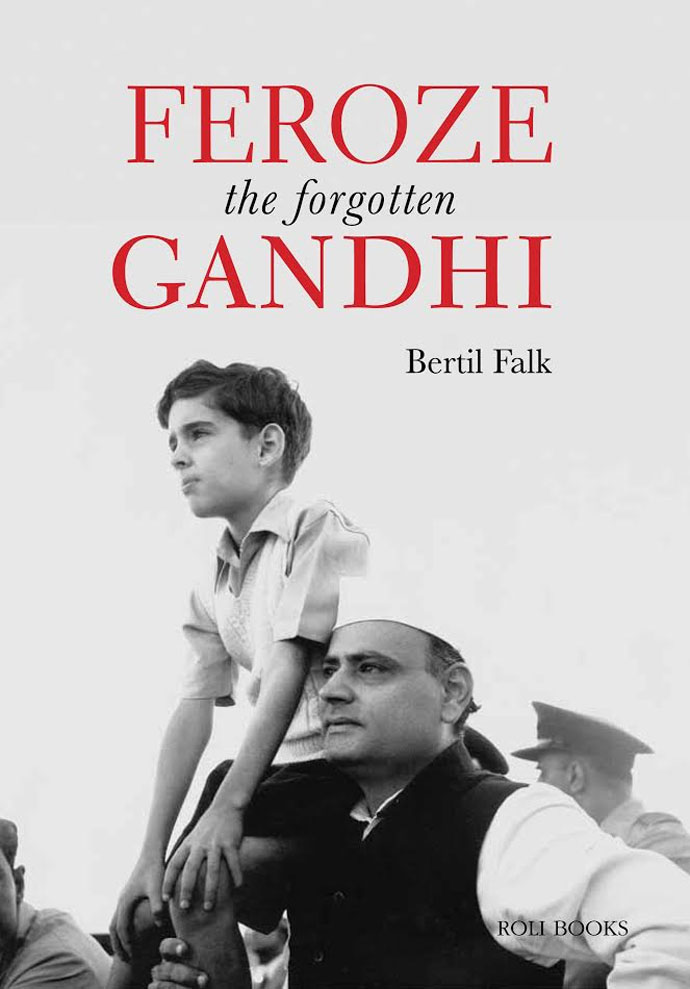 Indira Gandhi shows more absent-mindedness, a vagueness of memory, when it comes to her sons and their toys: "I can’t recall them asking for toys and things like kids. We had to think of what they would like us to give them."

But she remembers that when "the boys were young, if there was an electrical problem, my husband would say, 'Come on boys, fix it!' And they would."

Rajiv, who was very fond of his father, is really the only one in the family who publicly praised Feroze and spoke fondly of him.

Rajiv recalled, "I was very close to my father, especially his interest in hobbies. Doing things together kept us together. He was a bit reserved. He was quiet. At the same time he had a very good sense of humour. He liked doing things with his hands. He had a little workshop and he was always doing things. He taught me the dignity of labour. 'Don’t hesitate to work with your hands. Speak straight and truthful. Don’t hesitate to intrude. Speak out,' he said."

Amitabh Bachchan is not only the great superstar of Indian movies and probably the world’s most famous actor. He was a good friend of Feroze’s son Rajiv. In fact, the profound friendship between the families of Rajiv and Amitabh began in Allahabad, where both families lived.

Bachchan remembers: "My father was a poet of repute and at that point of time Mrs Sarojini Naidu, who was also a great poetess and who was a great lover for my father’s poems, introduced my father to Panditji. The friendship between Indiraji and my mother, who were more or less of the same age group, and Panditji grew. Then we arrived as children. Rajiv came to my fourth birthday party and everybody was in fancy dress."

Amitabh Bachchan recalls that both Rajiv and Sanjay "were always very fond of gadgets, whether musical equipment or a new transistor radio, or some kind of machinery or motorcycle, bicycle or car. They were always very keen about it. Probably, they got this from their father, Mr Feroze Gandhi. Who was mechanical-minded. He was always helping them out in their mechanical problems, repairs of car, motorcycle or pedal cycle that was not working properly. He was always there to help them to rectify it."

A series of selfies, long before the word was invented, taken by Feroze Gandhi in London. (Courtesy NMML, New Delhi.)

Seven years before these words of Amitabh Bachchan in the Hindustan Times, he had been interviewed by Dharmyug in 1984, after the assassination of Indira Gandhi, when Rajiv Gandhi succeeded his mother as the prime minister of India.

He told writer Pushpa Bharati that Rajiv had a special habit ever since his childhood to break up new toys into pieces and then join them again and this urge spilled over to Amitabh as well.

In that connection, Amitabh remembered that some time in 1959 or 1960, his own father Harivansh Rai Bachchan returned home from abroad and brought a transistor and tape recorder. "These things came to our house for the first time. I dismantled these pieces as Rajiv, my friend, used to do. I enjoyed it. It was a thrill, since I was myself independently doing the thing, which I used to see Rajiv doing. But when everything was taken to pieces, I could not reassemble it. I tried my level best, but all in vain."

Scolded by his parents, Amitabh went to Rajiv. "You alone can help me, Rajiv," said Amitabh Bachchan. "Come along and help me." Rajiv laughed at that and said: "Don’t worry. It will be all right within a short time." Rajiv went to Amitabh’s house, and within no time the parts were re-assembled.

In addition to this, Amitabh states that Rajiv inherited his mechanical sense from his father. "I remember, we had a radiogram with a big cabinet," Amitabh recalls. "It was not working as Direct Current electricity was in use in Delhi and the radiogram could only be operated with Alternating Current. In those days converters were not common."

Amitabh told Rajiv about his problem.

"Let us go to Papa," Rajiv said. "He has a machine, which he has made himself. Perhaps that machine could repair and make your radiogram work. We can borrow that machine from him."

"On that we both went to Feroze Uncle’s house," Amitabh recalls. 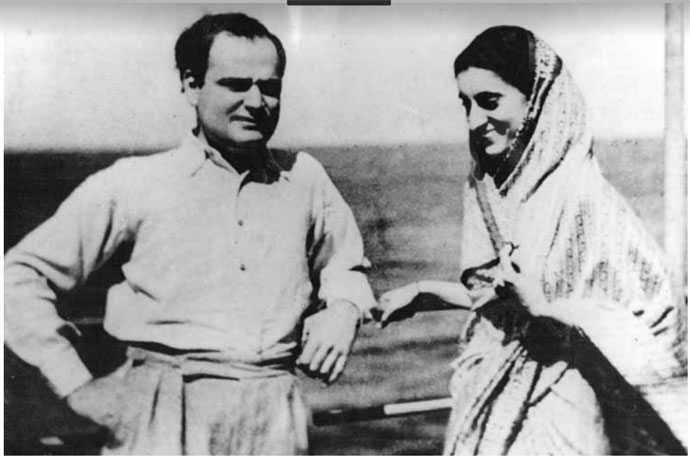 Feroze and Indira Nehru on their way back to India from Europe. It was after her return that Indira first spoke to Nehru about her decision to marry Feroze. (Courtesy NMML, New Delhi.)

"Oh! How nicely his room was decorated. Everything was arranged very systematically. It was very neat and with very special nobility. If today we see the room of Rajiv, you will find the same atmosphere, neatness and perfection without any confusion. Hearing our problem, Feroze Uncle laughed at us and was gladly ready to come to help his son’s friend."

Now the problem of Feroze’s equipment was that it was not a small thing that could be lifted and put on the seat of the car. It was bigger and heavier than the radiogram.

"Somehow it was brought to my house and after a lot of attempts Uncle could start our radiogram. How much noise was there on that day because of that machine! Rajiv got his love for kits from his father. Rajiv has knowledge of the latest technology and advancement in electronics.

"Feroze Uncle may not have been any technical wizard, but he used to try to understand each and every part of any machine that he used. The basic nature of Rajiv is similar to that of Feroze. Whatever he does, he does it with a system and understands it fully."

PD Tandon had experienced Feroze Gandhi’s interest in technology in Allahabad in the 1940s. "Feroze was interested in mechanical things. He was doing many things about cars and was always seen lying under his own car or attending to someone else’s car. Whenever he was doing that he was very much involved in it. Once when I came with him in a car and we were entering the entrance gate of Anand Bhawan, I was afraid that the rear of the car would be too wide to go through the gate. Feroze then taught me that if the front of a car can go through a gate, then the rear will also go through it."

Also read: Pranab told me how upset he was when Rajiv Gandhi snatched PM chair from him

#Book Extract, #Nehru-Gandhi, #Indira Gandhi, #Feroze Gandhi
The views and opinions expressed in this article are those of the authors and do not necessarily reflect the official policy or position of DailyO.in or the India Today Group. The writers are solely responsible for any claims arising out of the contents of this article.

The writer is a Swedish journalist and author of 'Feroze, The forgotten Gandhi'.