Where the future of Pakistan's democracy is headed

Despite the military establishment's overreach, the country is well on its path to becoming a pluralistic and progressive society.

Democracy in Pakistan has been subject to the perennially constant factor of "security first", and building democratic institutions later, to use an oft-repeated cliché, in use for well over six decades in the country.

Traditionally speaking, the overreach – albeit ever-increasing since the 1950s – of the unelected institutions, that is, the military, higher judiciary and civil bureaucracy (historically beholden to the military establishment’s virtual monopoly of the decision-making powers in key areas such as foreign policy and defence to name a few) have collectively dealt severe body blows to Muhammad Ali Jinnah’s vision of a pluralistic, progressive and democratic Pakistan.

His August 11, 1947 speech delivered to the Constituent Assembly is something that liberals tend to fall back on when confronted with the theocratic state that Pakistan has threatened to transform into on different occasions in history.

Some would argue that the damage that all that has wrought is irreparable, and hence, fatal considering how the idea of Pakistan unravelled in 1971.

However, despite the odds, the country has precariously lurched from one autocratic rule to another, but has managed to survive with, but not necessarily due to, intermittent bouts of democracy in between.

The watershed moment perhaps came in 2013 when transition of power from one elected government to another took place peacefully, via popular vote when the Pakistan People's Party (PPP) was voted out paving way for Nawaz Sharif’s Pakistan Muslim League (PMLN) forming the next government.

Raza Rumi in latest book, The Fractious Path: Pakistan’s Democratic Transition, offers a critical analysis of the dynamics of Pakistani politics in a scholarly fashion, especially with respect to its peoples’ democratic aspirations and lessons learnt from the past. 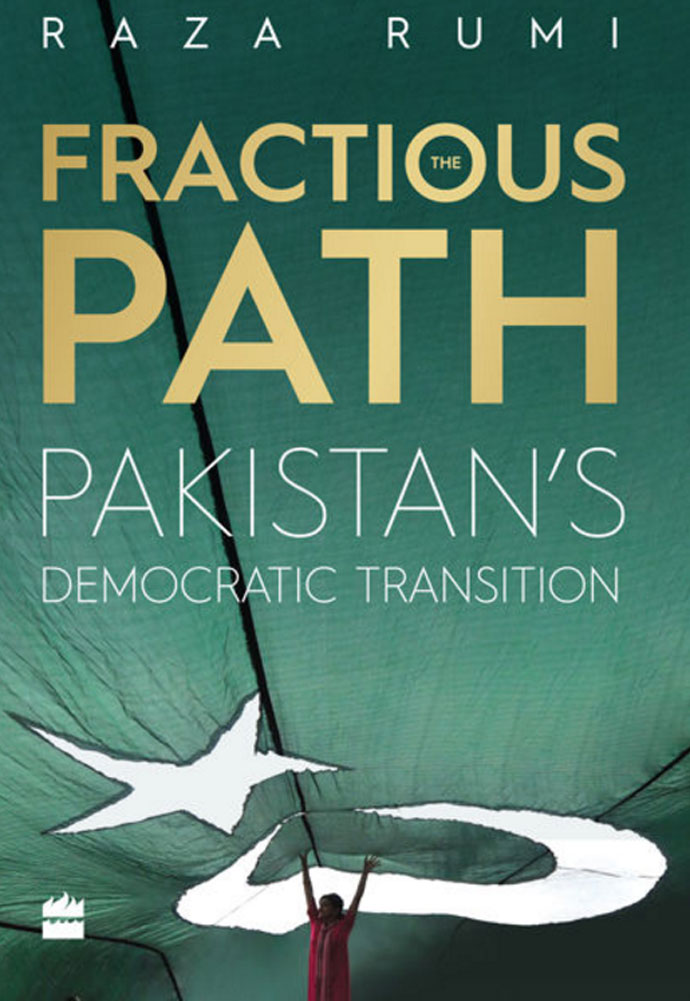 The Fractious Path, Pakistan's Democratic Transition is a compilation of articles and essays written by the Raza Rumi between 2008 and 2013 published by Harper Collins India.

The problem, according to Rumi, lies with the historical role (which still continues but in newer, more fancy and palatable notions) of Pakistan’s unelected institutions, viz the military, the judiciary and now the media.

All these institutions and sections of society under their influence perpetuate the myth that democracy is dangerous, and once elected, the political leaders are prone to compromising the country’s sovereignty, as opposed to military autocrats who are painted as the only patriotic and balanced option that the country can offer.

According to Rumi, the Lawyers’ Movement of 2007 started against a dictator but increasingly came to be known and owned by the conservative Right. The Zardari government’s prevarication post the Benazir Bhutto assassination in restoring the judges fired by Pervez Musharraf added a new chapter of complete stalemate, but this time with different protagonists, that is, the elected government and the meddlesome judiciary.

Although the 2008-2013 PPP administration staggered from one crisis to another, almost all artificially engineered, the voters’ faith in democracy did not waver as was hoped by those harbouring anti-democratic designs.

The net result of the above war of attrition meant that the Supreme Court, while fortifying itself against, what it perceived, an usurpation of its powers by Parliament of all institutions, it bizarrely and in a strange and perhaps unintended twist, seemed to be pandering to the wishes of the military establishment by embarking upon an anti-Parliament crusade with vengeance.

Unlike in any democratic society with a popularly elected chamber of deputies (National Assembly in Pakistan’s case), the Supreme Court in an unprecedented and bewildering move arrogated to itself the right to hold which parts of the 18th Amendment violated the so-called "basic structure" of the 1973 Constitution.

The net result: an unnecessary and thoroughly demeaning diminution and erosion of powers and, above all, dignity of an elected Parliament at the hands of an unelected Supreme Court.

Needless to mention that the 18th Amendment was passed unanimously by Parliament which could well be described as another watershed moment in the political and constitutional history of Pakistan, especially with respect to the abolition of concurrent legislative list giving more powers to the federating units, as originally envisioned by the framers of the 1973 Constitution.

As far as Pakistan’s foreign policy is concerned, notwithstanding its traditional India-centric policy, there have been signs of the realisation on this side of the border that friendly relations with its neighbours, especially India, have to be established but major groundwork still needs to be done.

False and hubristic nationalism espoused by the same elites serves to lend credibility to the extremist fringe in both India and Pakistan which needs to be avoided. Threats of waging a war in the context of the 2008 Mumbai attacks, according to Raza Rumi, will only strengthen the forces in Pakistan that have cherished confrontation, and silence the majority that wants peace with India.

On the surface, Pakistan’s nascent electronic media seems free and vibrant like in any democratic society, furtive, news hungry, sensationalist and eager to lay the story threadbare without any fear or favour. Scratch the surface and you will find a mindset at work that has no regrets in invoking military interventions to keep Parliament under check.

So where is Pakistan headed?

According to a number of commentators including Rumi, despite the military establishment jealously guarding its territory in the national decision-making process - not least vis-a-vis foreign policy and defence - and occasionally wresting back the role an arbiter during political fueds, Pakistan is well on its path to becoming a pluralistic and progressive society.

The above assertion is all the more significant when viewed in the backdrop of power being transferred in 2013 through the ballot and not courtesy the whims and sweet will of an "arbiter".

#Democracy, #Pakistan
The views and opinions expressed in this article are those of the authors and do not necessarily reflect the official policy or position of DailyO.in or the India Today Group. The writers are solely responsible for any claims arising out of the contents of this article.