Often, by time the PM gets his voice back, the cycle of violence has spiralled out of control and innocents have been maimed.

Conflicts are not negotiated through silence: we have suffered the pouted reticence of Narasimha Rao and the monkish silence of Manmohan Singh, even as their respective governments sleepwalked through a demolition and a series of scams.

But a wooden Narendra Modi is even more worrisome because his silence is often perceived to be strategic: that by both retreating and pointed avoidance, he is perhaps allowing the more voluble sections of the parivar to sway the opinion of the majority.

The leader of a party that does not tire of blaming the Congress for not addressing anti-Sikh violence with expediency is at least expected to show a little more alacrity in condemning a senseless cult of cultural violence.

Nor do articulate and expressive leaders wait for a groundswell of opinion to build in the streets before they take control of their vocal cords.

Mr PM, the world is so convinced about your own unfailing brilliance, why can't you then see the obvious connect between gau rakshaks and the thinly disguised hate campaign against the minority community? 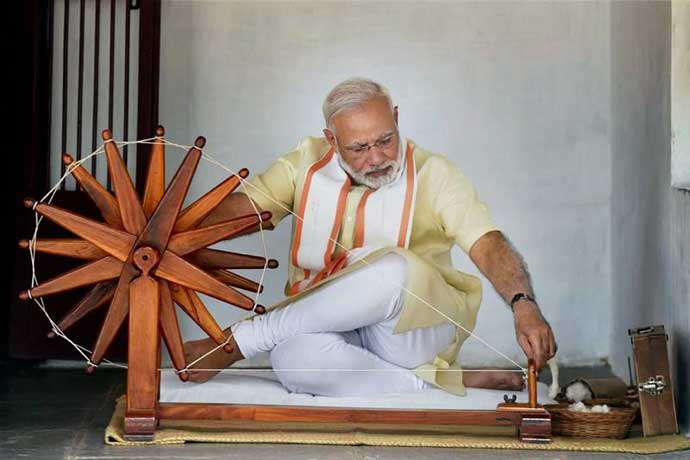 Sometimes silence can be disturbing for moral and ethical reasons, too. Photo: PTI

Why not come out with a unequivocal statement - not one couched in cow worship niceties - underscoring that nobody should ever be targeted because of who they are, what they look like, what they eat or how they worship.

There are times when a prime minister needs to calm down a nation, soothe its frayed nerves, banish its fears, exorcise its ghosts - past and present.

It is no big deal. All the nation needs is a reassuring word that the PM is sympathetic to any loss of life, that all lynchings are senseless - in the name of cow or otherwise - and need to stop forthwith, regardless of who is the perpetrator.

The nation can also do without trite expressions such as - ''violence never has and never will solve any problem'' - almost suggesting that there remains a larger "malaise" that still needs to be addressed.

Or is it Mr Modi that empathy for an average Muslim is not compatible with your majoritarian agenda and nationalism narrative? So, there is no mention of the 16-year-old Junaid Khan, there are no condolences for the victim's family, no attempt to show solidarity with the community.

The nation would also appreciate if the BJP leaders stop invoking Gandhi and reminding us of his ideals, making it a pretext for seeking cessation of hostility towards a community on the street. We would prefer if we were equally convinced of Mr Modi's unfailing humanism and he would say that he personally disapproves of any hate campaign against the Muslims.

It is ironical that whenever there is an opportunity for Mr Modi to either weave a new narrative or change the quality of public discourse, he ducks the issue, not realising that he is marginalising himself, which will leave him with very little room to manoeuvre in the run up to the general election. He will not able to put the genie back in the bottle!

The sense of dismay is even greater when one realises that the BJP has taken its eyes off its all-inclusive development agenda and instead sees its own fortunes as inextricably hitched to the tensions and schisms within the society.

It is a wonder how we have survived for the last 70 years without cow vigilantism! It is also a wonder how we have coped with myriad problems of this nation without the cow ideology! Unless, of course, you subscribe to the notion that there is no bigger national task than liberating the minority community from its culinary habits and no bigger agenda on the table than steak and beef curry!

When you wittingly or unwittingly allow a cult of cultural violence to take root; when you allow cow worship to become almost a national agenda; then you cannot suddenly take an about turn and distance yourself from the vigilante outfits. Then, there are few takers for your proud assertion that you endorse cow worship but condemn the violence that vigilantism has unshackled. And if you still expect a standing ovation for your outburst, then you surely don't know your countrymen.

When you allow your party spokespersons to be part of a virulent disinformation campaign in mainstream electronic media, where one anchor person has been given the platform to rave about who should speak, and who should be quiet on such a sensitive matter, the entire secular argument gets lost in the absurdity of "alternative facts". Such is the surreal world we live in.

So, it is indeed godsend that the PM is in control of his vocal faculties yet again. It was beginning to worry the nation that his deafening silence was on account of a serious medical condition that had afflicted his predecessor too and might require immediate attention of the ministry of health or the ministry of Ayush.

Such misgivings are bound to arise when an otherwise eloquent prime minister tends to get constipated on matters of national gravitas.

More so since he is neither in political hibernation, nor has he turned a social hermit; rather, as an avid user of social platforms, he has been gleefully putting out tweets on every possible subject under the sun, except the lynchings.

Sometimes silence can be disturbing for moral and ethical reasons, too. Often, by the time Mr Modi gets his voice back, the cycle of violence has spiralled out of control and innocents have either been lynched or maimed. This time it has taken him almost an year to recover.

Post your comment
#Modi, #Gandhi, #Hindutva, #Not In My Name
The views and opinions expressed in this article are those of the authors and do not necessarily reflect the official policy or position of DailyO.in or the India Today Group. The writers are solely responsible for any claims arising out of the contents of this article.