How Ganga can decide the 2019 Lok Sabha polls

For Rahul Gandhi, pledging to clean the Ganga is an opportunity to win the hearts of millions of Hindus.

River Ganga is worshipped and revered as a goddess in Hindu culture and is of supreme religious importance. According to the Puranas, Maa Ganga has her origins in heaven and was brought to earth by sage Bhagirath who knew that if the Ganga flowed on earth as she had from the head of Gangadhari Shiva, she would not only induce power but would also help in liberating the ashes of his ancestors.

Since then, Goddess Ganga – or River Ganga – has held immense significance in the religious and cultural practices of Hinduism and has become an integral part of Vedic folklore.

Ganga is the mother of Bhishma Pitamah, sister of Maa Parvati and companion of Lord Shiva as described by the Puranas. The Ganga and its tributaries are also associated with the birth of Kumaraswami (son of Lord Shiva), sister of Maa Parvati and Lord Krishna, Karna and epic characters like Santanu and others. The purity and sanctity of Ganga can liberate supreme consciousness or pure chitshakti, along with liberating beings from the cycle of life.

From divine intervention in ancient days to human invasion in medieval India, Ganga has always been the ultimate source of survival for civilisations for centuries. The significance of Ganga is such that not only is it of extreme importance to Hindus, but other religious icons too, such as the Buddha and Mahavira, also travelled along the banks of the Ganga.

For Hindus, the holy Ganga is the heart of India’s cultural landscape. The 2,525 km-long Ganga flows through Uttarakhand, Uttar Pradesh, Bihar Jharkhand and Bengal before reaching the Bay of Bengal. Along with its tributaries, it covers 11 states that are home to 600 million people and serves water to 40 per cent of India’s population. From divine intervention to human invasion, Ganga has always been the ultimate source of survival for civilisations. (Photo: PTI)

It originates from the Gangotri glacier on the foothills of the Himalayas in northern Uttar Pradesh and from there, it becomes the source of Bhagirathi and joins Alaknanda to form Ganga at Devprayag. From Devpragay, it flows into the Bay of Bengal.

For Hindus, places like Haridwar, Kashi, Allahabad and all the banks of river Ganga and its tributaries are as sacred as a temple and are a centre of all the religious rituals. Hindus not only seek moksha but also believe that the purity of this water is such that a holy dip in Maa Ganga washes away all the sins that one has committed in their lifetime. The piousness of divine Ganga is such that a drop of the holy water is considered “amrit” for Hindus. The significance of the cow, Ayodhya and Ganga in Hindu culture is immense — but the Ganga is a way of life and the faith attached with it is that of emotional and spiritual motivations.

The unique place of the river Ganga in the shaping of our pluralistic cultural ethos was captured most beautifully by India's first PM, Pandit Jawaharlal Nehru.

“The Ganga, especially, is the river of India, beloved of her people, round which are intertwined her memories, her hopes and fears, her songs of triumph, her victories and her defeats. She has been a symbol of India's age-long culture and civilisation, ever changing, ever flowing, and yet ever the same Ganga. Smiling and dancing in the morning sunlight, and dark and gloomy and full of mystery as the evening shadows fall; a narrow, slow and graceful stream in winter, and a vast roaring thing during the monsoon, broad-bosomed almost as the sea, and with something of the sea’s power to destroy, the Ganga has been to me a symbol and a memory of the past of India, running into the present, and flowing on to the great ocean of the future”.

Mahatma Gandhi, in the Young India Magazine, compared the purity of Ganga to Hinduism. He said, “Hinduism is like the Ganga, pure and unsullied at its source but taking in its course the impurities in the way. Even like the Ganga it is beneficent in its total effect. It takes a provincial form in every province, but the inner substance is retained everywhere”. 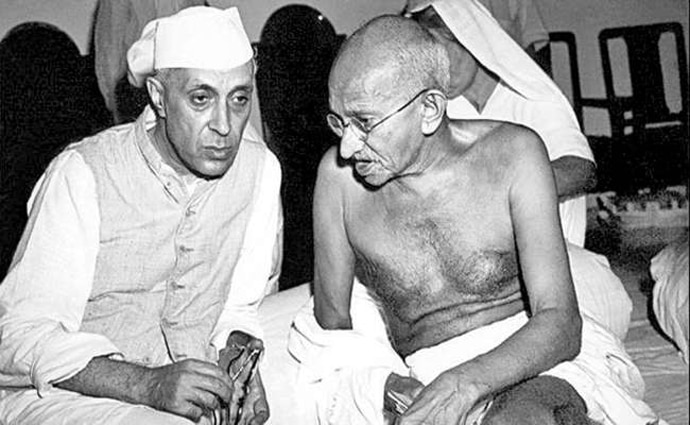 The unique place of the river Ganga in our cultural ethos was captured most beautifully by Jawaharlal Nehru and Gandhiji. (Photo: Facebook)

It was Indira Gandhi who asked the nation a question “Can we not clean Ganga?”, and it was in her prime ministerial capacity that the Centre Board for Pollution Control carried out a survey, giving impetus to her question.

A symbol of prosperity, culture, religion, heritage, civilisation and philosophy, the mighty Ganga is a way of life and livelihood to millions, regardless of their religion. However, as the pace of industrialisation has picked up, these lives that the Ganga has uplifted have blatantly showcased their selfish tendencies and therefore emerged to become the biggest threat to its existence.

Not only industrialisation and commercialisation, this idol of holiness and purity has also become an object for electoral gains. Political parties have trivialised the sacred river and have left it a victim of false promises. All the political parties who have come to power – both at Centre and in the states of Uttar Pradesh and Uttarakhand – have made promises to clean Ganga.

All has been in vain.

The first committed effort to revive and clean Ganga after the survey carried out by former Prime Minister Indira Gandhi was accelerated by her successor in the PM’s office, Rajiv Gandhi, who launched the ambitious Ganga Action Plan in Varanasi on June 14, 1986.

The Plan clearly aimed at the abetment of pollution, improving water quality, the treatment of domestic sewage and industrial waste as a damage control mechanism. In three decades, thousands of crores have been spent on cleaning Ganga by various governments. It's still not clean. (Photo: PTI)

Rajiv Gandhi while launching the Ganga Action Plan, delivered a very emotional speech and said, “The Ganga is a symbol of our prosperity, our culture, our heritage, our civilization, our philosophies… We have to see that Ganga does not remain just a symbol, but becomes a part of our everyday life. But perhaps most of all, it is the holder of our spirituality and our tradition.''

Plans never came to life due to rampant corruption, mismanagement, ignoring the needs and views of locals and technological mistakes. Unfortunately, one of Rajiv Gandhi’s most cherished dreams  – cleaning the holy Ganga — is still an unfinished task 27 years after his death and 32 years of the plan being launched by him.

In the span of three decades, thousands of crores have been spent on cleaning the river by various governments.

However, there is not much to show on the ground. The Ganga remains as polluted as before.

While in 2008, the Ganga was declared the national river, in 2009 the National Ganga River Basin Authority was constituted and in 2011, the government did allocate funds worth Rs 7000 crore, including Rs 1500 crore as a contribution by the state governments of Uttarakhand, Uttar Pradesh, Bihar, Jharkhand and West Bengal.

Further, in 2014, the UPA government formed an inter-ministerial committee to strengthen efforts to make Ganga pollution-free and to ensure its continuous flow. 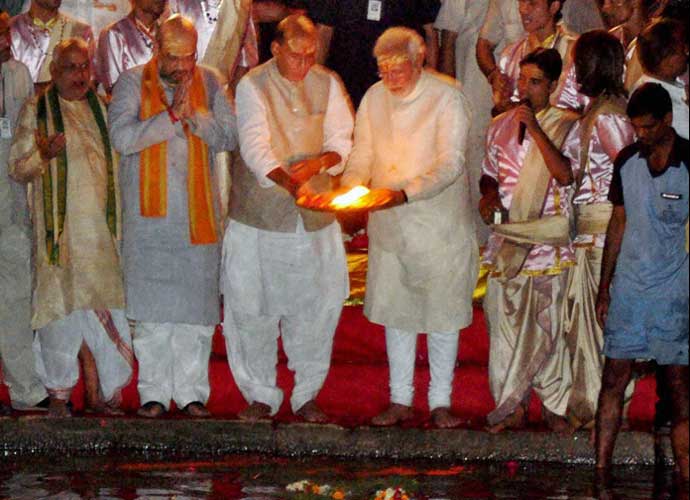 PM Modi had vowed to clean the Ganga by 2019. Will this broken promise come to haunt him?(Photo: PTI)

However, as the 2014 Lok Sabha Polls arrived, the BJP extensively campaigned for the protection of the Ganga. They assured reviving and taking care of the river. Prime Minister Narendra Modi contested from Banaras on the statement that he was "Maa Ganga ka beta" and pledged to keep the Ganga clean. When the new government was formed under Modi, cleaning Ganga was apparently one of the topmost priorities.

A special Ministry of Water resources, River Development and Ganga Rejuvenation was formed under Uma Bharti. However, Modi’s dream of cleaning the holy river does not seem to be materialising in the near future. This is despite the fact that an integrated Ganga Conservation Mission, Namami Gange, was established. Several projects and bodies like the National Mission for Clean Ganga, the implementation wing of the National Ganga Council, were set up in 2016, leading to the dissolution of the National Ganga River Basin Authority.

After charges of failure under Uma Bharti, the role was then transferred to Nitin Gadkari who believes that Namami Gange would succeed — but only in 2020. For the BJP, everything is about electoral gains. The mandate given by the electorate ends in April 2018, but the BJP has already started making noises about the imaginary “New India” in 2022 — and hence, moved all the deadlines of its programmes from 2019 to 2020-2022.

But it remains to be seen how Prime Minister Narendra Modi will face Maa Ganga after breaking his promise of cleaning her up by 2019?

The government admitted in the Rajya Sabha that the river doesn’t meet even bathing quality in Haridwar, districts Kannauj to Allahabad, and Berhampore (Murshidabad district) to Diamond Harbour (South 24 Parganas).

While the Ganga is in desperate need of rejuvenation, the government’s cleaning exercise for the river does not seem to have gathered pace as only 20 per cent of the allotted amount for the National Clean Ganga Mission (NCGM) has been used till March 2018, as per reports.

“Public money wasted in the name of cleaning project and not a single drop of river Ganga has been cleaned so far,” the National Green Tribunal had dryly observed.

The Hindu community had voted for Narendra Modi and the BJP in large numbers and helped them form a majority government as they were made to believe that the 'Hindu Hriday Samraat' Modi is their protector. However, be it Ganga, the cow or Ayodhya, Narendra Modi’s government hasn’t fulfilled a single poll promise. It is time to move beyond mere allocation of money and do serious implementation on the ground. The Supreme Court slammed the government for lacking vision and had remarked, “It seems Ganga will not be cleaned even after 200 years.” Cleaning the Ganga is an opportunity for the Congress to win back the faith of the Hindu community. (Photo: PTI)

Will the Ganga ever be cleaned?

It is a million dollar question. What is needed is grit and determination – something that is missing in all the political parties.

Given its religious importance, any further deterioration would have significant ramifications. “Clean Ganga” was a cause passionately taken up by the late Rajiv Gandhi as a responsibility towards the nation and the Hindu community. Now, his son, the Congress President, Rahul Gandhi should take up this cause and bring to life the unfulfilled dreams of his father.

It is an opportunity for the Congress to win back the faith of the Hindu community which has been angry with the Congress for its minority appeasement agenda. The Ganga needs protectors and saviours like GD Agarwal who fought for the river – and even gave up his life fighting for the cause.

As a tribute to Swami Gyanswarup Sanand, the Congress should continue his fight and make this a “pledged promise with a concrete action plan”. Modi’s tryst with the Ganga has been disappointing – as have all other tall promises made by him.

It’s time Rahul Gandhi and the Congress step in with a solution.

#River, #Environment, #Lok Sabha election 2019, #Narendra Modi
The views and opinions expressed in this article are those of the authors and do not necessarily reflect the official policy or position of DailyO.in or the India Today Group. The writers are solely responsible for any claims arising out of the contents of this article.