His stoic silence on matters which hack at the social fabric of the country has been disappointing.

Let’s not hide behind names, logic or politically crafted justifications. The unending incidents of public lynching in the name of cow demonstrate a pattern. In plain words, it is unlawful use of violence and intimidation, a pretext of anarchy and a subset of terrorism induced for political or religious purposes.

Anarchy is a harsh word; hard to use in a democracy that has well documented "Rule of Land", but this is what describes the pattern the best.

The trend is disturbing — from Mohammad Akhlaq's lynching in Dadri, to Majloom Ansari and Imtiaz Khan's hanging in Jharkhand, the Una flogging in Gujarat, toZaid Ahmed Bhat in Jammu and Kashmir's Udhampur to Pehlu Khan’s lynching, to many other scattered but ideologically-connected incidents. These are not isolated instances, there is a scary pattern to the victims, the culprits and their motives.

If this weren't enough, more disturbing are the political remarks made to justify it. If the remarks of the Rajasthan home minister or of the Union minister for minorities Mukhtar Abbas Naqvi in Parliament with regard to Pehlu Khan’s lynching in Alwar are viewed in this context, we can assume that the pattern gets the systemic and systematic support of the state, which subverts institutional action against the perpetrators. The ideals of Hinduism are threatened more by these vigilante groups than the ones they accuse. Photo: Reuters

The fact that the incidents have not been condemned and the vigilante groups not banned is plain testimony to the political script behind the anarchic reflexes. And the lynch mob counts on it.

The rationale that this has been done in the name of the holy cow and Hindu values sickens me. The ideals of Hinduism are threatened more by these vigilante groups than the ones they accuse. This is not about Hinduism but there is a political coherence in the way the script has been played to evoke anger among the country's majority.

And this is definitely not about cows, or else far more would have been done to save them. They wouldn’t be left to fend for themselves when they are aged; and there would have been high-decibel protests against cruelty in the dairy industry.

Consider the irony. The Indian leather industry is worth Rs 40,000 crore a year and leather finds a worthy mention in Make in India website. The government itself recognises the industry’s potential in exports and domestic market.

There have also been reports of the Centre planning special incentives for the leather industry on lines of textile industry. The Make in India website lists leather under focus sectors and states: "India has an abundance of raw materials with access to 20 per cent of world’s cattle and buffalo and 11 per cent of the world’s goat and sheep population."

And while the gau rakshaks go about on their rampage to save cow and thus Hinduism, they conveniently forget that dairy (which they support and encourage) is the first link in the supply chain.

The dry cows (not milking anymore), calves and the males find their way to the slaughterhouses which provide base material to two other industries — beef trade and leather.

With 20 per cent of the world’s bovine population, India is bound to be world’s largest producer of beef and the low domestic market demand makes us the largest beef exporter.

Noted environmentalist and journalist Sunita Narain, in a recent article, wrote about the prevalence of agro-silvo pastoralism in our country. Livestock is the real insurance system for the small and marginal farmers, who first use them for milk and manure and then sell the unproductive cows to meat and leather industries. Farmers have no alternative other than to sell the unproductive male cattle. Photo: PTI

Maintaining a dry livestock is uneconomical and may cost more than Rs 100 a day. Farmers have no alternative other than to sell the unproductive male cattle.

For millions, the cattle are like their savings account, they pay for their children’s education by selling milk and when it reaches the end of its productive lifecycle, they sell it to make down payments for a productive livestock and continue the cycle.

The three industries are thus interlinked, take that away and the economic security of millions of farmers will be hurt.

Ignorant of this rural economic cycle and the reality that many Hindus eat beef, that those who don’t are fine raising the cow for milk and then sell it to those who eat its meat, the self-appointed cow "protectors" are dishing out justice.

Just two years ago, political pundits had started talking about how politics has moved from religious bipartisanship to development.

Cut to 2017, and we are stuck with cow protection issues, development has been forgotten and policy making is out. Pick any newspaper, any digital portal, or even your social media channel, what we are talking about these days is moral policing in the name of harassment, anarchy in the name of the harmless cow, conversions and communal bashing. 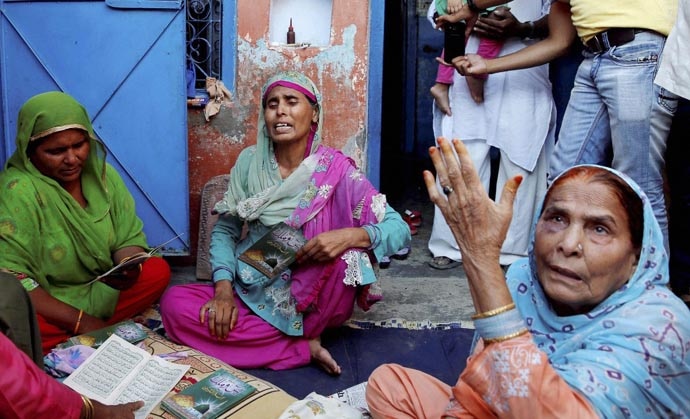 If Dadri was a dire warning, the repeated incidents of lynching are a template of a politically-cannibalistic agenda. Photo: PTI

Where does India stand? Probably in dilemma. And what are we giving to the world as global leaders, a spinoff of fundamentalism and a sellable political script to mainstream hatred and intolerance?

We have known for ages what’s sacred for one person is sustenance for the other.

And there comes politics, which has worn such a mask of hypocrisy that the same party which clamours for beef ban in the cow belt promises to build quality slaughterhouses in Kerala and Northeast.

Where does the buck stop?

Former American President Harry S Truman had this phrase painted on a small wooden board and kept on his desk in the Oval Office. There is a veritable chorus of voices whose aim is to prove that the buck doesn’t stop with Modi.

But even if the buck doesn’t stop with him, what should we make of his and his cabinet colleagues’ enigmatic silence on the matter. But Modi himself has been a part of this chorus, drumming up religious sentiments by raising the bogey of cow slaughter in his race to the 2014 elections.

Rallies after rallies in the politically important state of UP, Modi raised the theme of "pink revolution" and built a massive election campaign with the ominous theme of "cow slaughter" at its centre.

In the run-up to the 2014 elections, Modi got immense support from the liberal Hindus who voted him for his "New India" vision, the catchphrase "Achhe din" captured the masses; his stoic silence on matters which hack at the social fabric of the country and his inability to rein in the rhetoric and bigotry, has been disappointing.

The onus is on him now: if Dadri was a dire warning, the repeated incidents of lynching are a template of a politically-cannibalistic agenda.

And as the government completes three years, I suppose it has a lot to ponder over.

#Cow Vigilantism, #Modi government, #Gau Rakshaks
The views and opinions expressed in this article are those of the authors and do not necessarily reflect the official policy or position of DailyO.in or the India Today Group. The writers are solely responsible for any claims arising out of the contents of this article.