The Uttar Pradesh CM did not even bother to visit the grief-stricken parents.

On Saturday evening, 24 hours after the death of as many as 60 innocent children in Gorakhpur Medical College was brought to light by the media, the Yogi Adityanath government in Uttar Pradesh continued to look for an alibi for what was clearly a result of official apathy, neglect and corruption.

The government machinery defiantly remained in denial mode and went about claiming that the death of the children was “wrongly” being attributed to lack of availability of the life-saving liquid oxygen in the medical college.

According to hospital records, 60 children had died over the past five days in the paediatrics and Japanese encephalitis wards. Of these, at least 36 deaths were believed to have occurred due to stoppage of oxygen supply.

Saffron-clad CM Adityanath, who hails from Gorakhpur, however, chose not to visit the aggrieved families in the town, which is associated with the Gorakhnath temple headed by him. Instead, he was busy holding a pre-scheduled meeting on the Swachh Bharat Mission in Allahabad.

The only demonstrative action came in the form of suspension of the medical college principal, Dr Rajiv Misra, who has been held responsible for holding back the payment for oxygen cylinders. Health minister Siddhartha Nath Singh and medical education minister Ashutosh Tandon air-dashed to Gorakhpur to personally take stock of the situation on Saturday.

Speaking to mediapersons, Singh insisted that “the oxygen supply was interrupted only for a brief while for about 90 minutes, during which period no death occurred.”

What he failed to explain was why the government had ordered suspension of the principal if oxygen supply was not disrupted on account of persistent delay in release of payment. The minister also failed to explain why the oxygen supplier was being hauled up if lack of oxygen was not the reason for the deaths.

What was worse was that the health minister sought to play down the incident by saying that “even past records show that on an average, 20 child deaths were reported every day during this period over the past three years; it seems the media is blowing it (the issue) out of proportion”. 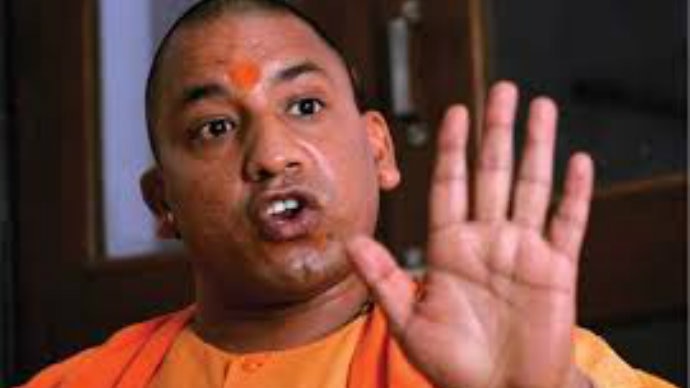 In the aftermath of the tragedy, Yogi Adityanath was busy holding a meeting on the Swachh Bharat Mission in Allahabad. Photo: PTI

Surprisingly, both ministers visiting Gorakhpur did not bother to visit the families of the victims. Whatever feedback they gathered was from those very officials who are apparently responsible for the neglect and apathy that led to the avoidable deaths of the poor children.

Meanwhile, the government has decided to book the supplier for holding back supply of the life-saving oxygen. With the local police having launched a manhunt for him, he was not available for comment.

But his lawyer sought to point out, “my client, Pushpa Sales, which is the key supplier of oxygen cylinders to the Gorakhpur Medical College, is being unnecessarily hounded when the fact of the matter is that the medical college has been sitting over my client’s pending bills worth Rs 63 lakh for the past several months.”

He said: “My client had no choice but to suspend the supply because the parent supplier had stopped supplying cylinders to my client who was not in a position to clear their dues without receiving this huge payment from the medical college.”

Evidently, in an obvious bid to absolve itself of responsibility, the Yogi government is out to pass the buck to the oxygen supplier and the college principal.

Notwithstanding their apathy, the fact also remains that delay in payment of bills is a routine practice in most government departments, where kickbacks and commissions are the order of the day.

Informed sources in the medical college allege that payments are held back as a matter of routine until kickbacks are paid to all officials concerned.

On his return from Allahabad, Adityanath convened a high-level meeting on Saturday evening. However, his task is to find an alibi that can take his government off the hook - which is indeed no mean task.

The bureaucratic exercise was focused towards finding some scapegoats. A high-level inquiry is likely to be ordered by late Saturday.

Also read: What does Gorakhpur children’s murder say about our conscience?

#Japanese encephalitis, #Yogi Adityanath, #Gorakhpur
The views and opinions expressed in this article are those of the authors and do not necessarily reflect the official policy or position of DailyO.in or the India Today Group. The writers are solely responsible for any claims arising out of the contents of this article.