With barely a few months left for the do-or-die battle over the 2019 Lok Sabha, both the BJP and RSS won't leave anything to chance.

The electoral drubbing that the BJP got in the recent Assembly polls in the Hindi heartland seems to be taking its toll. The party on December 26 declared a list of 17 new state in-charges for the upcoming Lok Sabha polls.

Prominent among the new appointees was Gordhan Zadhapia — former home minister of Gujarat, once a vocal critic of the then-Gujarat CM Narendra Modi, now made poll in-charge of Uttar Pradesh.

Zadaphia was the home minister of Gujarat during the 2002 post-Godhra riots and was replaced by Amit Shah soon after. According to sources, he was miffed with Modi for not giving him the home portfolio and left the BJP to float his own outfit, the Mahagujarat Janata Party, during the 2007 Assembly elections.

Later, he merged his outfit with the Gujarat Parivartan Party, formed by another Modi critic, former Gujarat CM Keshubhai Patel. Zadaphia was the home minister of Gujarat during the 2002 post-Godhra riots. (Photo: Screengrab)

A protégé of former VHP president Pravin Togadia, someone who had no love lost for Modi, Zardaphia's appointment assumes significance, given the political importance of Uttar Pradesh for the BJP.

The 2018 assembly by-poll defeat has woken the BJP up from its 'Modi lehar' stupor.

The party realised that just banking on PM Modi's image and charm offensive wasn't working, and the coming together of the regional parties — the SP, BSP, and RLD — along with the Congress was seriously denting its carefully crafted Hindu votebank.

The 2013-14 bogey of corruption and 'ma-bete ki sarkar' pleas fell on deaf ears and were successfully countered with 'suit boot ki sarkar' by the principal opposition Congress during the 2018 by-polls to the Gorakhpur and Phulpur seats, earlier held by BJP's UP CM Yogi Adityanath and Deputy CM Keshav Prasad Maurya. The loss in the crucial states of Madhya Pradesh, Rajasthan and Chhattisgarh has further dented the seeming invincibility of the Modi-Shah juggernaut.

The BJP's fair weather allies have already realised a change in the political atmosphere, with parties like Apna Dal and Om Prakash Rajbhar's Suheldev Bharatiya Samaj Party (SBSP) flexing their muscles for a greater number of seats in the upcoming polls. 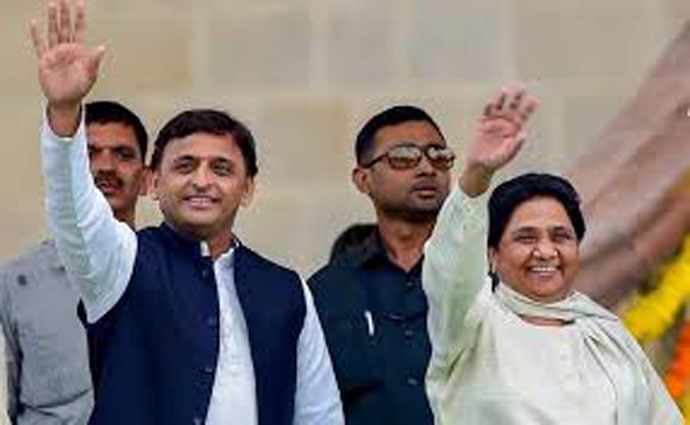 The coming together of regional forces in Uttar Pradesh is giving the BJP sleepless nights. (Photo: PTI/file)

The party is also facing a lot of heat from the farming community, with the Opposition constantly cornering it on issues of agrarian distress, farm loan waiver and farmer suicides.

The recent results in the Assembly polls are also being read in that light.

Hindutva on the agenda

From 'sabka saath, sabka vikaas' to 'mandir wahin banayenge', the BJP seems to be falling on the tried-and-tested formula of Hindutva to counter anti-incumbency in the 2019 polls.

The choice of Yogi Adityanath as the CM of Uttar Pradesh was seen by many as a back-up plan to keep the right-wing vote bank together.

The appointment of Zadaphia, one of the accused in the 2002 post-Godhra riots, who was questioned thrice by the SIT, would also play well to the right-wing gallery. He was accused of not doing enough to control the three-day violence that took the lives of more than 1,000 Muslims.

Sensing a break-up of its consolidated 2014 right-wing vote bank in the face of the coming together of regional caste-based parties, the BJP would hope Zadaphia would wean back its voters.

RSS back in the driver's seat

An old VHP man, Zadaphia had joined the BJP at the behest of the RSS. The appointment of the one-time Modi critic, by a BJP led by Modi-Amit Shah, is being seen by many as in fact the Sangh taking back the reins.

After the 2014 win, PM Modi and Amit Shah have had a relatively free run, with several senior leaders (read 'Modi critics') either being side-lined or moved to the margdarshak mandal. 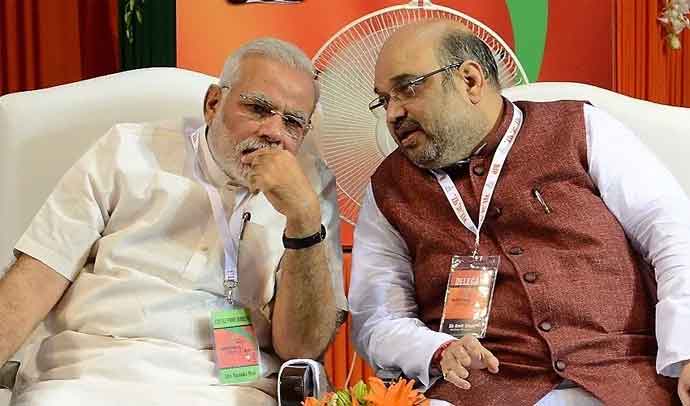 Realising the virtues of working with old foes. (Photo: PTI)

Zadaphia, on the other hand, was reportedly the first one to make the 'scorpion sitting on a Shivling' remark when asked about Modi's relationship with the RSS, much before Congress' Shashi Tharoor was lambasted for saying the same.

Yes in addition to the unnamed RSS source, here is evidence of exBJP HomeMinister Zadaphia using the same scorpion analogy: https://t.co/fAnZH7MBybNow will @rsprasad apologise to me & @RahulGandhi since the alleged insult I quoted comes from his own camp? https://t.co/eLBgcXUwKP

His appointment to the post previously held by BJP's 'Chanakya' Amit Shah is also being seen as RSS' damage-control exercise. A prominent role for him could also signal the Sangh somewhat losing faith in Shah's electoral strategy.

Zadaphia has further advantages. He would also be able to bridge the gap between the workers of the Sangh and the BJP in the state, further increasing the party's poll prospects.

Belonging to the Patel community, Zadaphia is considered one of Hardik Patel's mentors — keeping him occupied in Uttar Pradesh will also help the party in Gujarat. Zadaphia is a Saurashtra Patel from the Leuva sub-section and the community can influence the outcome in 50 of Gujarat's 182 seats — something the BJP realised in the last Assembly polls in Gujarat, where it won by a whisker in the face of the Patedar Aandolan. Zadaphia is considered one of Hardik Patel's mentors, and keeping him occupied in Uttar Pradesh can help the party in Gujarat. (Photo: PTI/file)

Although two more leaders — Dushyant Gautam and Narottam Mishra — will be working along with Zadaphia in Uttar Pradesh, he is bound to play a major role in the party's strategy.

With big-ticket reforms like demonetisation and GST having backfired, the BJP needs all the weapons in its arsenal to counter not only anti-incumbency, but an increasingly confident Congress president Rahul Gandhi.

With barely a few months left for the do-or-die battle for the 2019 Lok Sabha, both the BJP and the RSS will not leave anything to chance.

Seems like the party is at last getting its act together, with even old-time foes realising the virtues of working together.

Post your comment
#RSS, #2019 Lok Sabha elections, #Narendra Modi, #Gordhan zadhaphia
The views and opinions expressed in this article are those of the authors and do not necessarily reflect the official policy or position of DailyO.in or the India Today Group. The writers are solely responsible for any claims arising out of the contents of this article.