GST which has come after a wait of 16 years replaces central taxes such as service tax and excise duties.

India has rung in the Goods and Services Tax (GST) on the midnight of June 30 to replace a multitude of taxes, including central taxes such as service tax and excise duties, and state taxes, such as octroi, entry tax, VAT and so on.

While the substitution of the existing tax structure with GST came after 16 years of deliberations and is largely seen as a unifying tax for the country, the initial confusion among traders is a pointer to potential challenges in coming days. Here are some:

1.) There is still frenzy among many shopkeepers to sell old stocks at pre-GST rates, even as they await manufacturers to issue new MRP on packaged products. The old MRP includes VAT, and they cannot sell that stock by adding the new GST rates, which would increase prices substantially.

2.) Drug sales have been affected in parts of the country after pharma companies slowed down on medicine production in order to exhaust the old stocks. This was exacerbated by technical glitches as software vendors had not updated their systems from VAT to GST, which left 30 per cent of chemists’ shops shut in Mumbai. Earlier, drugs used to be classified under 6 per cent and 13.5 per cent tax rates, while there are four tax slabs now.

3.) Many shopkeepers are still giving out manual bills, and some with approximate final rates, causing a major confusion among consumers. There are some shopkeepers who complain they have not procured a GST Number – a 15 digit code without which one cannot carry out his business under the new tax regime, despite having tried for several days to get one. There are many reported cases where customers have been given the wrong bills, after shopkeepers erred on the calculation of the new tax. 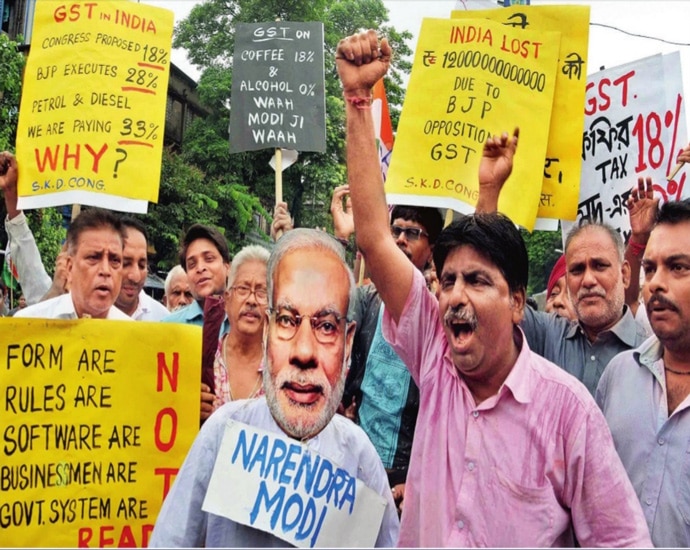 4.) Businesses have been largely apprehensive about the shift, more so since it has been coming after demonetisation, one of the biggest financial disruptions the country has seen. Take the case of the automotive industry.

Diesel SUV makers like Mahindra & Mahindra, early last year, went through a tumultuous period after they were pulled up by the Supreme Court which imposed stiff restrictions on sales of large diesel vehicles in the National Capital Region.

Demonetisation hit them further, as the sudden withdrawal of Rs 15.4 lakh crore from the system slowed vehicle sales as cash-strapped customers postponed their buying decisions. Hybrid car makers have been hit by the GST rate in addition to the cess which takes the total taxes to 43 per cent.

5.) Multiplex owners are still flummoxed by the entertainment taxes that states collect as cess on multiplexes, theatres and amusement parks. The GST rate for movie tickets below Rs 100 has been pegged at 18 per cent (pruned after a representation by the industry, from 28 per cent), while above Rs 100, the rate continues to be 28 per cent.

But states have been imposing taxes that have worried theatre owners. In Tamil Nadu, for instance, the government has imposed a 30 per cent municipal tax on tickets, in addition to the GST. As much as 58 per cent tax on a ticket above Rs 100 is too exorbitant. It’s not surprising, then that nearly 1,100 cinemas in that state are planning to go on strike from July 3 as a manner of protest.

6.) The procedures of filing returns are bound to be cumbersome, with businesses expected to file at least 37 returns in a year. This will be multiplied several times depending on the number of states in which one is transacting a business. Clearly, this cannot be deemed "simple" in any sense of the term.

7.) Last but not the least, the four different tax slabs are still a far cry from the international norm of a single tax or two. Given India’s federal structure, it is true that the final GST rates are the result of the pulls and pressures from various lobbies and the state governments. But can these be still optimised to arrive at a more uniform tax level?

Also, can India move on to still lower tax slabs over a period of time? Can we also have a unified tax authority over the long run, instead of the present diarchy of the states and the centre? The answers to these will be eagerly awaited.

Post your comment
#BJP, #Arun Jaitley, #Narendra Modi, #Tax
The views and opinions expressed in this article are those of the authors and do not necessarily reflect the official policy or position of DailyO.in or the India Today Group. The writers are solely responsible for any claims arising out of the contents of this article.