Devout gangsterism that devises its own means of justice argues for the violent cult of the cow.

Dharmendra Yadav of the Gurgaon Gau Raksha Dal must be a proud man.

He and his team on June 28 intercepted - "after a 7km chase" - two transporters of beef, Mukhtiar and Rizwan, apparently on their way from Mewat to Delhi, and made them eat panchgavya, which is another name for cow dung and urine, to purify them.

Also read - So what if it was 'beef'? Nothing will ever justify Dadri lynching

One report says the two unfortunates were transporting 700kg. Another says 300kg. As ever, the police have not committed themselves to a specific quantity. Nor is there any clear idea whether the meat was beef or mutton.

Or, for all you know, black buck. The particulars hardly matter, do they? 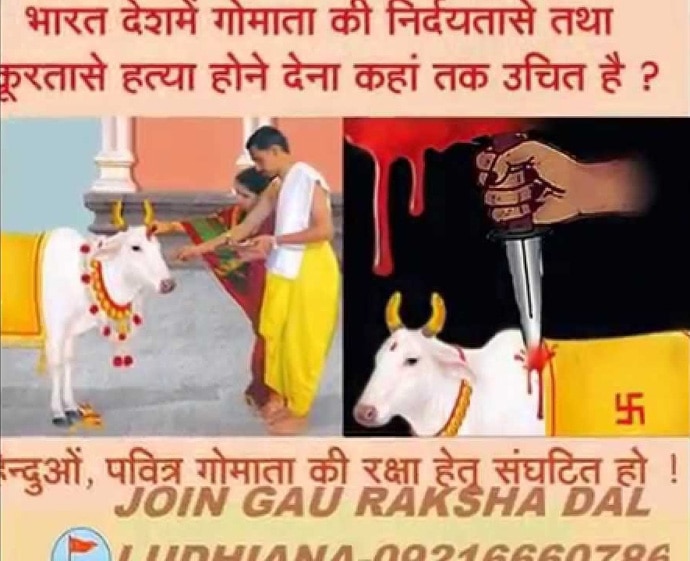 In Haryana, ruled by the RSS cadet, Manohar Lal Khattar, dealing with beef invites punishment up to ten years in prison or/and Rs 100,000 in fine.

Rizwan and Mukhtiar, the two young men, were, for purposes of purification and punishment, made to consume cow dung and drink cow urine. Since these acts were committed in full public view, it doesn't stand to reason that the police was not aware of what's happening.

They were not in evidence though.

Last year, a bunch of right-wing Hindus had beaten and ended up killing Mohammad Akhlaq of Dadri in Uttar Pradesh for possession of beef. There are conflicting lab reports on whether the meat was beef or mutton.

Shorty afterwards, two young boys were lynched and hanged in Chhattisgarh for taking cattle to the market.

The point is not the nature and the quality of meat. The point is there seems to be no evidence of the law where the law is broken.

If beef consumption in Haryana is illegal, Mukhtiar and Rizwan should be produced before a court, not administered kangaroo justice.

That in these matters legal processing is largely a matter of devout gangsterism that devises its own means of justice argues for the violent "Cult of the Cow" gaining ground.

Also read - Latehar tragedy: Cows have a religion in India and it's deadly

Some of the Hindu fundamentalists tend to brand the gau raksha-like gangs as "Desh Badal Raha Hai" movements. A country that is transiting into making allegedly guilty people consume dung, will not much mind if they are made to consume human waste.

We are lapsing into primitivism. Religious recidivism is its own god.

It's altogether another question that if it indeed was beef that was intercepted by the gau rakshaks, 700kg of meat is a rather large quantity. Clearly, in Delhi, there is a demand for beef.

On the face of it, it may not make much sense to connect beef eating - and this writer is not a beef eater - with FDI.

Only last week, the finance minister, Arun Jaitley, opened up the economy for partnerships. The idea of FDI is not just related to capital. It actually underlines openness to ideas and fair practises as well. India's gau rakshaks, and related tribes, excel in the practise of outlandish preference for the cow to humans, and source great pride and sense of kinship from these.

They would soon succeed in turning a modern city like Gurgaon into a gaushala.

As it is, the cows have taken over the city's roads.

The incident on June 27 might be an exception. But episodes like these are increasing. In Kerala, beef consumption is accepted as a dining staple.

Men like Dharmendra Yadav and his mentor and CM, Khattar, will find it hard to generate enough bullshit to punish the beef consumers.

In the final count, it's not really a question of quoting that in the much-fantasised golden Gupta period, cow slaughter was the same as killing a Brahmin.

It's really about finding a humane equation between animals and humans, Brahmins and Muslims included.

The rest is bullshit.

But the gau rakshaks and the RSS campaigners of Cow Cola are not likely to be equipped to tell the difference between rakshak and raakshas.

India's great bovine comedy is on a stampede.

Tough luck, my Muslim friends. Stay wise, and keep away from the bulls.

#Dadri Lynching, #Hindutva, #Beef, #Gau Raksha Dal
The views and opinions expressed in this article are those of the authors and do not necessarily reflect the official policy or position of DailyO.in or the India Today Group. The writers are solely responsible for any claims arising out of the contents of this article.