Trolling of Gurmehar Kaur was wrong. Randeep Hooda, Sehwag should be ashamed

She has exposed the right-wing nationalism as a hypocritical, sexist, bigoted project.

“I am a student of Delhi University. I am not afraid of ABVP. I am not alone. Every student of India is with me. Pakistan did not kill my dad, war killed him. Because if there was no war, my dad would still be here. I fight for peace between India and Pakistan. Enough is enough.”

These were the words from Gurmehar Kaur, a young DU student and daughter of a Kargil War martyr, which provoked the ire of India’s swarming keyboard nationalists. They trolled her, belittled her, dismissed her as a "pawn" and a "prop", questioned her patriotism, and threatened her with rape.

Former iconic cricketer Virender Sehwag, heartily endorsed by actor Randeep Hooda, joined the trolls in mocking her and trivialising her stand by tweeting: “I didn’t score two triple hundreds, my bat did.”

While these "heroes" disgraced themselves by their shameful attacks, Gurmehar stood her ground and in her thoughtful, dignified and courageous way gave expression to, and embodied, the values that undergird our democracy - dissent and tolerance.

The vicious, orchestrated campaign of vilification and threats towards this martyr’s daughter gave the lie to the right-wing nationalists' seemingly unqualified, loudly professed love for the soldier .It was never about love for the soldier or his family, for them it was always about hatred of the other. Soldiers are pawns for their virulent politics, just as their martyrdom is a ruse for ramping up jingoism, policing thought, and quelling dissent.

Gurmehar has done a service to the nation, by exposing right-wing nationalism as a spurious, hypocritical, sexist, bigoted project whose aim is to instil conformity and obedience among the people towards the powerful.

The greatest threat to authoritarians everywhere is independent thought and reason, the fountainhead of all resistance and dissent, which they seek to repress through naked power, as they did in JNU, Jodhpur and now Ramjas College.

This naked exercise of power needs a legitimising ideal in a democracy, which is either provided by religion or nationalism, and the genius of the Sangh Parivar is to combine both these elements in a heady, toxic broth.

Hate is fungible. The harvest of carefully cultivated hate against the enemy nation is all too often wrought on domestic dissidents, precisely why Gurmehar warns against "state-sponsored hatred". The long brewing nationalist hatred does not stop at the border, it seeps inwards to find new targets, new objects of vilification, unloading on fifth columns of dissenters, minorities, feminists, tribals, and anyone suspicious of the nationalist project defined by them.

It’s not surprising then that this hatred, cultivated and legitimised in the name of the soldier, was reflected back, in all its viciousness, on to a martyred soldier’s daughter, just for holding a different opinion.

The attacks on Gurmehar also exposed the deep rooted patriarchy embedded in their nationalism when they employed words like "used", "pawn" or "prop" to patronise a young girl expressing her opinion, denying her all agency and independence of thought.

She was showered with rape threats, insinuations were made about her personal life (probably romancing a leftist, quipped Sangh sympathising "feminist" Madhu Kishwar), all the varied instruments of misogyny unleashed on her, of course, in the defence of Bharat Mata.

She stood miles above the crowd that patronised her, mocked her, abused her, afraid of the mirror she held up against them that reflected the hollowness of their bogus nationalism. Her individuality of thought contrasted with the collective hysteria of the baying Twitter mob, the quiet dignity of her posters rang louder, and shone brighter, than their shrill abuse. 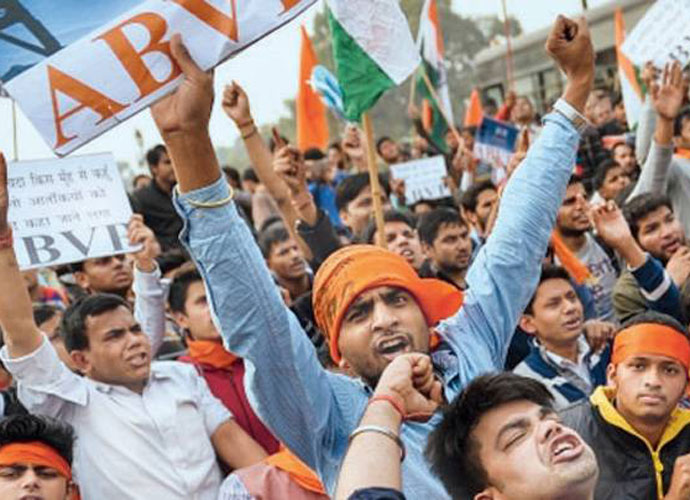 The greatest threat to authoritarians everywhere is independent thought and reason, the fountainhead of all resistance and dissent, which they seek to repress through naked power, as they did in JNU, Jodhpur and now Ramjas College. (Photo: India Today)

In normal times, in a democracy, expressing solidarity against students getting beaten up for dissenting views would be an unexceptionable act. It becomes subversive, and courageous, in an atmosphere where naked bigotry and intolerance, wrapped in nationalistic fervour, and backed by state support, menacingly swarms all spaces - digital and physical.

It is even more courageous for a martyr’s daughter to open up on a public platform about coming to terms with her deeply personal loss, and share the insights she gained about tolerance and peace from her experience.

This, especially in such frenzied times, when all empathy is drained by partisanship, and where the tag of anti-national is immediately branded with righteous fury for deviating from the established discourse on nationalism.

In exhibiting this courage, in facing down a barrage of attacks by anonymous, cowardly trolls and in taking head on the mocking cynicism of morally vacuous stars, Gurmehar emerged as a hero.

India is not just a physical span of land but a set of ideals, with freedom and tolerance at its centre, and in defending these ideals, she defended India, in the footsteps of her father.

Also read: This Kargil martyr's daughter has a message for Indian Muslim-haters

Post your comment
#Patriotism, #ABVP, #Ramjas college, #Gurmehar Kaur
The views and opinions expressed in this article are those of the authors and do not necessarily reflect the official policy or position of DailyO.in or the India Today Group. The writers are solely responsible for any claims arising out of the contents of this article.