It's mind-boggling that the likes of Sehwag, Hooda, Rijiju and Kishwar prefer ABVP's rape threats over her liberalism.

Once again, just a bit more than a year since the months-long JNU fiasco, we are back to where it all started. In the wake of the racuous display of goondaism by ABVP members in Ramjas College and other places in Delhi University, a 20-year-old DU student, Gurmehar Kaur, who also happens to be the daughter of a Kargil martyr, has been threatened with rape.

Because she said that it "war, not Pakistan, that killed her father", Gurmehar has been trolled online with the most rabid abuses, and ABVP issued rape threats to caution of of her "antinationalism".

What exactly is "anti-national"? What is "seditious"? And who gets to beat someone up in the name of patriotism? And who gets to use rape as an instrument of power, a very gendered one at that, to silence women critics and dissenters, to trample the voices of the female peacenik even if she's the daughter of a decorated and departed war hero?

To clarify, dissent doesn’t make you an anti-national. Neither does criticising the country. By law, it is only seditious when you conspire against your country’s interests, and the law too is an archaic one that ideally needs to be done away with. However, under no circumstances is one allowed to assault someone just because they don’t like your opinion.

The trolling of Gurmehar Kaur wasn't just vicious - it was the exact replica of the abusive trolling, with virtual violence that often spills over into offline life, that women journalists, public intellectuals, civil rights activists and liberals have received since voicing concerns over the "intolerance" issue. That it's becoming ever more frequent and ever more toxic, particularly after getting covert and overt support from the top, is really what is new in this case.

Now that we have that cleared, let us take a look at the most supreme form of hypocrisy the conservatives in India have to offer.

Ladies and gentlemen, we present you the “soldier ho gaya” argument.

On one side we had the “greats” who have, in the past, defended anything and everything with the rhetoric “what about the soldiers at the border?” Be it demonetisation, or just anyone complaining about electricity or WiFi, we are all to be thankful of our own existence because the Army is out there protecting our precious buttocks.

On the other hand, we are sheeple who get conned by fake soldiers, whose government attacks soldiers for making complaints about food on social media, and we are, most of all, people who simply cannot digest the fact that a young woman who lost her father to senseless war, stands up and speaks for peace!

How dare she? Only we, the nation-lovers can turn soldiers into straw-men to fit our agendas and narratives. What gives Gurmehar Kaur, a young DU student and daughter of a Kargil War martyr, the right to bring use her personal loss as an example to illustrate the problems of nationalistic violence? Nope. The only way to set this right is to send her rape threats. 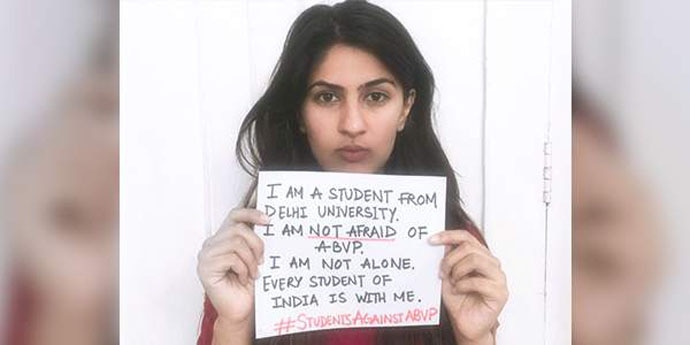 Gurmehar Kaur spoke up for peace and got rape threats in return. Is this how 'nationalism' works? [Photo: Facebook]

The world has gone mad. The nationalists have turned into the opposite of rationalists. Any criticism on their behaviour, even when it is as atrocious as physical violence and rape/death threats, is perceived as the liberals acting out. They are so blinded by their false brainwashed jihadi-like beliefs that they fail to see their utter lack of rationality and their clearer-than-water hypocrisy.

Indians, who trended #ShutDownJNU because some students had allegedly raised slogans about the Azadi of Kashmir, have now taken a Milo Yiannopolous approach to complaining about how liberals just don’t understand freedom of expression. That is of course after the ABVP decided to attack protestors and faculty at Ramjas College who opposed the cancellation of talks by Umar Khalid and Shehla Rashid. How twisted is ABVP's understanding of what constitutes freedom of expression?

But ghastly as it may sound, what does one do when "celebrities" and youth icons - such as Randeep Hooda and Virender Sehwag - take to social media and openly mock a young woman who has opted to be a peace activist and not give in to warmongering despite losing her father to India-Pakistan Kargil War? Doesn't she destroy the false binary that is the soldiers versus antinational students debate?

And to think that actors like Hooda, sportsmen like Sehwas, ministers like Rijiju, rightwing commentators like Madhu Kishwar and the general pro-BJP troll universe that descends upon her like a swarm of stinging bees and try intimidate her? Of course, the ABVP sympathisers top it all with rape threats, outright violence, physical assault and much more.

Not to mention the fanning of these flames of suppression by none other than BJP ministers and leaders, particularly Kiren Rijiju, MoS home, who have done their bit to call the students mindless and anti-national and everything they can think of. Thankfully there still exist people who can easily spot hypocrisy for what it is.

left: *literally anything*right: SOLDIERS ARE DYINGleft: my dad's a soldierright: KEEP HIS NAME OUT OF YOUR WHORE MOUTH

I'm SHOCKED that someone who lost their father in a war speaks for peace. It's an insult to my idea of their sacrifice for nation.

You really thought a govt tht brutally goes after a soldier for asking decent food really respects a soldier's daughter. Be reasonable yaar.

Here is the complete text of what @mehartweets said in that video. Shown in red is the part-sentence that was taken out to troll her. pic.twitter.com/Tj0KSex67o

Oscars done. Back to cheery India where ministers, celebs, & sportstars are hounding a girl by taking out of context her message for peace.

Not surprising that "nationalists" mock @mehartweets for one pic out of an entire series. Their vision as always is limited by their hate. pic.twitter.com/SCzRL76Jf7

When you say "Where's our FoE", know that no one is stopping you from tweeting nonsense. We're just countering. There lies the difference.

So when a girl speaks she is being "used"? How patronising (&sexist)to assume @mehartweets doesn't have a mind of her own. But that you do? https://t.co/1NggrZOhz4

"It is Sehwag's FOE to joke about-"But it is my FOE to criticize-"NO U R INFRINGING ON FOE"No, I'm not I'm ju-"YOU MORAL POLICE"

It's not a naara for aazaadi from even evils like jaativaad. Just a message of peace, taken out of context, that has the ministers run amok.

But sadly, the number of people who understand and respect the values of having a diversity of opinion, reasoning and essential dissent against a rather conservative government and its tentacles, are way outnumbered by those who see this as an attempt to discredit their dear supreme leader. Their views are as important as Gurmehar’s, or anyone else’s, of course, and those views deserve the same space. For it is respecting contrarian opinion, is what democracy is made of.

However, to expect diversity of opinion from those who want to impose the RSS'version of Virat Hindu worldview is obviously misguided. Yet, when icons, who have wowed us with their talent in a particular arna, such as sports or acting, amplify the governmental bigotry, something comes crashing down. Not only the celebrities making irresponsible comments on social media embolden the lumpens who then feel vindicated, there's consequence of amplifying the bigotry many times by giving it the nationalistic cover and succor.

For example, when Sehwag equates Gurmehar's nuanced comment about war and its ruthlessness with something as inane as his bat and the centuries he hit, he robs the matter of the important point of agency and free will. Similarly, comparing Gurmehar to Dawood Ibrahim because the latter was a police officer's son is equally ridiculous and flatly an asinine assault on the important message that the 20-year-old has been campaigning for.

Please respect my stupid views while I play partisan politics and brand all of you evils.

Those abusing @virendersehwag for criticizing this will go bonkers if a Babri demolisher writes, 'I didn't demolish Babri, my tools did' pic.twitter.com/cJACX4vZqi

Everyone has right of views but she said Pakistan didn't kill our brave martyr & India should shun war. India never perpetrated violence! https://t.co/2b8SHLdPRg

Freedom of expression is not a licence to shout anti-national slogans in campuses. Criticise the govt but don't abuse the motherland. https://t.co/3iqyqeLdJe

Many concerned about Mehar getting threatened. Instead of using her for their own propaganda, why don't they assist her in filing an FIR?

Quite heartening to see some famous people taking an unabashed stand on national issues. Evident that silence is no longer an option

This woman is now using a soldiers martyrdom to further her agenda via his daughter. Sick https://t.co/KChLQW9TSx

If a martyr's daughter's word is gospel, then Umaṛ Khalid, whose father, is former chief of the banned SIMI, must be treated similarly..

Dear @mehartweets Sorry to say this but I am with your father's ideology and not your's. Here is my message to India! pic.twitter.com/VlGXZeOVrF

When media fails to discover real stories, it invents stories on a 'placard'.

It is obvious that in the war between the liberals and the bigots, the biggest casaulty is human decency and compassion. Those who label Gurmehar Kaur as antinational, seditious and a poisoned mind need to reflect how a 20-year-old woman student has challenged the might of a deeply insecure regime that simply wants to exploit and fan fears, not allay them.