Is this the future of our traditional arts at the hands of the government that appears to have interest in promoting traditions?

It is no secret that mills have long hated the Handloom (Reservation of Articles for Production) Act of 1985. The act basically lists traditional textile items as reserved to be produced on handlooms alone (handlooms are defined as anything not a power loom). It appears that now the mills will succeed in getting rid of this Act, unless citizens intervene. The mandatory pro-lobby opinion forming article in MSM has quietly appeared, but there is little noise over it. Notice how it is a piece that argues against the Act out of the blue - absolutely nothing in the news to provoke a reassessment of the Act. Usually an indicator that there is something in the background that is coming up that the piece is preparing the readers for (or rather, setting up opinion).

The argument basically says that since the power looms are already violating the Handloom Reservation Act, it should be scrapped. It is an interesting argument that can probably be applied to the entire IPC.

Quote from an email appeal for help by Marchalla Mohan Rao, president of the Handloom Weavers' Association of undivided Andhra Pradesh:

"The government of India is going to remove Handloom Reservation Act, which is giving some extent protection to the handloom sector till now. Textile Department already constitute a committee on this issue to analysis the implementation of reservation act and possibilities of removable items of varieties of handlooms or to totally remove this act by putting in the Parliament for amendment. Committee meeting held on March 20, 2015 in this regard in development commissioner (Handlooms) [DCH] Office Delhi, nobody telling about this issue, what is going on reservation act, they are maintaining the secrecy in the department.

In this context, we are all seeking for your suggestions, how we can overcome from this problem to protect the handlooms in India. In which way we can brought this issue before the government as well as civil society for their involvement for handloom weavers movement. So, please send your opinions and suggestions to overcome from this problem and to protect the lakhs of handloom weavers livelihood."

You can read more about the realities of weavers in Andhra.

"We had a two-day deliberation in Delhi in the month of March regarding the importance of the Reservation Act in securing the interests of the handloom sector. I spoke to the enforcement chief personally and to the two deputy directors. They agreed to come but failed to show up. The secretary was given a direct invitation by one of the members of the Federation of Handloom organisations. Same was the case with the DCH. But there was no representation from the handloom department. And within a couple of weeks we hear from the enforcement officials (unofficially) that a move is on to repeal the Act. There seems to be a strong power loom lobby behind the move and the secretary textiles seems to be playing an active role in the whole thing." 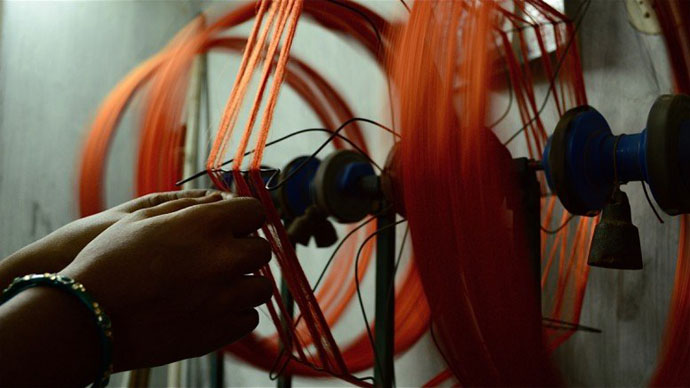 Livelihoods of weavers are already an issue. Third National Census of Handloom Units and Allied Activity Workers (2010) for DCH, ministry of textiles by the National Council of Applied Economic Research (India's oldest and independent think tank) tells us something about who these weavers are:

We are talking of some of the most vulnerable rural populations here. People who have no alternative employment. Three-fourth of them being women means that their loss of occupation and income is going to have a direct adverse influence on their children as well - a large part of income of women goes directly to the well being of their children. Lack of schooling means that the potential for already scarce jobs gets even lower. The one skill they do have will be rendered obsolete by mechanical alternatives that produce cheaper but employ far fewer people in a country where power is scarce and labour-abundant.

The government's sabotage of rural employment schemes is only going to make this difficult. For a reference, textile mill workers rendered obsolete in 1993, are getting three thousand rupees per month under Textiles Workers Rehabilitation Fund. They are not able to survive on these funds. Alternative employment for them itself is a problem without adding handloom workers to the mix. 15 lakh handloom households (53 per cent) undertake handloom work exclusively for commercial purposes, while four point three eight lakh households (16 per cent) produce for both domestic as well as commercial purposes.

"At present crores of people are waiting for their jobs, every year more than 60,00,000 graduates/post-graduates/technologists are coming out from the universities/institutions. Why the government is not providing the employment to these youth, if there is any possibility," Marchala demands to know. "Another one important issue is if we allow the power looms in India; China, Bangladesh, Sri Lanka, Pakistan, Germany, Korea and Thailand exporters are ready to dump their products in the Indian domestic market. It has not happened yet, because varieties are reserved for handlooms exclusively."

"Mechanisation never creates employment, our India has plenty of human resources. They should be employed by production activity. It is handlooms in rural India. No other industry except the service sector. Service sector also cannot provide employment regularly." It has been noted before by Ravinder Kumar that India had not added jobs in agriculture or manufacturing since 1995. Where is the rural person to seek employment?

"If we allow the power looms to produce the silk/cotton saris and dress materials, it will ruin the total handloom sector without any doubt. It will to the starvation among the weaving community and some parts of India it will lead to armed struggles, for example Jammu and Kashmir (where the official records require the government to adopt the Handloom Reservation Act or enact something similar, yet has not, resulting in the famed Pashmina being woven on power looms, damaging the livelihoods as well as traditional craft). Over 60 per cent of India's weaver households reside in the Northeast and earn about three hundred rupees per day. What happens of them and what will the impact of their disenfranchisement be on the regional unrest?"

Is this the future of our traditional arts at the hands of the government that appears to have interest in promoting both handlooms and traditions? Are we going to have exquisite silk saris produced by power looms that copy traditional designs and starve traditional weavers? What does a Ludhiana power loom's Pashmina shawl even mean?

"On 29,80,000 handlooms more than 65,00,000 families of 1,20,00,000 people are depending for their livelihood. All these people will be abandoned by the state if power looms replace these creators of exquisite crafts like so much horsepower labour mass producing identical designs."

The secrecy around the proceedings is ominous. This government has shown little inclination for accountability. It now depends on us to ask questions that require answers.

(This article first appeared on aamjanata.com.)

#Handloom Reservation Act
The views and opinions expressed in this article are those of the authors and do not necessarily reflect the official policy or position of DailyO.in or the India Today Group. The writers are solely responsible for any claims arising out of the contents of this article.