Handwara: 16-year-old girl was detained for 27 days. Where's the outrage?

As much as it is disappointing to see state machinery scuttle the legal battle, it is far more upsetting to see silence of mainstream feminist groups.

The 16-year-old molestation victim from Handwara is in no mood to give up her fight against her molester as well as against those who are trying to cover up the crime.

On May 16, the girl's family had sent an application to Special Investigation Team (SIT) for registering two FIRs - one against the Army personnel of 21 Rashtriya Rifles who allegedly molested and intimidated the minor, and the second one against the SP Handwara, Ghulam Geelani Wani who recorded and circulated the video of the minor without the consent of her parents. Despite so many days having passed, no FIR has been registered so far.

It was on April 12, 2016 that the minor girl was allegedly molested by the soldier outside a public toilet at Handwara market. It sparked protests in Handwara.

This, in turn, led to a crackdown by the police and military in which five civilians were killed. Meanwhile, the girl was kept in "protective custody" by the police, which was nothing but the illegal detention of a minor. She was finally released on May 10, after spending 27 days in police custody. 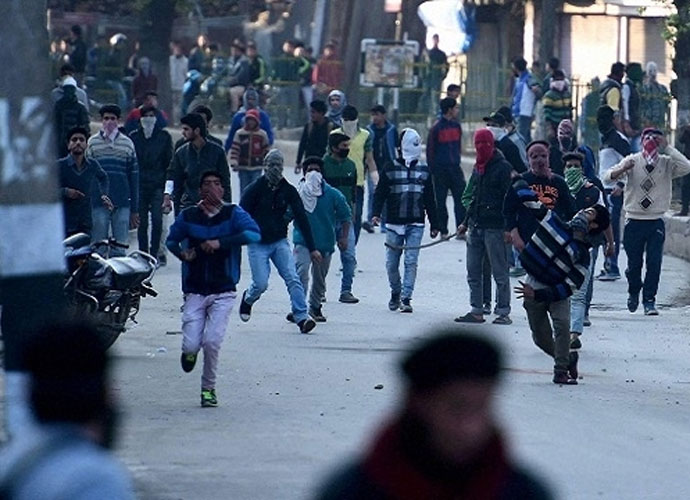 The molestation sparked protests in Handwara.

Was the minor not vulnerable enough to be advocated for? Or, was the first circulated video, where the girl gave a clean chit to Army, the reason for this non-intervention?

Also read: How dare PDP-BJP shame a schoolgirl to save Indian Army face

Following the circulation of first video, the chest-thumping brigade took a moral high-ground on their Facebook walls by making statements that the girl's agency should be respected as she could have had a liason with the armed personnel in question.

While it is completely undeniable that the girl's agency should be respected, it is also pertinent to note the rather negative relationship of Kashmiri women with the State, in particular, the armed forces.

The impunity with which the armed forces have operated reeks of a colonial male privilege. Sexual violence perpetrated by the security personnel is not unheard of in Kashmir. This colonial privilege gets espoused repeatedly by the hyper masculine nature of the Indian state and its machinery in Kashmir.

A rather visible manifestation of this is the slogan "Ajeet Hai, Abheet Hai" (We are invincible, we are fearless) that the Army has plastered all over the Valley. It had even painted the slogan on a mountain on the Zabrawan range so that it was visible from anywhere in Srinagar.

A far more violent manifestation were the Kunan-Poshpora mass rapes of February 23, 1991. Since the power dynamics between the gun-wielding oppressor and the oppressed female will always be woefully lopsided, the hierarchy of colonial privilege gets often inter-locked with the local sentiments of patriarchy. This seems to have been the case in the Handwara incident as well.

Also read - Kunan Poshpura to Handwara: Justice is a half-widow in Kashmir

This silence of the country's feminist groups also makes one revisit the relationship mainstream civil society has had with Kashmir, in general, and Kashmiri women in particular.

The silence did not break even after the girl and her family reached out through another set of videos in which she cleared how the police intimidated her into making a false confession. Even if one forgets the incident for a moment, how could one turn a blind eye to the prolonged illegal detention of a 16-year-old girl?

Ask any Kashmiri and they would tell you how local elites have forged solidarities with the mainstream civil society and posited as yielders of knowledge and power. But since they have their political moorings, their interventions have not been free from political and class biases.

The silence over the Handwara incident is only the latest in an entire series that includes the Kunan-Poshpora mass rapes and the Shopian double rape and murder. The approach of mainstream feminists has primarily been to plant exogenous discourses and structures which have undermined the local capabilities and focussed on the normative themes like "emancipation" and "development".

The inevitable result is the deepening of consumerist and corporate values, concerned only with the women’s advancement up the corporate and government ladder. Take, for instance, the manner in which women achievers from Kashmir are hailed – from chief minister Mehbooba Mufti to 17-year-old pilot Ayesha Aziz.

The mainstream activists have also come up with a monolithic image of the Kashmiri woman as a perennial victim. Such flawed analytical and methodological approaches distort the understanding of the various types of agency Kashmiri women have shown over a period of time. Women have been waging battles against atrocities, sexual violence, enforced disappearance or simply against day-to-day harassment. But these efforts are seldom noticed because of the limited prisms with which Kashmiri women are seen.

Chandra Talpady Mohanty in her book Feminism without borders: Decolonising Theory, Practicing Solidarity explains how western feminists constitute themselves as active agents of history - liberated, educated and free - through the object status that impose upon their downtrodden sisters.

Mohanty argues that the power exercised through such constructs is not unlike that exercised by other western colonialist discourses. Accounts emanating from mainstream activists posit Kashmiri women in similar frames of reference. But now such assertions are now being challenged not just by the ever growing women activist network in Kashmir but also by the victims themselves. The courage exhibited by the Handwara minor inspires many of us and also punctures elite narratives that see women as perennial victims with a few occasional achievers.

The Handwara case takes me back to the famous interview of the African American feminist Audre Lorde with Karla Hammod. Audre said, "As a black woman, I have to deal with identity or I don’t exist at all. I can’t depend on the world to name me kindly, because it never will. If the world defines you, it will define you to your disadvantage. So either I am going to be defined by myself or not at all."

This is precisely the challenge Kashmiri women are facing.

Post your comment
#Kashmir, #Handwara Killings, #Handwara girl
The views and opinions expressed in this article are those of the authors and do not necessarily reflect the official policy or position of DailyO.in or the India Today Group. The writers are solely responsible for any claims arising out of the contents of this article.

The writer is a doctoral candidate at Jawaharlal Nehru University.