How Modi's Hindi-first is another step to divide India

The central government's glaring push for the language risks widening the divide in the highly diverse country.

On April 22, DMK leader MK Stalin of Tamil Nadu made a serious accusation against the Narendra Modi government of violating the Constitution and the rights of non-Hindi speaking citizens by pursing the policy of "Hindi imposition" and warned the central government not to invite another anti-Hindi agitation. It is not an empty threat, considering DMK’s history of fighting any Hindi imposition policy of the Centre in the past.

What has triggered DMK’s threat now is the President’s recent acceptance of the recommendation of the Committee of Parliament on Official Languages for speeches to be delivered in Hindi by political dignitaries if they can read and speak the language.

The President also in principle accepted to make Hindi a compulsory subject from Class 8 to Class 10 in all Central Board of Secondary Education (CBSE) and KendriyaVidyalaya schools. Even state-owned airline Air India has been asked to use Hindi to issue tickets.

For Modi and the Sangh Parivar, “Hindu, Hindi, Hindustan" has always been an article of faith. Iconic ideologue of the RSS Guru Golwalkar defined Hindu Rashtra in his book We or Our Nationhood Redefined (1939, pp. 43-44) as follows: “In this country, Hindustan, the Hindu race, with its Hindu religion, Hindu culture and Hindu language (the natural family of Sanskrit and her offsprings) complete the Nation….”

Golwalkar saw nation-building as an exercise of bringing together these five unities, geographical, racial, religious, cultural and linguistic. This philosophy drives Hindutva groups to make Hindi the national language of India.

Though the official census figure puts 45 per cent of the country’s population as native Hindi speakers, this number is actually 26 per cent as the census lists Bhojpuri, Magadhi, Marwari and many other linguistic traditions and dialects as Hindi speakers.

Since Modi’s rise to power, he and his party are not only promoting Hindu-first but also Hindi-first policy. The BJP has been always anti-English and its leaders often refer to the country’s English-speaking elites as "Macaulay's children". 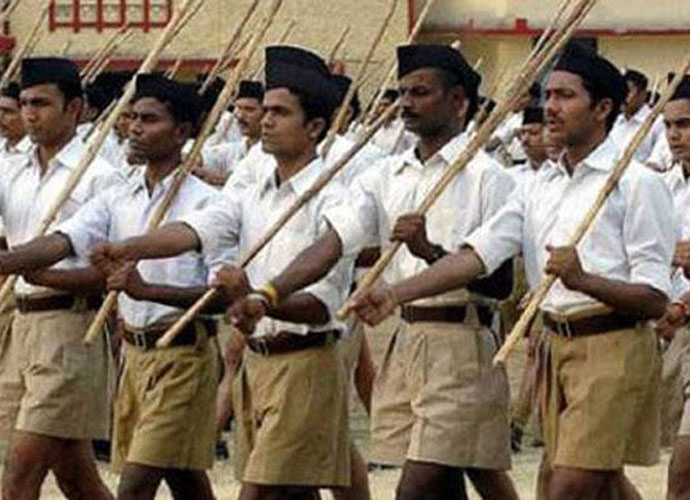 For Modi and the Sangh Parivar, “Hindu, Hindi, Hindustan" has always been an article of faith. Photo: India Today

A day after taking office as Prime Minister in May 2014, the Modi government had issued an order asking officials to mandatorily use Hindi on government social media accounts. After a backlash from the southern states, the government later explained that the order only applies to Hindi-speaking states.

In 2014, Modi, his ministers and party MPs all took oath in Hindi and some even in Sanskrit. Modi even announced he would speak to other foreign leaders in Hindi, not English. He addressed the UN General Assembly in Hindi, not in Gujarati.

When US president Barack Obama visited India in 2015, Modi again spoke in Hindi in official meetings (it is another matter that his name was not written on his suit in Hindi alphabets).

Modi regime’s glaring push for Hindi risks widening the divide in a highly diverse country like India. "Hindi imposition" faces open opposition from the southern and eastern states. In 2014, an MLA in Odisha (Odia has been given classical language status together with Tamil, Sanskrit, Kannada, Telugu and Malayalam) was even taken to task by the Speaker of the Legislative Assembly for using Hindi during the question hour.

I had directed more than a decade ago an international project for a UN research organisation to analyse the use of language as a group’s identity and power within a nation-state project. For centuries, efforts have been made to achieve the ideal nation state. This process involves projecting the cultural traditions and language of one of the groups of the society as the national culture and national language of the country.

The dominant group usually argues that use of multiple languages in education and administration may bring long-term or permanent linguistic division, and so opts for a single language policy in the name of assimilation.

Some even suggest that the problems of minority groups can be resolved through their successful lingual integration into the group in power. This version of the assimilation process is misleading in two ways.

The use of one national language does not automatically produce ethnic unity or shared culture. At best, it facilitates communication between groups and gives the appearance of uniformity to the outside world. However, invariably the imposition of one language provokes resistance from the other language groups.

This state imposition of a one-language policy as part of a nation-building exercise was the cause for the break-up of Pakistan and the creation of Bangladesh. The common religious identity was not enough to keep the country together. A single-language policy also triggered violent civil wars in Sri Lanka and Turkey. Language is also at the roots of the ongoing secessionist movements in Catalonia in Spain and Quebec in Canada.

In most countries, whether developing or industrialised, democratic or authoritarian, members of language minorities mobilise to preserve their languages by hook or crook.

As our UN project had found out, language is not only important to preserve identity but also critical for the groups to get access to power. Language domination is far more precarious for peace and stability of a state than religious and cultural domination.

Anti-Hindi protest is not new to India, as it dates back to pre-Independence period. Tamil Nadu has already witnessed two major anti-Hindi agitations in the past. A DMK-led protest in 1965 had stopped the thoughtless plan of the Lal Bahadur Shastri government to adopt Hindi as single official language.

The new push by the present regime for Hindi has not only brought serious disquiet in Tamil Nadu, but other non-Hindi speaking states are also getting nervous.

Modi’s Hindu-first policy has given new life to the secessionist movement in Kashmir in the last two years. But, if the Hindi-first policy is pursued with the same vigour, India is probably going to witness many more such movements in its southern and eastern parts.

As Telugu superstar Pawan Kalyan tweeted on April 23: “If the Centre doesn’t respect sub-national identity in a country like ours; which is known for cultural, linguistic and ethnic diversity, then they are creating a fertile breeding ground for separatist movements.”

One can just hope good sense prevails before it is too late.

#Narendra Modi, #Regional Languages, #Hindi
The views and opinions expressed in this article are those of the authors and do not necessarily reflect the official policy or position of DailyO.in or the India Today Group. The writers are solely responsible for any claims arising out of the contents of this article.