3 years of Modi government has turned India into Hindu Rashtra

It’s time to stop fooling yourself.

It’s three years of a rumbunctious Modi sarkar and, to the thrill and ecstasy of the Sangh Parivar and their devout followers, we are now officially (though not constitutionally) living in Hindu/Hindutva Rashtra.

Have no delusions, those who live in dread of a militaristic, supremacist, Hindutva nation; it’s already here, trampling citizens from marginalised communities like Dalits, tribals, minorities, and the poor who face the jackboot of aggressive and militant religious bigotry; apart from assault on citizens who stand up for the Constitution, human rights and civil rights activists, free thinking doctrinaires, and all those who challenge an ultra nationalist state.

Still unconvinced? Here are six obvious reasons why you are already living in Hindutva Rashtra, and it’s time to stop fooling yourself.

Militarisation of Hindus: Veer Savarkar, the Father of Hindutva nation, has said Hindus are a race “when the foremost band of the intrepid Aryans made their home and lighted their first sacrificial fire on the banks of the Sindhu, the Indus…” and goaded Hindu youth with the call, “militarise the Hindus, Hinduise the nation”.

Is it any surprise then that his ideological legatees, the RSS, BJP and their many-spawned Hindutva organisations, have launched a campaign to idolise the armed forces conjuring images of forced heroism, bravery, courage and other military fantasies? Have no delusions, those who live in dread of a militaristic, supremacist, Hindutva nation - it’s already here. Photo: Reuters

According to the philosophy of Hindutva muscularity, the Army and security forces can do no wrong when they vanquish enemies of the nation, both from outside and within the country, and anyone who challenges the country’s “brave soldiers and their sacrificial valour” for excessive military force, human rights abuses, rape, murder, looting, are instantly branded traitors, anti-nationals, betrayers and criminals.

The last three Modi years have blazed with romanticising the Army and its soldiers, flexing the military muscle of “strong” government and State, pulverising anyone who dares question it, on television screens, social media or in public discourse.

The latest being the controversial medal of commendation award to Maj Leetul Gogoi by the Army Chief - the former had infamously used a human shield to retrieve his colleagues from a polling village in Kashmir.

All this in contravention of military convention and law; that too when the Army court of inquiry is yet to complete its investigation into the incident. As far as Modi’s muscular militarisation goes, even the Indian Army’s own dictum of “honesty, courage and fair play, however strong the provocation” can be squashed for the illusion of a strong, authoritarian nation.

Doctrine of Tradition and Conservatism: Hindu traditions are not necessarily conservative, but Hindutva prudery and purity celebrates a hidebound orthodoxy that is appalling to Indian syncretism and pluralism.

In the Hindutva moral universe, equality and choice is for heathens with loose morals; here, men are strong, commanding, virile - think, imagery of the 56-inch chest of Great Leader - and women are bashful, demure and docile. And in case you forget this truth, there’s the moral police like the Hindu Yuva Vahini, Ram Sene, Bajrang Dal, VHP, and hundreds of Hindutva fringe groups which will smash, bash, lynch, and even kill all those who threaten Hindutva dharma and sanstha; with anti-Romeo squads and murderous vigilante squads, ban love jihad, cow beef, cow slaughter, all with assured immunity from the government, law and police. 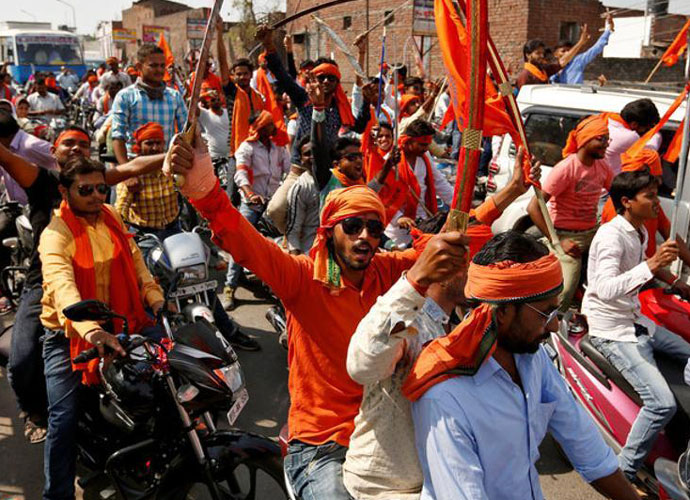 There’s the moral police like the Hindu Yuva Vahini, Ram Sene, Bajrang Dal, VHP, and hundreds of Hindutva fringe groups which will smash, bash, lynch, and even kill all those who threaten Hindutva dharma. Photo: Reuters

And just in case you’ve missed all the violence, there’s RSS chief Mohan Bhagwat who will remind you that a woman’s duty is only to her husband, she is bound by the contract of marriage to look after him, and if she does not fulfil the obligation, he is free to dump her. Sexual violence like rape, says Bhagwat, is a western concept as it happens only in urban areas and not in his idyllic villages.

Super Babies: Now that Bhagwat has underlined the qualities and duties for a chaste wife, can making babies be far behind? And horrors, how does a good Hindu man, who has the misfortune of marrying a dark complexioned wife, have progeny that are tall and fair-skinned?

Have no worries, Hindutva Rashtra has the answer - the "medical wing" of the RSS, Arogya Bharati, says they have the ancient secrets for conceiving a "susantan" or a super baby, through natural birthing, or garbh sanskar.

This super baby will be tall, fair, brave, creative, and also less stubborn than most children. There’s a strict regimen to be followed to conceive the super babies - three months of "shuddhikaran" or purification, planetary position will decide the time of intercourse, couple must refrain from sex during pregnancy, apart from Ayurvedic herbs, Panchkarma therapies, diet, yoga and music.

The project has been started in Gujarat - where else - and they have already made 450 "uttam santatis" perfect, customised babies. Every state will have centres by 2020.

Obsession with Glorious Past: Of course, we’ve survived Prime Minister Narendra Modi’s glorification of ancient India, after all he is a devout RSS swayamsevak, with his public pronouncements of how genetic science and surrogacy existed in Mahabharata, and that Ganesha was proof of plastic surgery; but the Sangh’s ongoing programme of changing textbooks and curriculum in schools and universities to incorporate “Indian wisdom, science and technology” of galactic space ships and inter-planetary flying; vedic maths and Shaivic science, apart from many other ancient Indian success stories, is here to stay.

And the propagation of this wonderous mythological renaissance, they say, is the only antidote to the virus of Leftist colonial ideas that has contaminated Indian education and young Indian minds, and must be banished forthwith. Forget the free flow of ideas, the battle is already raging in many universities between Sangh history and the Communist and rationalist cabal. 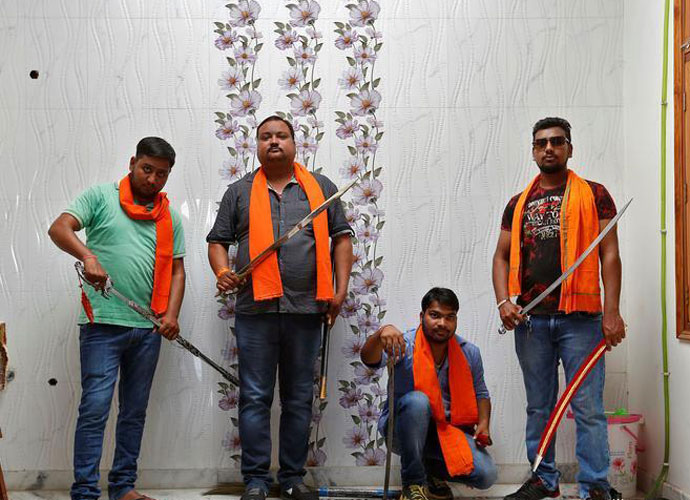 Of course, the recipient of the attacks are poor and helpless Muslims, Dalits and tribals. Photo: Reuters

Whirring Nationalism: No, you haven’t stumbled onto the sets of blockbuster Baahubali 2 but many parts of the country now resemble the garish set of Hindutva warriors of tilak and tarazu, screaming Bharat Mata ki Jai and Vande Mataram, and vowing revenge and slaughter for imagined grievances and hurt of India’s subjugation under the Mughals and lesser, of the British.

Of course, the recipient of the attacks are poor and helpless Muslims, Dalits and tribals, who are browbeaten to accept Hindu moral values (read Hindutva) of dharma and purity, awakening "chaitanya" Hindutva consciousness, and motivation to reclaim Hindutva pride in the Motherland.

In this Hindutva fantasy of whirring imagery of gods and goddesses is blatant jingoism, militant patriotism, martyrdom of soldiers, supremacist religiosity, patriarchal and anti-women, poor and weak. And, of course, the ritual mantra of the Great Leader’s intonation, Maan Ki Baat on radio, for the rapturous, unwashed masses.

Mighty State: Did you say this is a parliamentary democracy, where the democratic legislature process holds sway? The Modi government, despite having a brute majority in the Lok Sabha but in a minority in the Rajya Sabha, has bypassed democratic demands through the ordinance route, bringing in almost two dozen changes - from amending the TRAI Act at his first cabinet meeting in May 2014, to allowing Nripendra Mishra to take over as his principal secretary (as a former TRAI chief, Mishra cannot be appointed in any central or state posts); to amending the Land Acquisition Law of 2013 three times (the law was active for 164 days) for his government to do the needful; so much so, the Supreme Court called it a fraud and the President was forced to make worrying comments.

And so, at long last, the Hindutva dawn has come to shine and usher in the glory, splendour and power of a shimmering grand past. Are you invited?

Also read: It is important to understand and reject Hindutva

#Narendra Modi, #BJP, #RSS, #Hindu Rashtra
The views and opinions expressed in this article are those of the authors and do not necessarily reflect the official policy or position of DailyO.in or the India Today Group. The writers are solely responsible for any claims arising out of the contents of this article.