Give us back our Hindu rate of growth

We have been told to despise the "Hindu rate of growth". This invidious expression was improvised by Proffesor Raj Krishna of Delhi School of Economics, University of Delhi, as a derogatory reference to our slow rate of economic development between 1950 and 1980.

Since then we have been kicking the stars. Our growth rate has doubled. Our malls and supermarkets glitter with goodies. We nearly bump into billionaires on the street. It’s a new India, which has left the Hindu Bharat way behind.

Sounds exciting. But, on the ground, the realities are grim. Delhi, like most other cities, is hardly liveable. Don’t worry: there is good news. A Canadian start-up company - Vitality Air - is planning to sell bottled, healthy air to all of us, after its crowning debut in China (2015). According to the spokesperson of the company, India will be its largest market, given our dangerous levels of air pollution.

Children are the hardest hit. One in three currently suffers from respiratory problems. One rarely feels fresh even in the early morning hours. Want to see a star or two at night? A polite suggestion: do take a train out of Delhi. 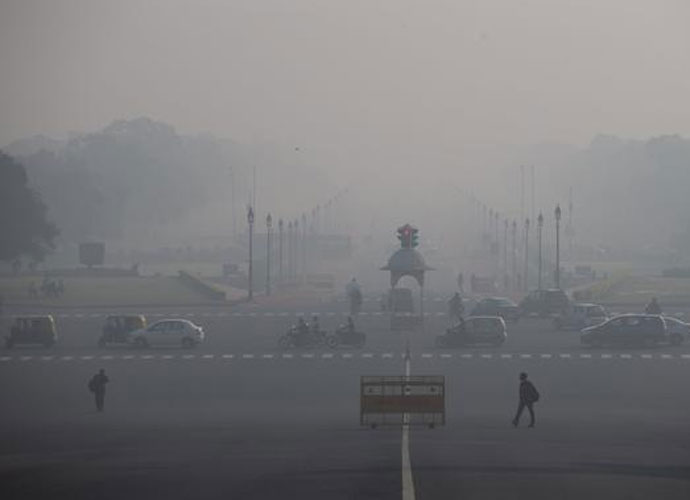 Delhi, like most other cities, is hardly liveable due to pollution.

The scary thing about the degradation of our living environment is that we may wake up to its perils only too late. Like how we treat the statutory warning on cigarette packs: "Smoking is injurious to health". Millions of chain-smokers know it by heart. But it does not prevent them from smoking; for the danger lurks only in the future. It is not rare to see people visiting their friends and relatives in cancer wards and, feeling distressed at the suffering they witness, go out and light a cigarette!

Such is human nature. Wisdom comes too late. Human beings, said Hegel, the German philosopher, are like owls. We open our eyes only after the sun goes down.

One striking outcome of our fast-paced growth is the ascendancy of a wasteful way of life. The Hindu way of life, by the way, was benign for its reciprocity to nature. It deemed plundering our earthly home a crime. It beats me how love for the "motherland" can go hand-in-hand with a predatory paradigm of development that poisons and despoils Mother Earth.

Today it is difficult to decide who we are culturally. Are we American Hindus? Or, Hindu Americans? Senior BJP leader LK Advani used to famously insist that all Indians are culturally Hindus. This is said no more. Culture has avenged itself on Advani. One of the juiciest ironies in the cultural history of humankind is that Hindutva protagonists - with cultural nationalism as their erstwhile creed - are championing the de-Hinduisation(or westernisation) of our culture.

No country hitched to the screaming non-Hindu rate of growth has managed to avoid wastefulness from its way of life. On the average, an American consumes the equivalent of twelve Indians. He tops the pollution chart. But, global warming or global freezing, the American way of life, asserted George Bush stridently at the Rio Summit (2002), "is not up for negotiation". The nexus between frenetic development and fulsome wastefulness is an inflexible dogma.

When leaders and policymakers of the developed countries woke up to the environmental horror that hyper industrialisation was causing, environmentally degrading industries began to shift to Afro-Asian countries even prior to globalisation. Highly toxic industrial waste was similarly disposed of in large quantities.

Vypeen, a beautiful island in Kochi, Kerala, was one such victim. Millions of tons of toxic industrial waste - including radioactive material - is being dumped into the sea, making fish-eating a scary experience, except for the blissfully ignorant. You don’t have to be a connoisseur of fish preparations to know that the way fish tastes these days is really fishy.

Industrial growth compels faster agricultural production. It is customary to blame this on population growth. It is of course true that we have to produce more, to feed a growing population. But that is not the total picture. Aggravated and wasteful consumption plays an equally important role.

There is a limit to which agricultural growth can be pushed, without using hazardous chemical pesticides and fertilizers. This blurs the distinction between development and destruction. As of now, people are straining their resources to shift to organic farm produce. The items in this category cost 50-75 per cent more than their unsafe counterparts.

The plight of the lower middle class is particularly pitiable. They know that they are poisoning themselves by eating non-organic vegetables and milk products. But they cannot afford to go organic. They eat in anxiety. Those who are buying organic, but have no means to ensure that they are getting what they are paying for, worry that they are being taken for a ride. So, they eat in unease.

Irony of ironies. Thanks to our non-Hindu rate of growth, food insecurity has spread almost uniformly throughout the country. What is new is that "food security" now has two faces. Let us call them: (a) Food-security-for-the-morrow, and (b) Food-security-for-today.

The first refers to the worry if we’ll have food tomorrow. This is not the case with, say, 50 per cent of our people. The second pertains to the worry if the food we are eating today would land us in trouble tomorrow. The factor common to both is insecurity about tomorrow. While the denizens of Bharat are afflicted by category (a), privileged citizens of India are gnawed by category (b). Both live in food insecurity.

How does it profit us, if the trinkets of hyper-development have to be paid for with our life itself? It is like selling your child to make the money for buying her a birthday frock.

Take away everything. Only give us back our Hindu rate of growth. As Eric Garner, the African American, cried while he was dying in the chokehold of a Mississippi cop, "let me breathe . . . let me breathe". Given the alarming pace at which the air we breathe is becoming unbreathable, this could well be our collective slogan.

We prefer, if you don’t mind, the Hindu rate of growth to cancer in our vitals, heartbreaking deformities in our children and their premature death.

Access on the internet spine-chilling photographs of the 2,700 Endosulfan-deformed children in Kasargod, Kerala. Endosulfan is an unpatented organochlorine insecticide, which has devastated the lives of tens and thousands of people in God’s own country. Besides the children born with deformities, thousands of adults remain critically ill.

Have a look at any one of them: you’ll need no further convincing

#Pollution, #Sustainability, #Environment
The views and opinions expressed in this article are those of the authors and do not necessarily reflect the official policy or position of DailyO.in or the India Today Group. The writers are solely responsible for any claims arising out of the contents of this article.