Love in the time of cow

Hindus' attachment to their bovine divine is deeper than ever.

Hindus love the cow. And the latest victim of that love is none other than the prime minister of India, Narendra Modi.

After months of public outcry over the rising viciousness of cow terrorism, he has finally spoken truth to lunacy.

And it is calling down on him the wrath of cow-lovers. Someone has even predicted World War III over the cow.

Between gobar and piety

Gobar-lovers are clearly resentful. Why?

Ask the 76-year-old RSS Akhil Bharatiya Gau Sewa pramukh, Shankar Lal, who smears the back of his cell phone with fresh cow dung.

He believes, it will save him from harmful radiations.

He also must be using a lot of cow excreta and urine, because he says "those are like nectar" and can "save humans from any disease".

There are others who think the PM's gesture will get in the way of their spiritual salvation.

Even the esteemed members of our Constituent Assembly in 1948 managed to put cow protection as a directive principle in the Constitution by looking at cows as commodity, "from an economic point of view".

As Pandit Thakur Dass Bhargava, Sanskritist and member of Indian National Congress, had argued: "The cow is Kamdhenu to us."

Poet, scholar and folklorist AK Ramanujan always ignited scholarly and popular controversy, but it's hard to ignore his insight into the Hindu mind.

"Contrary to the opinion that Indians are 'spiritual,' they are really 'material minded'," he once wrote. Indians are pure and simple materialists. "Money motivates us like nothing else does."

Yale mythologist, Edward Washburn Hopkins, writes: the Vedic people knew the boar, the wolf, the monkey, the swan or goose, the eagle, the crocodile, the serpent, and before its close the elephant, and the tiger. Yet why did they worship none of them, nor showed any sign that they felt themselves akin to any of these animals? 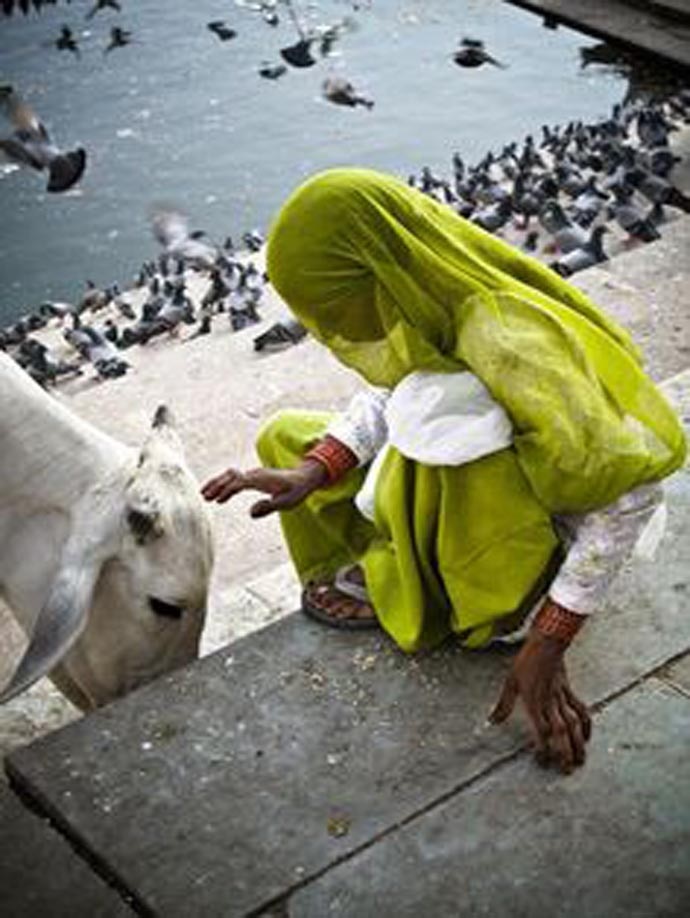 The deification of cows is believed to have been gradual. Vedic people were pastoralists, with cattle as their main source of wealth. In early Vedic age (Rig Veda), a cow would be killed for an honoured guest.

But over the centuries, the cow became reserved as a milk-giver, slowly attaining divine attributes. But this divinity, as Hopkins points out, lay squarely on its use.

The Kamdhenu is a metaphor, of course, for abundance: the miraculous cow of plenty in Hindu scriptures, that emerged out of the cosmic churn, along with Lakshmi, the goddess of affluence, abundance, and auspiciousness.

But the image of the Kamdhenu, a white cow with the face and breasts of a woman, continuously pouring milk over a Shiva Linga, makes me uncomfortable. Not to mention the concept that she provides her owner whatever he desires.

I recall a conversation I once had with a man from Uttar Pradesh, a driver by profession. This is what he had to say about his wife: "Woh bohut sushil hain. Gai jaisi (She is extremely good-natured. Like a cow)."

He meant it as a compliment, of course, just like parents who name their daughters Surabhi, Nandini, Nanda, Sunanda, Susheela or Sumana - all names of the Kamdhenu.

It makes me happy that my sense of unease is not just my own: feminist artist Gogi Saroj Pal had once observed with wry humour about her Kamdhenu painting: "People say of Kamadhenu, she is so good, she can fulfil all your desires. It is interesting that no one has ever asked about what Kamadhenu herself may desire… How can her own wishes be fulfilled? The same logic goes for a woman."

At a time when the mental life animals is emerging as a new field of research, cow-lovers need to think seriously about the animal they cherish.

A book, The Secret Life of Cows, by Rosamund Young offers some fascinating insight: cows can love, play games, bond and form strong, life-long friendships. They can sulk, hold grudges, they have preferences and can be vain. Above all, "they want to be left alone."

Modern livestock farming denies them intelligence or personality, focusing instead on maximising profit out of them.

Also read - So what if it was 'beef'? Nothing will ever justify Dadri lynching

How different are Hindu cow-lovers? If you check out gaukranti.com, allegedly India's biggest online store for cow products, you will be surprised with the range of commodities being traded: 34 types of food and beverage produced from the cow, 28 varieties of desi cow ghee, 14 types of cow urine, 68 puja utilities (cow dung cakes to incense), 170 cow cosmetics, 98 healthcare, 40 homecare, 169 daily use items, 170 medicines, 36 books or "gau gyan".

India has spent Rs 5.8 billion on cow sheds since 2014, reports Bloomberg. Distilled urine from female cattle currently fetches at least as much as milk. Baba Ramdev's Patanjali brand has as its bestseller, a cow urine-based floor-cleaner called Gaunyle.

Mayur Vihar in east Delhi must have had a surfeit of peacocks in some distant past. But no one has heard nor seen one - not in living memory.

Some remember parrots, streaking by like bright green darts. Today they are a rare sight. Like those chirpy brown sparrows that once flitted around.

Mayur Vihar has been busy upgrading itself as a hub of new urban modernity. First came the building boom in the 1980s, then the metro and now the elevated flyovers - unfinished and hovering overhead forever.

The once quiet tree-lined roads now reverberate with the keening whine of construction machinery, with cycle-rickshaw jungles developing on either side.

Chockablock with people, cars, bazaars, shops, schools and temples, it's a mess during the day. At night, unearthly howls of street dogs stalk the neighbourhoods.

No one noticed when the moo of cows started to disappear: those indolent, gentle creatures that hogged the streets, knotted at the mouth, oblivious to honking horns, foraging in garbage dumps.

But all is not lost. With rising cattle seizures after the beef ban, a lot of them have landed up at the local gaushala centres.

Sahkarita Marg in Mayur Vihar used to be a normal, messy road once. Now, it's a spick-and-span holy zone, with a plethora of temples on both sides of the road.

Here, in a yellow building, Shri Radha Krishan Mandir Goshala, hundreds of cows "live freely and fearlessly". In return, the cows give their milk, dung and urine.

The panchagavya concoction prepared by mixing cow dung, urine, milk, curd and ghee - specially recommended for puja and therapy - draws people from all across Delhi, as does the "gau katha" soirees, to spread awareness about the great virtues of the bovine mother.

One can only hope that's what the cows want.

#Economy, #Religion, #Hindus, #Cow protection
The views and opinions expressed in this article are those of the authors and do not necessarily reflect the official policy or position of DailyO.in or the India Today Group. The writers are solely responsible for any claims arising out of the contents of this article.