Why Hong Kong protesters can no longer back out

Protesters are not fighting against a piece of legislation. They are fighting something much bigger.

Tens of thousands of protesters in Hong Kong’s upmarket Causeway Bay sang the American national anthem as they marched waving the US flag, beseeching President Donald Trump to ‘liberate’ their city on September 8.

Trump, on his part, has so far oscillated between suggesting that China should “humanely” settle the problem in Hong Kong before a trade deal is reached with Washington, and called the protests “riots” that were a matter for China to deal with. But Hong Kongers have little in terms of options than to turn to Trump, whose support would mean little given his tendency to make flip flops on all things important quicker than he blinks his eyelids. 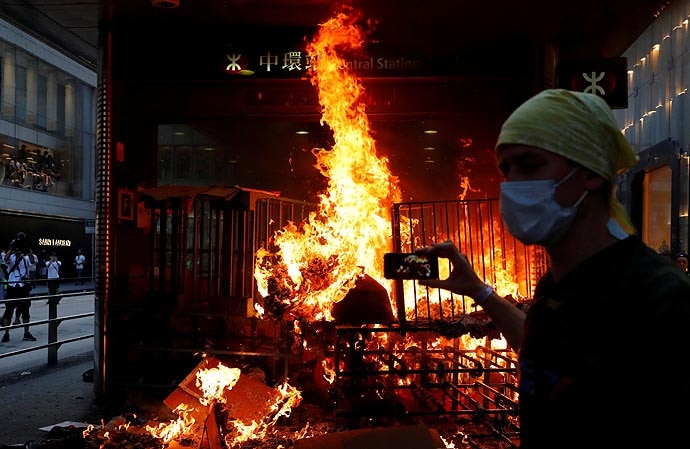 The protests in Hong Kong have been on for months now. (Photo: Reuters)

This turning to Trump for help is however indicative of just how lost protesters themselves are beginning to feel, nearly four months since the agitation first began.

Scores of participants have themselves been shocked by the scale of some of the protests and the violence that they have led to, by protesters and police. The protests in Hong Kong are intensifying despite the fact that the extradition bill has been shelved. The bill that allowed extradition of fugitives to mainland China was what triggered it all.

Hong Kongers are unrelenting in their protests despite the fear that they may be causing economic harm to the country and in that sense, shooting themselves in the foot. They began by blockading streets and occupying parks; they have now come to lay siege to the airport.

Worst is the fear that through these protracted protests, Hong Kongers are risking intervention from mainland China’s security forces.

So how exactly did the protest develop a life of its own, going out of the hands of those who started it?

On September 4, Chief Executive Carrie Lam announced withdrawing the extradition bill from the local parliament, hoping for an end to the impasse. The protesters then said that they have five — not one — demand. They have asserted that they won’t back down unless all five are met. The five demands on the table are:

3) An inquiry be ordered into police brutality

4) Those arrested be released 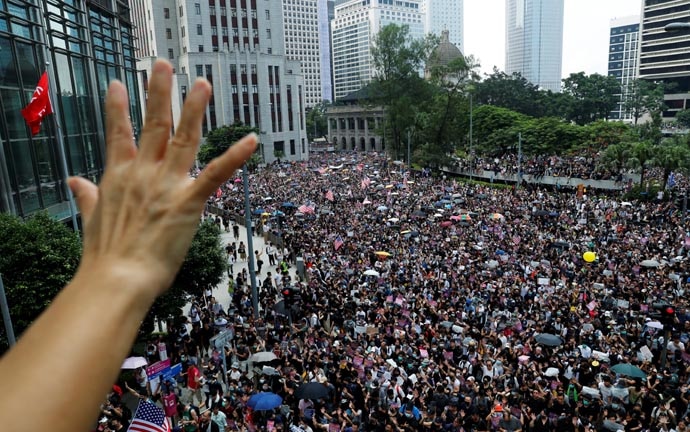 Protesters have refused to budge till all five of their demands are met. (Photo: Reuters)

People know it is difficult to mobilise protests of the scale currently underway every now and then. They have the momentum going; with the current agitation, they are looking to push the accelerator. And this is why this protest looks to be fuelling itself.

But would China budge?

China’s stability-obsessed Communist Party has long tasked the nation’s police force with stamping out any form of grassroots social or political movement. However, those efforts have intensified under Chinese President Xi Jinping, who has warned that China needs to do more to withstand “Western” influence that might undermine party rule.

China doesn’t directly rule Hong Kong, but its writ still runs large in the region. It is almost certain that China would not budge any further. The protesters know it too.

The British returned Hong Kong to China after ruling over it from 1841 to 1997, when it was returned to Chinese sovereignty. The current arrangement has permitted Hong Kong to function as its own entity under the name “Hong Kong, China” in many international settings such as the World Trade Organisation.

With its own currency and freedom to establish trade relations, Hong Kong enjoys freedoms that people in China are strangers to. It is this freedom that Hong Kong also fears for and wants to protect. Critics say the freedoms are on the decline. Rights groups have accused China of meddling in Hong Kong, citing examples such as legal rulings that have disqualified pro-democracy legislators.

But the current arrangement of “one country, two systems” is set to expire in 2047.

The protest movement has come up with its own anthem: Glory to Hong Kong. The strong nationalist undertones to the anthem are hard to miss, and that must be worrying China. But the protesters are worried too, because they know the history of how China has crushed revolutions.

It is already sending increasingly ominous messages to the protesters in Hong Kong. First Beijing released videos of Chinese soldiers garrisoned in Hong Kong drilling for urban fighting that looked more like a civil war. Now, footage has emerged of armoured paramilitary vehicles massing across the border.

But protesters look undeterred because they are guarding their way of life and their freedom — not just opposing a piece of legislation.

Carrie Lam’s bargaining powers with the Chinese government are not limited — they are non-existent. Trouble was anticipated in 2047 when the arrangement was supposed to come to an end.

It now looks like that trouble has been preponed three decades. The protesters probably did not know how big this would turn out to be when they got into it. For now, they look determined to not leave the battle in between — no matter how scary the consequences appear to be.

Post your comment
#China, #One country, two systems, #Carrie lam, #Hong Kong protests
The views and opinions expressed in this article are those of the authors and do not necessarily reflect the official policy or position of DailyO.in or the India Today Group. The writers are solely responsible for any claims arising out of the contents of this article.