The PM charged the Amarinder Singh government of dragging its feet in the implementation of central schemes and projects designed to bring succour to the people.

This past week, Punjab witnessed a rather unlikely face-off between Prime Minister Narendra Modi and chief minister Captain Amarinder Singh, who is widely known to speak his mind bluntly.

On January 3, PM Modi, who was in Punjab to address the Indian Science Congress, being held at the Jalandhar-based Lovely Professional University (LPU), used the occasion to address a Bharatiya Janata Party rally in the border district of Gurdaspur.

He took liberal potshots at the Congress leadership, not even sparing the CM.

The PM accused Congress chief ministers, including Capt Singh, of making false promises to farmers that their debt would be waived.

The PM also charged the Amarinder Singh government of dragging its feet in the implementation of central schemes and projects designed to bring succour to the people.

He claimed the state was being inexplicably tardy with the Smart City projects approved for Amritsar, Ludhiana and Jalandhar. He said progress on other schemes, like Atal Mission for Rejuvenation and Urban Transformation (AMRUT), was equally snail-paced in Punjab.

Training sights on the Congress-led UPA government, Modi derided its indifferent attitude towards the key projects that would have benefitted the people of Punjab. Specifically mentioning the Shahpur Kandi hydel project and the relining of the Rajasthan and Sirhind Feeder canals, he said it was left to his government to revive the long-pending ventures, which would irrigate thousands of hectares apart from generating power. 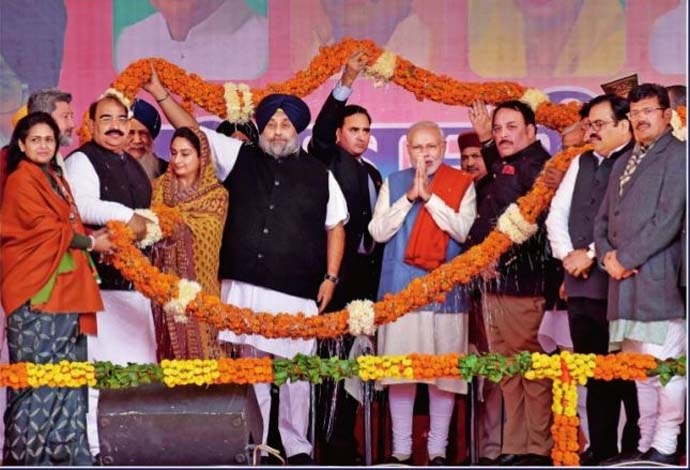 Also, speaking not far from where Pakistan Prime Minister Imran Khan performed the ground-breaking ceremony to build a pilgrim corridor to the Kartarpur Sahib gurudwaras, the PM mocked the Punjab Congress leadership for trying to appropriate the credit for something done by the NDA government.

Barely 24 hours later, Amarinder Singh hit back at the PM.

In a January 4 communiqué, the Punjab CM dismissed Modi as the “worst leader India has seen since Independence.”

Disputing the PM’s claims in Gurdaspur — from the 1984 riots and Kartarpur Corridor to the farm debt waiver — Singh said the PM had spoken nothing but “brazen lies” from the BJP stage in the border town. He said it was all done to mask the PM’s failure to fulfil every single promise made before being voted to power in 2014.

“Despite the fiscal mess your Bharatiya Janata Party and its ally, the Shiromani Akali Dal had left behind for us, we have managed to waive Rs 3,417 crores of crop loans of 4,14,275 farmers in just one year,” Singh said adding that an additional Rs 4,000 crores owed by another three lakh farmers would stand waived very soon.

Similarly, challenging the PM’s claims on Kartarpur and the Center’s contributions to the upcoming celebrations of Guru Nanak’s 550th Prakash Purab, Singh described PM Modi as “a master of deceit and disinformation.”

#Gurdaspur, #Narendra Modi, #Amarinder singh, #Punjab
The views and opinions expressed in this article are those of the authors and do not necessarily reflect the official policy or position of DailyO.in or the India Today Group. The writers are solely responsible for any claims arising out of the contents of this article.