From betraying rank homophobia, to the archetypal Bollywood hero's tired narcissism, this is old whines in new battles.

It wasn't meant to be but it became exactly that. A ménage à trois, even if only in misty tweet-worthy metaphors, involving none less than the Pope. Hrithik Roshan, he who could have been carved out by Michelangelo himself, must be dreaming of the Sistine Chapel ceiling now, particularly of the fresco The Creation of Adam, hoping for a helping hand from God.

The centre-piece of this museum of belligerence - that infamous tweet from Roshan in which he packages his denial about láffaire Kangana Ranaut with a hat-tip to the Pope - has now attracted a legal notice from an "offended party", with a placard deep-fried in the oil of irony: the Christian Secular Forum.

Christian Secular Forum in Mumbai sends a legal notice to Hrithik Roshan,seeks unconditional apology for his tweet on Pope Francis

Abraham Mathai, All India President of the Indian Christian Voice, is apparently "extremely hurt by [Hrithik's] disobedient and inexcusable comments, which has hurt the religious feelings and sentiments of majority of Christians across the world."

According to Mid-Day, Mathai has said: "We demand Mr Roshan recants his statement and issues an unconditional apology. While we respect Mr Roshan's personal life including his right to choose who he wishes to be in a relationship with, we do take offence at dragging a religious head into it just so attention may be diverted, and the media glare move away. Such statements are irresponsible and not called for by a celebrity, thousands of whose fans are from the Catholic community and who believe that the Pope is their religious and revered head."

It must be noted that Pope Francis is either still blissfully unaware of these concentric circles of maelstroms now hinged squarely on his name or title or his crown and sceptre, or he doesn't care two hoots. @Pontifex's latest tweet, as if a wink-wink-nudge-nudge reply to Mathai (just kidding) and his papier-mâché trolls of supposedly offended Christians (who? show me another), reads as follows:

If we open ourselves up to welcome God’s mercy for ourselves, in turn we become capable of forgiveness.

Yet, earlier this morning, in a telephonic interview to India Today, Mathai was heard raging mad about how Roshan's tweet insinuated that the "Pope was gay", and that inference (arrived at by Mathai himself) was enough to legally pin the actor down and set off that demand for written apology into the big bad world of Indian public sphere.

So, here are three counter-inferences that we can draw from l'affaire Hrithik-Kangana-Pope, and not one will go down well with the chronically offended brigade.

When Abraham Mathai cites his "are you suggesting that the Pope is gay?" argument to predicate the legal action (slapping Section 295A of Indian Penal Code) against Roshan, he is not defending his Roman Catholic brethren against an actor's poor judgement. He is, in fact, betraying the rank homophobia that only the gatekeepers of an obscurantist position insist upon. Obviously, with Section 377 reinstated by the Indian Supreme Court, homosexuality, and any remote innuendo suggesting so, are in the realm of shadowy criminality - legally impermissible but flooding the conversation all the same. Indian devouts and the respective figureheads, divided as they are by religious denominations, are nevertheless united by bigotry dressed as homophobia.

It might not please Mathai but in his staged and belated psyching out over Hrithik's "affair with the Pope" tweet, he is coming across as even more dated than the RSS ideologues, some of whom at least have started a telegenic flip-flop on the issue.

Moreover, Mathai is using the Pope as a shoulder to fire his utterly mindless punitive shot when the Pontiff has been increasingly softening up on the matter, even if only as an unofficial compromise at the moment. [Pope Francis' July 2013 comment - "If a person is gay and seeks God and has good will, who am I to judge?" - since backtracked, had given much hope to the international LGBT community.]

Given that the Pope is the butt of all jokes in European and American media, the demographically and statistically far more Christian world, who is Mathai to scream offence at Hrithik's cavalier attempt to sound smarter than himself?

Coming back to Hrithik's tweet itself: now isn't that a super-abridged guide to the Bollywood (former) male superstar's over-bloated self-worth? A testament to extreme narcissism of the obnoxious variety, which has little to do with his cinematic credentials (there may be some, no denying that)? Which is bursting at the seams with that familiar male entitlement in an industry which is taking baby steps to move away from its congenital hero-centrism? 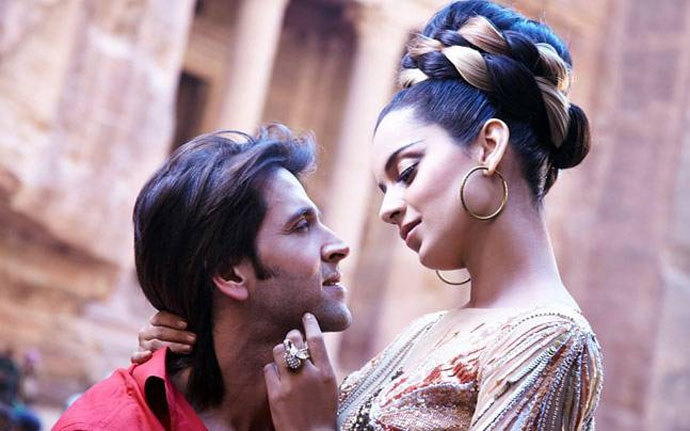 That our private spats go public when some of us inhabit that ethereal space called "celebrity" and Twitter is the route we take to vent ourselves is nothing new. Hrithik's serial philandering should be nobody's business, and Kangana Ranaut (who, in her own words is a B.I.T.C.H, that is "Babe in Total Control Of Herself") had coolly extricated herself from that emotional morass despite "proposals in Paris" and what not.

Now with three national awards in her kitty (she won the latest only yesterday for Tanu Weds Manu Returns), and a filmic oeuvre most can only envy from a distance, Kangana Ranaut, despite her perplexing taste in men, and despite being the one facing serial rejection from far lesser talents than her own, has come off almost unscathed of this "scandal".

So, while we hyperventilate over how wrong Abraham Mathai is to cry hoarse over a mere tweet, let's also not lose focus on how well brewed that said tweet is in the peculiar Made-in-Bollywood bias.

Yet, this isn't only a story of these fraught characters caught, as it were, in a Greek drama of hubris and hamartia. This isn't only the top headline that our tabloidised news culture will play around with in huge 72-sized fonts, but also, is the gist of many a hypocrisy unique to our age.

Is Hrithik's tweet only a reckless act by a fading male "A-lister" underlining his panic more than anything else? Is Bollywood, until sometime back a closely-guarded industry that hawkishly maintained its cliques and camps, equally panic-stricken at the relentless rise of female outsiders such as Kangana Ranaut? Are we, as a society, becoming absolutely nonchalant about myriad sexual liaisons strictly outside the hallowed marital bed, yet seem to be doing little to challenge the sexual pyramid that nevertheless puts the man, and the institution of marriage, on the top?

Is Abraham Mathai a relic of the past, or a curious breed of a modernity bending itself backward to accommodate orthodoxies and regressions of every kind? Is this a legal quagmire at all, and if it is, is this about freedom of expression or the freedom of getting offended?

And when, newspapers run this story by making yet another caustic insinuation, that because Mathai and Ranaut share their lawyer (Rizwan Siddiquee), they must be exchanging notes on how to bring the common offender - Roshan - down, don't they belie the same stockpile of tired old prejudices that the Queen star has fought so hard to overcome? Newsrooms, which are grossly male-dominated still, with both editorial decisions and number of bylines unfairly tilted in favour of men, despite gushing opeds on Kangana's meteoric rise and personal struggles, fail her spectacularly by running wild conjectures on such flimsy a basis.

Isn't Kangana Ranaut, who said no (and is perhaps the only one to consistently maintain that stance) to a fairness crème endorsement long before we paid our platitudes to #DarkIsBeautiful campaigns on social media, really the antithesis of everything that our morbid, misogynist mirror of a public culture holds out at us?

L'affaire Hrithik-Kangana-Pope may live by Twitter trends and tabloid headlines, but it won't be dying a death any time soon. Opinion pages will keep coming back to this peculiar tale told by an idiot, full of sound and fury, yet packing a significant punch far above its discernible weight.

#Pope Francis, #Kangana Ranaut, #Bollywood, #Hrithik Roshan
The views and opinions expressed in this article are those of the authors and do not necessarily reflect the official policy or position of DailyO.in or the India Today Group. The writers are solely responsible for any claims arising out of the contents of this article.