By shutting the door on talks, Hurriyat has betrayed Kashmiris and Kashmiriyat

The separatists, through their stubborn and short-sighted approach, have lost the faith of moderate Muslims, who remain a vast majority in the Valley.

The events of the last week have been interpreted by some as the failure of the State to reach out to the separatist elements in Kashmir. On the face of it, this does seem to be the reality of the situation. However, a more deliberate analysis of the situation reveals an entirely different picture, which is far more disturbing for the forces of moderation.

The two visits undertaken by the Union home minister, with the second one having been as part of an all-party delegation, was an attempt at outreach to all segments of the society. While some sections did come out and interact, with a view to resolving the disturbing situation, as well as the long-term challenge, others like the Hurriyat, refused to to do so, shutting their doors on a unilateral and well-intentioned attempt at reconciliation.

If one were to relate this refusal to interact on part of the Hurriyat to the meetings that took place in 2010 under similar circumstances, which did lead to peace and reconciliation, the change in attitude can be attributed to three distinct factors, which seem to be driving their stubborn approach.

First, unlike last time, when the Hurriyat had greater control over the crowds, this time around, despite the brave face on display, the Hurriyat’s influence over the common man has receded. There is a feeling amongst certain hardline sections of the population that the Hurriyat has failed to lead them towards declared goals and objectives.

Therefore, even if they were to appeal for calm and stop protests, it is unlikely that the agitators would heed to such calls. The option that remains with the Hurriyat is either face the anger of their radical base, or ride the wave of protests.

The Hurriyat seems to have chosen the latter option. They have calculated the potential gains of emerging stronger after the crisis, since they visualise their emergence as the only separatist organisation, which will have the right to negotiate any future settlement with the government.

This might just work in the short-term. However, the long-term threat that emerges as a result of the same, has been lost sight of. And to understand that, the history of the separatist movement in Kashmir has lessons that must not be forgotten.

The first group of people who were hounded out of Kashmir were the Kashmiri Pandits. The selective killing of some and the fear psychosis that followed it, led to their mass exodus. This happened at the behest of a conniving Pakistan and freshly radicalised youth from the state.

The second wave of radical thought and rejection of moderation yet again sweeps the Valley. The target of radicalisation is not merely the Indian State, as may be seen on the streets of Kashmir. It is the voice of reason and moderation.

This voice of moderation does not only belong to the political leaders. It also represents parents who do not want their children’s future to be shrouded in darkness. It echoes in the calls for restraint. 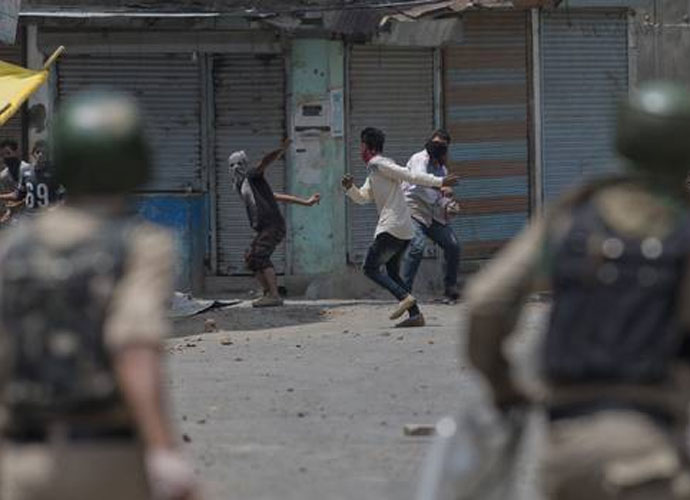 The chimera of azadi, that is being shown to the people, is merely a tool to retain and regain power and influence. (Photo: AP)

This time around, the wrath of frenzy will not be borne by the Kashmiri Pandits. It has already started affecting the moderate Muslim families. It is these people who will look to escape the mindless violence and aimless stalling of state institutions. The common people who resented the checking of their vehicles by security forces, are facing the reality of young children stopping the same buses to frisk them for their "enemies".

This had led to some Muslims leaving Kashmir to seek normalcy beyond the state. This trickle emanates from moderate Muslims, who want their children to go to schools. It represents people who do not want the virus of radical thought to take their children on a path that will push them towards the same end as the one chosen by Burhan Wani.

However, in doing so, they will continue to cede ground to rational moderate voices in Kashmir Valley, who want their normal lives back and along with it their self respect and honour.

The Hurriyat, through their stubborn and short-sighted approach has lost the faith of these moderates, who remain a vast majority in the state.

On the other hand, the radicalised youth can also see through the Hurriyat’s self-seeking ways, having been witness to their children having settled outside the state in comfortable and safe environs, even as they continue to call for others to sacrifice their lives. Thus, in the long term, the Hurriyat will not only become irrelevant for the moderates, but also the hardline youth.

Second, the Hurriyat by continuing on the path towards violence is contributing immensely to the radicalisation of Kashmiri society. Kashmiriyat, a term that is increasing being used by moderate voices today, does not merely represent the ethos of the society. It is both the shield against radical Islam and the glue, which bound different sections of Kashmiri society together.

Hurriyat’s adventurism threatens to loosen the bonds that Kashmiriyat represented. In doing so, they are unleashing the very monster that Pakistan attempted to create to contest India’s emergence, only to see it feed upon their own society.

The chimera of azadi, that is being shown to the people, is merely a tool to retain and regain power and influence. Ironically, it is a replica of Pakistan Army’s illusion of contesting India wanting to dismember Pakistan, that is sold to the population of the country in a bid to retain power.

Lastly, the Hurriyat, along with Pakistan, have underestimated the anger and disillusionment of the world at large with the employment of terrorism as an instrument of politics. It is for this reason that the diplomatic frenzy witnessed in Islamabad and Srinagar to internationalise the issue has been deflated in the face of global scrutiny.

The support of Pakistan that Syed Ali Shah Geelani uses as an anvil, is as credible as Pakistan’s own human rights record in Balochistan and PoK. This is all the more relevant, given their role in pushing small children in harm’s way in the Valley.

Pakistan has already succeeded in radicalising segments of Afghan society through their involvement there. It is surprising that sections within the Hurriyat are allowing them to play a similar role in Kashmir for their short-term gains.

It is often easier to choose the easier wrong in the face of the more difficult right. Kashmir is at the crossroads. The path being followed by the Hurriyat is likely to erode the moderate ethos of Kashmiri society, even as it will not get them the power they yearn for.

On the other hand, the option to contest what they see as injustice through dialogue, not only has better chances of success, but is also accompanied by strengthening of democratic values and traditions.

This, then, is truly the path of Kashmiriyat, Insaniyat and Jamooriyat that the Hurriyat must adopt, even it is for their parochial interest.

Also read: Why PDP and NC are two sides of the same coin in Kashmir

#Kashmir Unrest, #Hurriyat Conference
The views and opinions expressed in this article are those of the authors and do not necessarily reflect the official policy or position of DailyO.in or the India Today Group. The writers are solely responsible for any claims arising out of the contents of this article.