Sheikh Hasina visit: Why India and Bangladesh must not have a ‘friendly’ border

Both parties have a lot to lose from a porous line dividing our geographies and affecting our security and politics.

The smell of India-Bangladesh friendship has been wafting out of the Rashtrapati Bhavan kitchens lately. Nearly three dozen head chefs are intricately de-boning fishes, adding spices to the gravy, making the steamed bhetki or coconut prawns that much more enticing.

In 1996, Sheikh Hasina famously sent hilsa for then Bengal CM Jyoti Basu before the Ganga water sharing treaty was signed. Then in 2010 and 2016, she sent hilsa for CM Mamata Banerjee, and in 2013, regaled President Pranab Mukherjee with a stunning meal spread.

This time, however, there was no hilsa, since India and Bangladesh have made it illegal to catch and sell "juvenile hilsa", or the fish weighing less than 500gm. March-April is small hilsa season.

However, this relationship has a much stronger element than culinary diplomacy. It is the mutual admiration between PM Narendra Modi and his counterpart Hasina, the robust majority with which they rule, and their similar views on security and development which underline the ties.

While 22 pacts are already on the table, and much more is happening on the sidelines, there is one area in which we do not need all that bonhomie.

India and Bangladesh do not need a "friendly" border. Both parties have a lot to lose from a porous line dividing our geographies and affecting our security and politics. 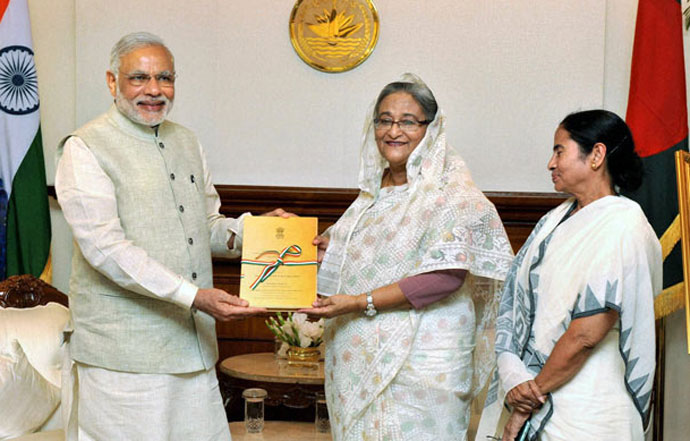 While 22 pacts are already on the table, and much more is happening on the sidelines.

India has for decades complained about illegal migration and smuggling of cattle, fake notes, arms and narcotics, and ISI-backed terrorists getting a grand gateway in the east. We haven’t done enough to stop it though.

But now elections in many states are being fought on these issues. Cow politics, for instance, has gripped India, and rampant smuggling of cows from all over India to Bangladesh and its fallout in the heartland and border states can’t be politically ignored.

Bangladesh’s concerns are equally crucial. Mamata government’s patience with Islamists with an eye on the state’s growing Muslim vote is proving disastrous. The Burdwan blast of 2014 exposed Jamaat-ul-Mujahideen Bangladesh’s (JMB) extensive network in Bengal and the anti-Hasina activities it carries out from Indian soil.

Terrorists linked to the July 2016 Holey Artisan Bakery attack in Dhaka were tracked to Kolkata. Such is the ease with which the most wanted jamaatis and terrorists of Bangladesh slip into Bengal and get warm sanctuary.

This is at a time when Hasina is ruthlessly cracking down on terror, choking its financial arteries by overhauling the once Jamaat-run Islami Bank, watching out for signs of indoctrination from villages to plush private university campuses.

She would surely not want the 4,068.7km border to be a walk in the lawn for these elements. Of the 3,284.5km supposed to be fenced, 2,634km of fencing has been completed so far. About 800km of riverine stretch is fraught with policing challenges.

There has been progress along Tripura and Mizoram — Chittagong Hill Tracks on the Bangladesh side — where fencing has been done. India has also allowed Bangladesh to use our border roads to build forward posts and other infrastructure, making it difficult for insurgent groups that camped in the forests to function.

In Meghalaya’s Dawki, a key forward post is being built. BSF sources say human trafficking and smuggling has ebbed. Border haats or local markets, a new joint initiative, is reducing the need to smuggle basic goods.

The flow of fake notes, sent into India mainly through Malda in Bengal, had stopped after demonetisation. However, fudged Rs 2,000 notes have started surfacing. Cattle smuggling is still a raging issue, unconfirmed figures putting it at around 60,000 a day.

The BJP and RSS have brought up the issue of demographic change, alleging that Bengal’s Hindu population has dipped by 8 per cent because of illegal migration from Bangladesh.

While the two nations must work towards easier visas, a lot more cultural exchange and tourism, our borders should be watertight.

A friend rings the bell and comes in through the door. They don’t need to break the window to get in.

Post your comment
#Indo-Bangla border, #Narendra Modi, #Sheikh Hasina, #India-Bangladesh
The views and opinions expressed in this article are those of the authors and do not necessarily reflect the official policy or position of DailyO.in or the India Today Group. The writers are solely responsible for any claims arising out of the contents of this article.