Why India has had to rethink its China policy

The Modi government has realised that the narrative with regard to boycott of Chinese goods was not a pragmatic decision.

While addressing a press conference on the sidelines of the National People’s Congress (NPC), China's foreign minister Wang Yi spoke about the need for greater cooperation between China and India and the necessity for resolving differences between the two neighbours.

"Despite some tests and difficulties, the China-India relationship continues to grow…The Chinese dragon and Indian elephant must not fight each other but dance with each other,” he said. "If China and India are united, one plus one will become eleven instead of two."

Wang Yi, was skeptical about the narrative pertaining to the term "Indo-Pacific" (China has been more comfortable with "Asia Pacific", and the Quad alliance comprising US, Japan, Australia and India).

The Chinese foreign minister dubbed it as "like the foam on the sea". 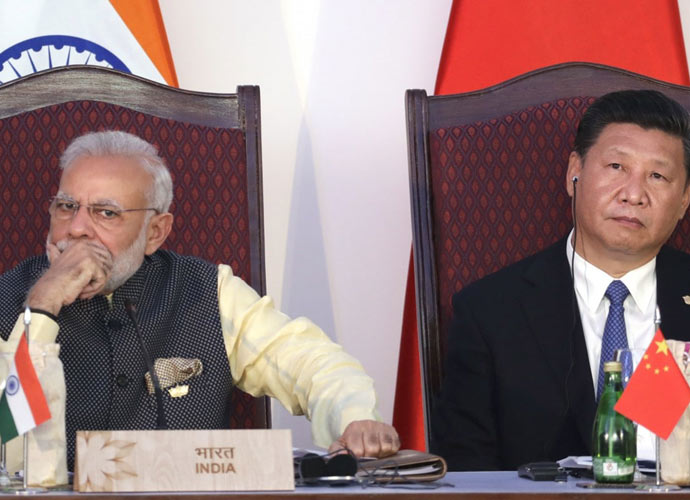 While stating, that such an alliance (Quad) was not in sync with geo-political realities of the times, Wang Yi said he would go by the members of the alliance who said that it is not meant to target any one country (China).

Indian foreign ministry spokesperson, Raveesh Kumar, echoed Wang Yi’s views saying that India was keen to explore commonalities between both countries, rather than focusing on disputes.

"We are willing to work with the Chinese side to develop our relations based on commonalities, while dealing with differences on the basis of mutual respect and sensitivity to each other’s interests, concerns and aspirations," said Kumar.

What is interesting to note is that in spite of the Doklam stand-off, differences over issues like the China Pakistan Economic Corridor (CPEC), China’s continuous blocking of efforts to declare JeM leader Masood Azhar as a global terrorist at the UN, trade between the two countries went up to reach $84.44 billion USD in 2017 (an 18 per cent rise from the previous year).

Interestingly, after the Doklam stand-off, a number of organisations had spoken vociferously in favour of boycotting Chinese goods. The government did impose anti-dumping duties on as many as 98 commodities which included certain fibres and chemicals along with a number of other commodities, as was stated in a response by the minister of state for commerce and industry, CR Chaudhary, to the Rajya Sabha. The Indian government, however, realised that the narrative with regard to boycott of Chinese goods was not a pragmatic decision.

While the Chinese foreign minister’s statements and bilateral trade figures are interesting, given the ultra-nationalist narrative which had emerged last year after tensions between the two neighbours, what has also drawn the attention of the strategic community in general and China watchers in particular, is a circular issued by India’s foreign secretary Vijay Gokhale not to attend events being organised to commemorate 60 years of the Dalai Lama in India. As a result, the Tibetan government-in-exile has shifted the event from Delhi to Dharamsala.

"We have lived in India for 60 years and would like to express our gratitude. But we also understand India’s position. We took relevant note of reports and decided that it would be best if we just rescheduled to event," said Sonam Dagpo, the exiled government's spokesperson.

Gokhale issued this circular before he departed for his first visit to China (February 23-24), and while some have criticised this move, others feel it is a pragmatic decision and is driven by India’s national interest.

During the visit it was decided to address all contentious issues through increased engagement. Commenting on the outcome of the foreign secretary’s visit during which Gokhale met Chinese vice-foreign minister Kong Xuanyou and foreign minister Wang Yi, a statement issued by the Ministry of External Affairs (government of India) stated:

"Both sides agreed upon the need to expedite various dialogue mechanisms in order to promote multifaceted cooperation across diverse fields of India-China engagement."

Some high level interactions are likely to take place over the next few months. April 2018 will witness the China-India strategic economic dialogue. While Chinese commerce minister Zhong Shan or his deputy will attend a ministerial meeting organised by India’s commerce ministry to discuss WTO related issues,  Guo Yezhou, vice minister in the International Department of the Communist Party of China (CPC), will also be visiting India.

Apart from Gokhale’s circular, it was also interesting to see that China which was initially unwilling to support a US-led motion, for putting Pakistan on the grey-list of Financial Action Task Force (FATF)  an international financial watch dog (which seeks to combat money-laundering and terror-financing),  finally giving in. India’s support for China’s bid for vice-presidency of the organisation did the trick. Interestingly, the US had wanted to support Japan for the same position.

What is this recent thaw driven by?

From the Indian point of view, a better relationship with China helps because New Delhi can pressurise Beijing to push Pakistan to act against terror groups like JuD, and LeT. While the US too has been telling Islamabad to do more against terror groups targeting India, China given its massive investments in Pakistan has great leverage.

If one were to look at the bilateral context, New Delhi should explore Chinese investments. While states like Gujarat, Andhra Pradesh and Maharashtra have established strong links, it is time that other states in eastern India such as West Bengal and Odisha too join in.

Chinese presence at the recent investors' summit, organised by the West Bengal government is a clear indicator. They have also extended an invitation to chief minister Mamata Banerjee to visit China

On both issues, US president Donald Trump had some harsh words for India and China.

Commeting on his withdrawal from the Paris Climate Agreement and how it’s unfair to the US, Trump said: "...countries like India, China and others, we had to pay, because they (agreement) considered them a growing country. But the United States? We're developed. We can pay."

On February 26, while addressing governors from various US states, Trump stated that the US did not benefit from the slashing of customs duties, on high end motorcyles (Harley Davidson), to 50 per cent and India was doing no favour to the US.

The US president also referred to a telephonic conversation he had with the Indian PM, Narendra Modi , on foreign policy and ties between the countries need to be viewed in shades of grey and cannot be looked at from a zero-sum approach. And both New Delhi and Beijing realise the same.

Leaderships of both countries have repeatedly spoken about working jointly towards making the 21st century the "Asian Century". There will be divergences, between both countries, especially in the context of Chinese presence in the neighborhood. Talk of jointly working for an "Asian Century" may seem far-fetched and both countries would be advised to adopt a more realistic approach driven by future economic goals, rather than historical baggage of the past.

#Economy, #Xi Jinping, #Modi, #India-China Ties
The views and opinions expressed in this article are those of the authors and do not necessarily reflect the official policy or position of DailyO.in or the India Today Group. The writers are solely responsible for any claims arising out of the contents of this article.