Beijing has been angered by New Delhi's gradual acceptance into the nuclear mainstream.

If the United States backing India’s membership to the elite Nuclear Suppliers Group (NSG) last week was an encouraging sign for New Delhi ahead of next month’s plenary, a rather considerable Chinese wall still stands in the way.

That was made clear in clear terms on May 16, when Beijing declared its view that it was "a compulsory standard" of the NSG, a body that governs nuclear trade, that "members must be signatory states to the Nuclear Non-Proliferation Treaty (NPT)".

This followed a May 13 statement from Washington that reiterated its support to India’s membership to the group. This was first voiced during US president Barack Obama's 2015 visit, when he said it was the US view that India was ready for membership. 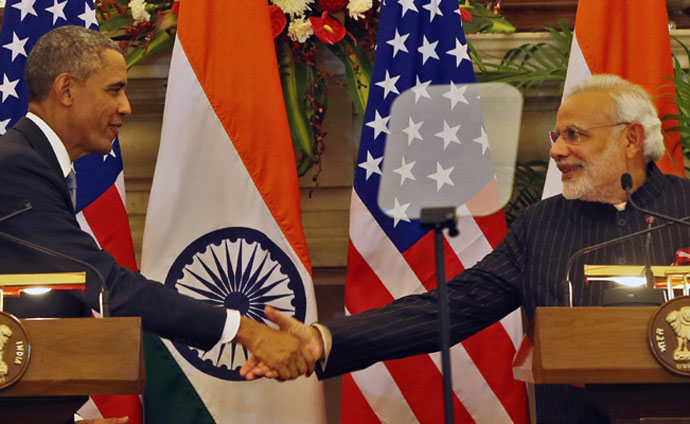 During Barack Obama's 2015 visit, he said US was of the view that India was ready for membership.

The group will hold a plenary session in June, during which it is expected to consider India’s application.

But China on May 16 spelled out in no uncertain terms that a rather considerable Chinese wall still stands in the way.

"The Nuclear Suppliers Group has made serious political and technical standards wth regard to accepting new members and one compulsory standard is that NSG members must be signatory states to the NPT," foreign ministry spokesperson Hong Lei said at a regular press briefing in Beijing.

"This is a consensus that has long been upheld by the international community and was also reaffirmed in last year’s non-proliferation treaty review session. All multilateral non-proliferation regimes including the NSG all take the NPT membership as a requirement to accept new members."

Hong was careful to point out that such a position "targets no particular country" and "this position applies to all non-NPT countries".

Yet it has been no secret that Beijing has been angered by India’s gradual acceptance into the nuclear mainstream, starting with the civilian nuclear deal with the US that was made possible by a waiver granted by the NSG - one that Beijing opposed until the last minute.

That waiver, however, also triggered a renewed effort by Beijing to support Pakistan with exports of nuclear reactors, despite its non-NPT status. The NSG bars transfer of technology to non-NPT countries.

Beijing’s message was if the US could seek an exception, it would not only do the same, but bypass the group entirely and do away with the pretence of seeking a formal waiver.

While China did not seek a waiver as the US did, Beijing told the NSG that its deal with Pakistan was under International Atomic Energy Agency safeguards and that the sale of three reactors was actually "grandfathered" under an earlier deal that predated its commitments as a member of the NSG.

Despite the fact that few NSG members have found that argument credible - the deal for the fifth reactor, in fact, involved technology that was non-existent at the time China and Pakistan signed their first deal - neither the US nor other members pressed China on the agreements.

Now, China has taken its argument against India’s membership a step further, linking it to Pakistan’s aspirations to join the NSG. Beijing pointed out in 2015 that as it did with India, it noted Pakistan’s "aspirations" for membership.

Yet it also added that "Pakistan has taken steps towards its mainstreaming into the global non-proliferation regime". Given the history of Pakistan’s proliferation record, few others may find that argument convincing.

#Pakistan, #India-China Ties, #Nuclear Weapons
The views and opinions expressed in this article are those of the authors and do not necessarily reflect the official policy or position of DailyO.in or the India Today Group. The writers are solely responsible for any claims arising out of the contents of this article.