How flawed is India's foreign policy that China is threatening war with us?

The country's refusal to budge over Doklam has forced the Modi regime to give up its swagger and desperately look for a face-saving exit.

For nearly a month now, China and India’s border dispute at Doklam in the Sikkim section has been threatening to lead to a full-scale war. The war cry from the Chinese official media is no less virulent than what Pakistan has received from the nationalist Indian media for the last two years.

Chinese commentators argue that India’s support to Bhutan provides legitimacy to China to support Pakistan in Kashmir. That position has pleased Pakistan no end and the Kashmir issue threatens to go out of India’s long-preserved strategy of confining it as a bilateral matter.

The prolonged military standoff also helps cash-rich China to prioritise infrastructure development on its Indian border region. That raises the distinct possibility of expediting the process of Nepal, Bhutan and Bangladesh moving closer to China and diminishing India’s influence in its neighborhood further.

In spite of China’s repeated threats, the Indian government is trying to underplay its seriousness. The usual blusters of India’s present Army Chief have disappeared in the last few weeks.

Only in the beginning of June, General Bipin Rawat was boasting that India was ready for “two-and-a-half front war” (Pakistan, China and internal security threats). In the first few days of the standoff, while responding to China’s warning, India’s part-time defence minister was even cockier: "The situation in 1962 was different and India of 2017 is different."

But, China’s refusal to budge has forced the Modi regime to give up its swagger and desperately look for a face-saving exit.

Confident China has not gone for any troop movement yet in spite of the fact that Indian soldiers are present in larger numbers close to the epicentre of the present standoff. What has rattled the Indian side, the media, strategic analysts and the regime itself is that China has been openly aggressive and repeatedly threatening military action.

Exactly 30 years ago, a war-like situation had emerged between two neighbours and that was primarily due to the belligerent adventurism of General Krishnaswamy Sundarji.

In 2017, the Indian Army is led by a similar chest-thumping General Bipin Rawat, but in the present standoff with China, the role of General Rawat is peripheral. What has now enabled China to openly and humiliatingly threaten India is Narendra Modi’s disastrous foreign policy.

It is true that China is an established superpower now, not just a rising one. After becoming more powerful economically, since 2008, it is not at least anymore hesitant to exert its political and military power.

However, since 1962, while China had no doubt ever about its superior military strength vis-à-vis India, what had restrained it before was India’s smart management of bilateral relations not only with Russia and the US, but with China itself. 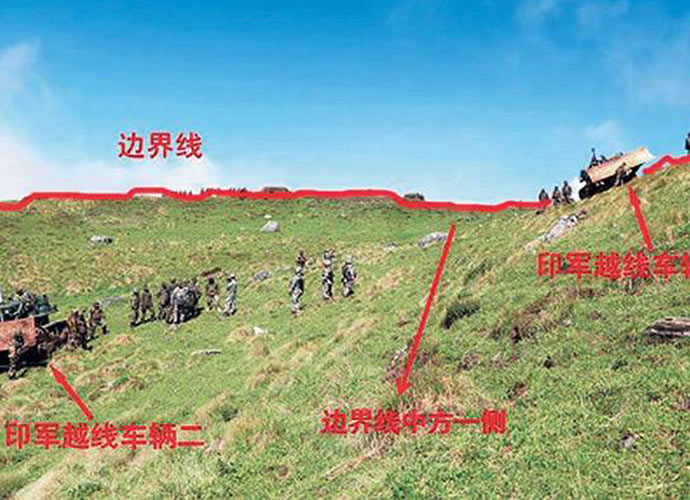 Whatever India’s so-called strategic experts claim, China does not need India as much as India needs China for its economic growth, water and energy security and to be a member of various global power clubs.

Since Rajiv Gandhi’s three-minute handshake with Chinese leader Deng Xiaoping in December 1988 in Beijing, India’s policy in general was to develop a mutually beneficial relationship with China through regular high-level dialogues and expanding economic and commercial ties.

However, since coming to power in May 2014, Modi has not left any opportunity to irritate China. He invited the PM of the Tibetan government in exile to his inauguration. He even directly criticised China when he went to Japan in September 2014. Inviting the American ambassador and the Dalai Lama to visit Arunachal Pradesh were nothing but narrow-minded steps in that direction.

Modi’s party (BJP) colleagues time to time have been openly calling for boycotting of Chinese goods. The decision to boycott the formal launch of Chinese president Xi Jinping’s pet project One Belt One Road (OBOR) in May 2017 in Beijing was the worst of all.

It clearly exposed that Modi’s foreign policy has isolated India in South Asia and in the world. Even usually considered pro-India regimes in the neighbourhood, Bangladesh, Nepal and Sri Lanka were forced to come out of their strategic ambiguity and openly side with China. With Pakistan’s friendship in its pocket, China has now virtually surrounded India with its allies.

In spite of the Modi regime’s series of provocations in 2014 and 2015, China had some hope that he would continue former PM Manmohan Singh’s policy of balancing ties between the US and China. But that was not to be.

For over a decade, India had been resisting the allure of turning into an American ally due to changing global politics. But Modi ignored the geo-strategic reality and wholeheartedly became a US ally in the assumption that it will put Delhi in a stronger position vis-à-vis Beijing.

In April 2016, Modi signed the Logistics Exchange Memorandum of Agreement (LEMOA) with the US, which destroyed the bedrock of India’s foreign policy of 70 years. It allows American fighter planes and war ships to use India’s facilities, bringing them closer to China’s southern border.

Signing of the LEMOA and increased cooperation with the US Navy in patrolling the Indian Ocean have not made India any stronger, rather it has brought Russia and Pakistan closer to China.

Making matters worse, India is not important in the new and volatile Donald Trump administration’s scheme of things. By placing all eggs in the American basket, Modi has pushed India into a very difficult situation. While the US shows no sign of siding with India to confront China, India has lost the trust and assured support of an old and reliable friend like Russia.

Whether anyone likes it or not, China is already a serious global power. While India’s GDP in 2016 was $2.5 trillion, China’s GDP has reached $11.4 trillion. India’s hawkish media prefers to forget China’s overwhelming military superiority - while India’s military spending in 2016 was $55.9 billion, China spent $215 billion.

Taking a sweeping adversarial approach, Modi has done whatever it can to infuriate China for long. Doklam has provided the neighbouring country an opportunity to retaliate.

China’s regular war cries are to show off its military superiority vis-à-vis an increasingly lonely India. India is suffering this humiliation and for this no one but Narendra Modi’s flawed foreign policy is responsible. The only solace is that China seems not in a hurry to take any military action.

#Doklam, #Foreign policy, #Pakistan, #India-China Ties
The views and opinions expressed in this article are those of the authors and do not necessarily reflect the official policy or position of DailyO.in or the India Today Group. The writers are solely responsible for any claims arising out of the contents of this article.