It's time Tel Aviv gets the recognition it deserves from New Delhi.

And it is anticipated that in a historic first, Prime Minister Narendra Modi will visit Israel in January 2017 to mark the 25th anniversary of the establishment of diplomatic relations between the two countries.

He will become the first prime minister of India to visit the country. Modi had visited Israel as chief minister of Gujarat in 2006.

And as prime minister, he had met his Israeli counterpart, Benjamin Netanyahu, on the sidelines of the UN General Assembly's annual session last year.

A hallmark of Modi's foreign policy has been a self-confident assertion of Indian interests. This is reflected in his government's moves vis-à-vis Israel, marking a distinct break from unnecessary and counterproductive diffidence of the past.

Despite sharing more than two decades of diplomatic ties and working closely on defence, counterterrorism, agriculture and energy-related issues, no Indian prime minister has ever visited Israel.

When it comes to India's Israel policy, hypocrisy has been the norm. In 2014, Israel's actions in Gaza were deemed so unacceptable by Indian parliamentarians that all perspective was lost.

Calling for suspension of military purchases from Israel, the CPI(M)'s Sitaram Yechury had suggested that "India cannot be a party to this genocide."

Leader of the Opposition Ghulam Nabi Azad demanded that the Rajya Sabha pass a resolution condemning the attacks and hit out at the government saying it was regrettable that New Delhi did not raise its voice against the "massacre".

Ahmed Hassan of the Trinamool Congress wanted India to raise the issue at the United Nations, and CPI's D Raja called for a "categorical stand condemning Israel". 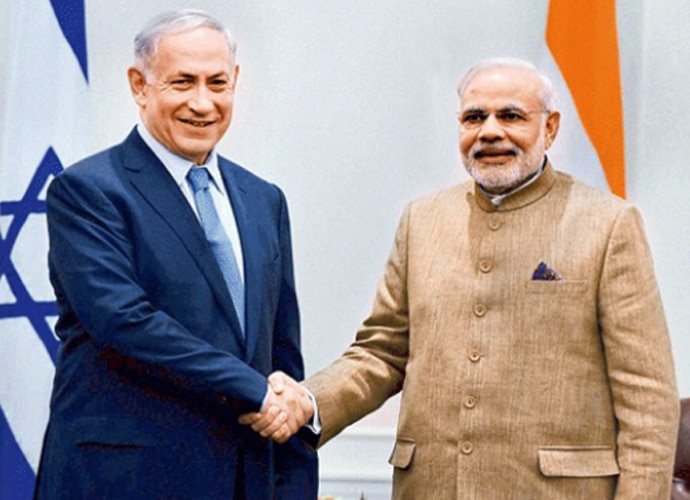 Despite representing a nation that is one of the biggest victims of crossborder terrorism in the world, our esteemed members of Parliament have had no compunction in equating the actions of a liberal democratic Israel with the murderous extremism of a terrorist organisation such as Hamas.

Couched in the humanitarian concern for the plight of Gaza residents, the Opposition did its best to play to the gallery, insinuating that because of the BJP government religious motives cannot be far behind.

In her reply, external affairs minister Sushma Swaraj did well to remind her Opposition colleagues that India's relations with Palestine and Israel were a legacy of previous governments, including the Congress-led UPA government of the recent past.

There has been a steady strengthening of India's relationship with Israel ever since the two nations established full diplomatic relations in 1992.

It is a tribute to PV Narasimha Rao's foresight that he was able to lay the basis of India-Israeli partnership.

In contrast to the backchannel security ties that existed before the normalisation of bilateral relations, India has been more willing in recent years to carve out a mutually beneficial bilateral relationship with Israel, including deepening military ties and countering the threat terrorism poses to the two societies.

Over the years, the Indian government has toned down its reactions to Israel's treatment of the Palestinians.

This reevaluation has been based on a realisation that India's largely pro-Arab stance in West Asia has not been adequately rewarded by the Arab world.

India has received no worthwhile backing from the Arab countries in the resolution of problems it faces in its neighbourhood, especially Kashmir.

There have been no serious attempts by the Arab world to put pressure on Pakistan to reign in crossborder terrorism in Kashmir.

On the contrary, the Arab nations have firmly stood by Pakistan, using the Organisation of Islamic Conference to build support for Islamabad and the jihadi groups in Kashmir.

If Arab nations, such as Jordan, have been able to keep their traditional ties with Palestine intact while building a new relationship with Israel, there is no reason for India not to take a similar route.

Keeping India's wider strategic interests in perspective, successive Indian governments since the early 1990s have walked a nuanced line between expressing genuine concern for the Palestinian cause and expanding its commercial and defence ties with Israel.

India is the world's largest buyer of Israeli weaponry and was Israel's third largest trading partner in Asia in 2013, just after China and Hong Kong.

The domestic political milieu continues to exert its substantial influence on the trajectory of India-Israel relations.

Israel has been a good friend of India but Delhi continues to be shy of demonstrating its friendship. At crucial times, when India needed Israeli help, it got it unreservedly.

Israel was willing to continue and even step up its arms sales to India after other major countries curbed their technological exports following India's May 1998 nuclear tests.

Israel provided India with much-needed imagery of Pakistani positions using its UAVs during the Kargil War in 1999.

When India was planning to undertake a limited military strike against Pakistan in June 2002 as part of "Operation Parakram", Israel supplied hardware through special planes.

The terrorism that both India and Israel face comes not only from disaffected groups within their territories; it is also aided and abetted by neighbouring states, increasingly capable of transferring weapons of mass destruction to terrorist organisations.

And yet previous governments had been reticent in acknowledging Israel's partnership. In diplomacy, public affirmation of friendships at the highest levels is often as important as drawing red lines for adversaries.

The Modi government is doing well by repudiating the discredited Israel policy of its predecessors.

An open relationship with Israel serves India well and it's time Tel Aviv gets the recognition it deserves from New Delhi.

#Narendra Modi, #India-Israel ties
The views and opinions expressed in this article are those of the authors and do not necessarily reflect the official policy or position of DailyO.in or the India Today Group. The writers are solely responsible for any claims arising out of the contents of this article.