What are the odds of India's nuclear first strike against Pakistan?

Atomic stuff is exotic and esoteric but at the end of the day, certain universal rules still apply.

Forget a nuclear winter setting in as a result of an India-Pakistan atomic exchange anytime soon, instead we find ourselves in the middle of a nuclear summer, as "The Gray Lady" is the latest entity to hot up the Great NFU debate.

Although, why we are debating whether India is abandoning its policy of no first use of nuclear weapons at this juncture is extremely puzzling.

The NYT piece quotes "circumstantial evidence" in the form of a "triad" of statements — by former NSA Shiv Shankar Menon, a retired head of India's Strategic Forces Command (SFC), Lt Gen BS Nagal, and then defence minister Parrikar — as the trigger.

But how is any of this new? The key provocateur in the latest rerun of this debate, Vipin Narang of MIT, had already highlighted this triad in November 2016, so what has changed since then except a high-profile think tank event that needed some radioactive grist so as not to appear run of the mill?

But why would Indian planners regard these as mutually exclusive in the first place, especially when the doctrine is centered around massive retaliation? 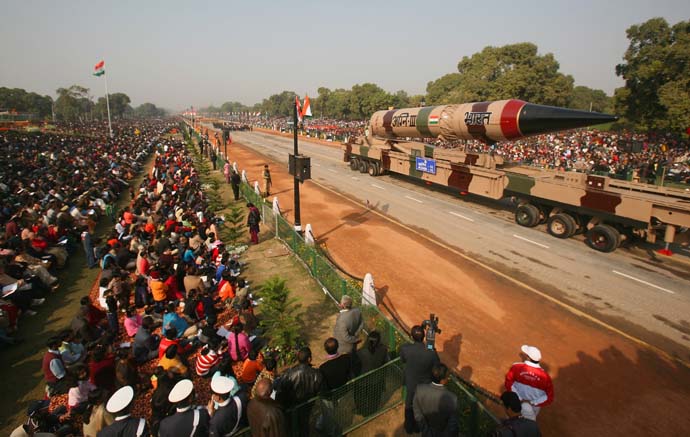 If we think a first strike will neutralise all Pakistani nuclear strike capability, that's just a chimera. Photo: Reuters

Moreover, the Indian doctrine goes further than even ambiguous US threats in Desert Storm by promising nuclear retaliation for biological and chemical weapon attacks.

The enemy's chemical and biological weapon facilities — which in this context fall under a counterforce definition — have always been in the cross hairs.

Also, is Rawalpindi — home to Pakistan Army's general headquarters as also millions of civilians — a counterforce target or a countervalue target? What about Karachi?

Pakistan's most populous city is also a base for its submarines, now supposedly armed with cruise missiles with nuclear warheads, giving them a nascent second-strike capability.

Counterforce versus countervalue distinctions only go so far, and the lines blur frequently.

Coming back to the triad of statements, let's consider Parrikar's. His maverick pronouncements on NFU led to his own ministry immediately distancing itself from them. This is a man who once said India must "neutralise terrorist through terrorist", but we didn't see counter-terrorism experts confirming the return of CIT-X and CIT-J as an instrument of the Indian policy.

Why then should his nuclear pronouncements be taken seriously?

How are Lt Gen Nagal's strong words suggesting that an NFU posture was somehow "morally wrong" proof that India is shifting to a first-use posture?

If anything, his angst seems to suggest status quo, why else would he be channelling his inner Sundarji and advocating a change of what he perceives is a flawed policy.

Primarily, extracts from Shiv Shankar Menon's book have been cited as the most credible evidence of a change in status quo.

Narang offers Menon's statement that "Pakistani tactical nuclear weapons use [or imminent use] would effectively free India to undertake a comprehensive first strike against Pakistan" as the clincher.

Unfortunately, he is mixing up Rules of Engagement (ROE) that exist at the tactical level with a shift in doctrine.

Menon's statement on "imminent use" is consistent with a positive indication of hostile intent.

"Do Not Fire Until Fired Upon" is a Hollywood catchphrase and does not apply to real world ROE, which almost always prioritises intent over action. Look no further than the US Navy's shootdown of Libyan Mig-23s in 1989 that it is a standard practice to be the first to fire if "hostile intent" is assessed and self-defence becomes the priority.

Yes, nuke stuff is exotic and esoteric but it's still warfare at the end of the day and certain universal rules still apply.

Regardless, if we think a first strike will neutralise all Pakistani nuclear strike capability, that's just a chimera.

For India to adopt a Pakistani version of a nuclear first strike — a nuclear response to an overwhelming conventional attack — makes little sense given the respective military capabilities of the two nations.

None of this is to say that a greater debate about India's nuclear weapons posture isn't required. In fact, there is an overwhelming need for it; but I daresay on more vexing issues.

Also read: India-Pakistan tensions and the threat of nuclear war

#Pakistan, #India-Pak, #India-Pakistan war
The views and opinions expressed in this article are those of the authors and do not necessarily reflect the official policy or position of DailyO.in or the India Today Group. The writers are solely responsible for any claims arising out of the contents of this article.

The writer has a background in simulation and wargaming and contributes on military affairs to media websites as well as his podcast Armchair Generals on YouTube.