Modi will be facing the Lok Sabha election in two years from now. The office of the president is called upon to play an important role in case of a hung Parliament.

The Bharatiya Janata Party's (BJP's) talk of building a consensus on the presidential candidate is a trap the opposition parties must avoid. It's hogwash and the Opposition mustn't take the bait.

The BJP is working on a script. The party is talking about evolving a consensus to sow confusion in the Opposition's ranks.

Its strategy is to claim high moral ground later and say the BJP tried for a consensus on a non-controversial issue - for the highest office of the president in the land - but the Opposition parties didn't rise to the occasion.

Though the BJP, with its NDA partners, has the requisite number in the electoral college to elect the president of its choice, a divided Opposition will ensure smooth sailing.

Instead, they asked Sonia Gandhi to suggest a name. The Congress' reaction was apt. How can we ensure support in the absence of a name, said senior Congress leader Ghulam Nabi Azad? 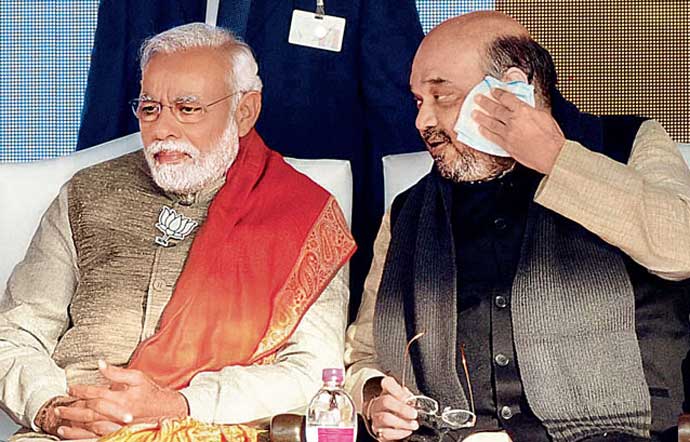 The names suggested by the BJP can't be of those associated with the RSS and Hindutva politics and the past: no compromise on this score.

Leader of the party in the Lok Sabha, Mallikarjun Kharge quipped: "When they have not given any names, there is no question of consensus."

However, the BJP's charade of building a consensus will continue for a few days, until the time of filing nomination papers.

Opposition leaders must understand the BJP's game plan. They would do well to tell the BJP that the consensus can be reached on three conditions.

Firstly, the candidate for the office of the next president must be from the Opposition's panel of names but acceptable to the ruling party.

Of course, the likely names can't be of any controversial personalities. And there can be any number of eminent men and women acceptable to both the ruling and Opposition parties.

Secondly, the names suggested by the BJP can't be of those associated with the RSS and Hindutva politics and the past: no compromise on this score.

And thirdly, the BJP and the government must also agree that the consensus can't remain confined to the election of president only. Politics of consensus must extend to major national and foreign policy issues.

Nonetheless, the government has to be made aware that the nation is crying out for consensus-driven politics.

There is a need for consensus in the political life today to calm the atmosphere in the country and to reassure the people that the nation is not precipitately hurtling down a catastrophic path.

Failing the three conditions, it would serve the Opposition's interest and the national interest well to reject the rhetoric of consensus and brace up for a fight.

Contest yes, consensus no if it's restricted to the election of the president. That's a preferable strategy for the Opposition.

BJP's talk of consensus in the existing atmosphere is like asking the Opposition to fetch water from the well after having put the house on fire.

The country is indeed on fire. And the sole blame for putting the nation on fire lies with the BJP and the government headed by Prime Minister Narendra Modi.

Falling for consensus would amount to shutting one's eyes to the BJP's culpability, to acquiesce in their wrongdoings.

It would mean having forgotten and forgiven the three years of omissions and commissions on part of the government.

The Left and the RJD have rightly said that supporting NDA's candidate on the pretext of a consensus would imply a compromise with the BJP's divisive ideology.

The fact is that the formation of a three-member committee of Singh, Naidu and Arun Jaitley by BJP president Amit Shah was hurriedly announced to preempt the nine-member Opposition group from intensifying their consultations over the choice of a presidential candidate.

It certainly is a ploy to divide the Opposition. There can be various ways to create confusion and division. Region, religion, caste, language, tribal, Dalit and political ideologies can influence parties' preferences.

For instance, Biju Janata Dal (BJD) will support Draupadi Murmu, the Jharkhand governor who is a Scheduled Tribe leader from Orissa, if BJP decides to put her up as a candidate.

Likewise, the Shiv Sena might break rank with the BJP if the Opposition chose a Maharashtrian not totally inimical to the Sena's politics. Political parties have tendencies to fall for symbolism and tokenism on issues that appeal to parochial and regional concerns.

The office of the president has constitutional bindings to go by the decision of the council of the minsters. The Constitution doesn't allow for an activist president.

Yet, ruling parties choose to have what's called a rubber stamp president in the office. The Modi dispensation would prefer it more so because of its brand of politics. Any person of eminence in public life and with a conscience would like to keep a distance from the politics currently being practised.

There are two factors that Modi and Shah will have uppermost in mind in their choice of the presidential candidate. Firstly, the government may have in mind certain controversial legislations, which would require a rubber stamp president in the office.

Secondly, Modi will be facing the Lok Sabha election in two years from now. The office of the president is called upon to play an important role in case of a hung Parliament.

Therefore, there is no case for a consensus candidate from the BJP's perspective. Which leaves the combined Opposition with no choice for consensus either.

Also read: Hindu Rashtra conclave in Goa will do for Modi govt what Babri-Ram Temple conflict did for BJP

#Modi government, #Congress, #BJP, #2017 Presidential Elections
The views and opinions expressed in this article are those of the authors and do not necessarily reflect the official policy or position of DailyO.in or the India Today Group. The writers are solely responsible for any claims arising out of the contents of this article.