The two nations have agreed to work together keeping each other’s concerns in mind after talks between PM Modi and visiting president Danny Faure.

While visits by heads of states and governments are not new to the diplomatic corridors of Delhi, the visit of Seychelles President Danny Antoine Rollen Faure has grabbed a lot of eyeballs. The reason being the hanging fate of India’s joint military base at the Assumption Island. While the discussions do not seem to have materialised as far as the Assumption Island is concerned, the larger ambit of India-Seychelles ties has only grown in stature.

Prime Minister Narendra Modi as part of his Indian Ocean sojourn visited the island nation of Seychelles in March 2015. As an outcome of the delegation-level talks led by PM Modi and the then president of Seychelles, James Michel, both governments reached an agreement to enhance infrastructural facilities at the Assumption Island. A coastal surveillance radar system was installed by the Indian government in 2016. 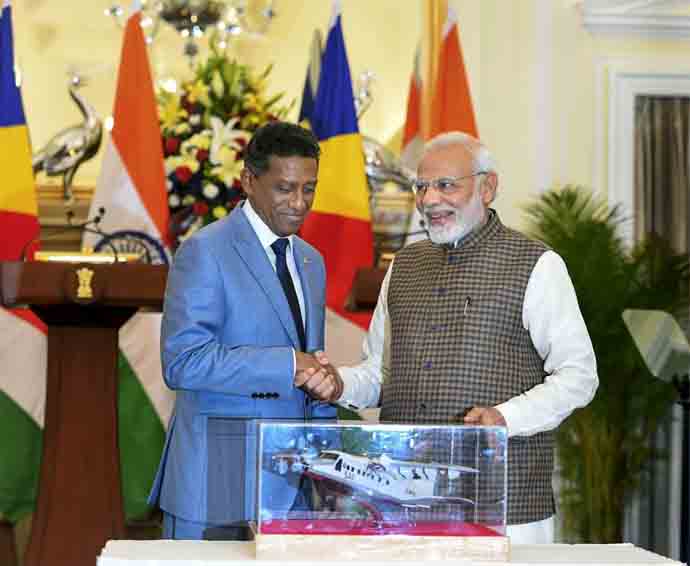 Significance of the joint military base

Assumption Island is located in the outer group of the 115 islands that make up the boundary of Seychelles, lying north of Madagascar. A joint military build-up would have been in the region’s larger geo-strategic interest and in countering the growing menace of piracy off the Mozambique coast, which is also the most important channel for trade destined for and from the Indian Ocean.

However, disappointments did not plague the visit and enough warmth could be seen among the two premiers.

Following the review of the wide-ranging cooperation between the countries on issues of defence and strategic partnership, PM Modi announced a $100 million line of credit for the government of Seychelles. This credit being extended by the Indian establishment could be used by the Seychelles government to enhance its military and naval capacity by using it for the purchase of defence equipment from India.

A Dornier maritime reconnaissance aircraft was also handed over by PM Modi to the visiting president. The Dornier aircraft is a second-of-its-kind machine to be gifted by the Indian establishment to help Seychelles in monitoring its 1.3 million sq km of Exclusive Economic Zone. The machine is a state-of-the-art aircraft which has the ability to detect any movements on the surface of the sea with enough capacity to apprise the operators of the size of the fleet moving on the surface. In some cases, the aircraft has also been able to decipher ship-to-ship transmissions.

EAM @SushmaSwaraj hands over #Dornier Do 228 aircraft made by #HAL to President of Seychelles Danny Antoine Rollen Faure pic.twitter.com/lQxACITsBh

Addressing the Shangri-La dialogue earlier this month in Singapore PM Modi had reiterated his commitment to build economic and military capabilities of India’s friends and partners to ensure the collective security of the region.

The military and naval assistance being rendered to Seychelles is in furtherance to the Indian government’s efforts to ensure free, open and inclusive Indian Ocean Region which has been recapitulated in its policy of Security and Growth for All in the Region (SAGAR). By engaging all stakeholders and littoral nations of the region, the Indian government is trying to promote safe and inclusive growth across the waters of the ocean. At the same time, the government is also cautious of China’s presence at Hambantota in Sri Lanka and Gwadar in Pakistan. China is alleged to have been building a "string of pearls" around the Indian peninsula to beat the Malacca Dilemma in case of India’s growing leadership and influence in the region.

Much like the ambit of this bilateral relationship, the assistance extended by the Indian government to strengthen Seychelles’ defence capabilities too was wide-ranging. Capacity building was not restricted to technical and infrastructure fronts only, but also included an agreement on the technical training of both civilian and defence personnel of Seychelles to increase its human development capacity. Indian specialists will also be sent on deputation to render their assistance and expertise in the successful implementation of Seychelles’ National Development Projects.

Historian, diplomat and professor KM Pannikar had said: "The future of India will undoubtedly be decided on the sea. It is indissolubly connected with developments in the Indian Ocean." The present scenario building up around the shores of the ocean is proving his words to be true. The future of the entire region is being decided by the ripples of the ocean and the Indian government is leaving no stone unturned in ensuring that the tides are nothing but favourable.

Also read: How China is expanding its military capabilities across the globe

#Modi, #China, #Indian Ocean, #India-seychelles ties
The views and opinions expressed in this article are those of the authors and do not necessarily reflect the official policy or position of DailyO.in or the India Today Group. The writers are solely responsible for any claims arising out of the contents of this article.

Deeksha Goel is a Senior Research Fellow at India Foundation.