Troll Bhai, modernise! Mimi and Nusrat being trolled for Western clothes and selfies in Parliament shows our critics are just not with it!

Welcome to a world where ‘jeans and pants’ are the new evil and if you are wearing them, you’re apparently at a movie set. Even if you're an MP in Parliament.

We get it, trolls. Parliament is not a film set. If it were one though, it would definitely be one from the ‘80s, where kurta-pyjamas for men and plain sarees for women is the only acceptable attire. Since you trolls have nothing better do with your time, you targeted Mimi Chakraborty and Nusrat Jahan’s Instagram posts, where the newly elected MPs from Bengal can be seen posing for selfies in jeans and pants. 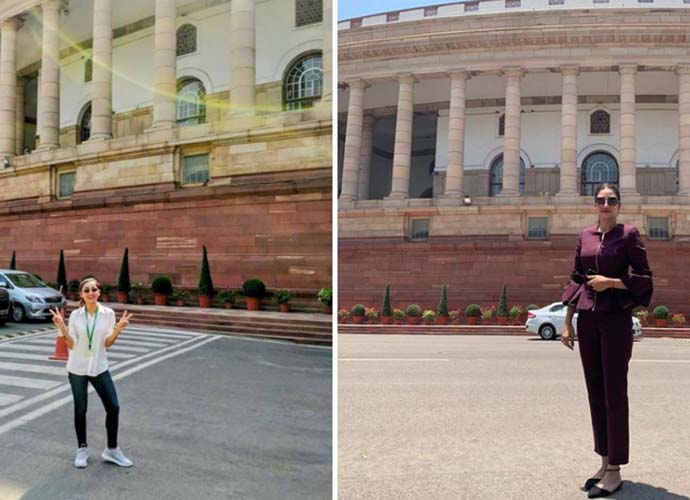 Go home, trolls, you're so past it: Mimi and Nusrat were trolled for clicking selfies. Well, welcome to 2019! (Source: Instagram)

Comments like ‘this is Parliament, not a movie set’ or ‘you’ve made a joke of the Parliament’ flooded our chambers online. I can’t help but ask the trolls now — how exactly do you expect two young, urban women to dress? Why do you expect them to don sarees or wear khadi and show up to Parliament totally muted? It’s not that women who do show up in sarees, like Smriti Irani or veteran politician Sushma Swaraj, shouldn’t do so. They are exercising their choice to wear whatever they want — and so should Mimi and Nusrat.

In case you trolls didn’t get the memo, most young, millennial women dress like Mimi and Nusrat did. Would you rather have the two women pretend to be something they aren’t, just to please your chauvinistic little instincts?

Oh, and what’s the problem with them posing and taking selfies? Believe you me, if I ever, EVER get to step into the Indian Parliament, I’ll be taking selfies at every nook and corner and Instagramming them! It looks like trolls don’t even know how millennials dress and ironically, many of them are millennials. I mean, if such reputed people as Parliamentarians are going to see one’s outfits, why can’t one dress to impress? If I, for one, ever step into Parliament, I’ll wear the most shiny and dapper outfit in my closet and slay those watching with my fashion sense!

And then, it’s not like a politician can hide all the corruption scandals, the failed policies, the heated bigotries and the lagging economic reforms behind a khadi outfit. I mean, there is only so much ignorance and selfishness that khadi can mask. 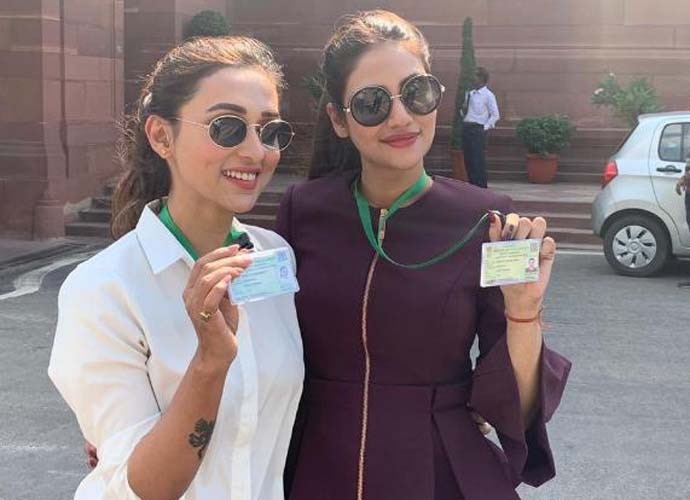 Truth be told, Mini and Nusrat were slaying in their uber cool outfits! (Source: Twitter)

Amidst all the chatter about clothes, let’s not forget that only 14% of Parliament seats are occupied by women MPs. In a day and age where we should encourage and empower the women who have made it to Parliament, we are bringing two of them down on their very first day. Not only are the trolls being sexist and misogynistic with such comments, they are also endorsing their regressive opinions on how women should dress — which, BTW, is none of their business.

Besides, our Parliament is the central site of our democratic freedom. If women cannot dress the way they want, even in Parliament, then it’s safe to say that we live in a highly regressive and deeply patriarchal society. Why can’t women wear what they’re comfortable with? Some women are comfortable in sarees, others in pants and jeans — and there’s space for both of them in our Parliament.

Yo trolls — you need to make some space in your tight little minds!

Meanwhile, kudos to Mimi and Nusrat for being themselves — and our congratulations for making it to Parliament!

Also Read: Pad Women of Daula! Meet the women of a small Haryana hamlet who are bringing about a menstrual hygiene revolution

Post your comment
#Mini and nusrat, #Women parliamentarians trolled, #Tmc women parliamentarians trolled, #Mini and nusrat trolled
The views and opinions expressed in this article are those of the authors and do not necessarily reflect the official policy or position of DailyO.in or the India Today Group. The writers are solely responsible for any claims arising out of the contents of this article.