The steely will of our warriors was evident - the radiant faces of our officers and their proud spouses made it clear we are winners.

It was a terrific moment, undoubtedly thrilling, and the excitement of singing the national anthem collectively was writ large on every face. Senior officers from all the three wings of the forces, their spouses, retired Air Marshals, Admirals and Generals stood tall in the lawns of the strongman of the skies, Air Chief Marshal Arup Raha, who had thrown a big reception to celebrate Air Force Day.

It was like the entire nation was singing national anthem in chorus at Raha’s home. I saw a billion Indians coming together in those lawns.

And how it began. A few minutes to six, almost everyone was taking pictures of Prime Minister Narendra Modi, engrossed in an an intense discussion - it looked from that distance - with Air Chief Marshal Raha. 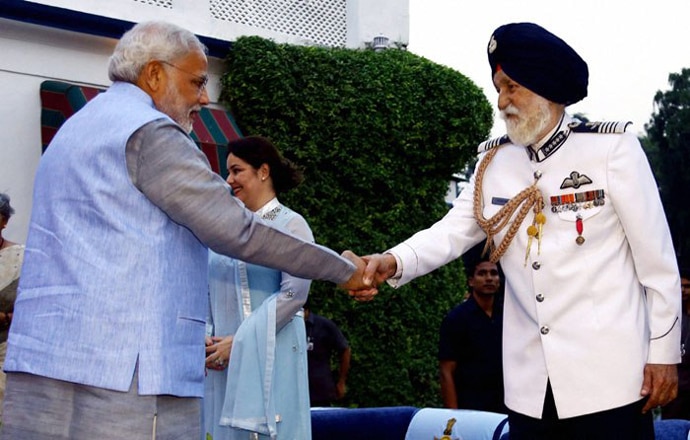 It's customary to play the national anthem when the President arrives. And at 6pm Pranab Da was ushered in and the Air Force band began playing Jana Gana Mana. Usually in such functions, guests stand in "attention" and the band plays on.

But here the difference was that the band was overwhelmed by the sounds of a thousand-plus distinguished guests, who were singing the national anthem aloud. And the most melodious voice came drifted into my ears from my left side. Three graceful women were singing as if they were in a trance. On another orbit: of patriotism and love for their nation.

Mesmerising was its impact on all of us, and my friend, Bhutan’s charming ambassador and his wife, standing with me, too were awestruck. The moment the national anthem ended, I couldn't resist and reached out to the three women to laud their rendition: "Bahut ache gaya, bahut achha. Dhanyavad," I said. They were delighted to receive the praise and said, but what's special about it? It's our national anthem and we MUST sing it. One of them was the wife of Air Marshal Bhatia and the other was Mrs Sareen, wife of another sky warrior Air Marshal Sareen (who belongs to my city, Dehradun).

I know there is nothing special or ecstatic about singing the national anthem. It's our duty and should come to us naturally. But when our own India mediapersons are seen as doubting the brave armed forces, when a leader from the opposition uses filthy words for the ruling party simply because they celebrated the Himmat and incisively sharp striking power of our boys, the national anthem sung collectively, looked to me as a fitting answer to all doubting Thomases.

Suddenly, I asked myself, why do we cherish the memories of Casablanca? A national flag and the young boy became a living anthem for his nation and its people.

I hope you remember the immortal lines:

Wasn’t he a fool, who gave his life defending a piece of cloth, standing fearlessly on the docks under the shadow of his country’s national flag? Who were Captian Vikram Batras, sq leader Ahluwalia, fighter pilot Squadron Leader Ajay Ahuja, and Captain Saurabh Kalia, who gave their best for a cause and their nation? And Group Captain Kambampati Nachiketa? And the legendary Marshal of the Indian Air Force Arjan Singh?

The national anthem is about all this.

The Air Warriors, as we rightly call our Indian Air Force personnel, have shown extraordinary grit and humane values under very trying circumstances. The documentary shown to us clearly announced that the results would have been different if IAF was used to its full potential during the 1962 Chinese aggression. The Air Warriors have shone brilliantly during any crisis - whether it was the Pakistani attack on Pooch in 1947, or Kargil or any natural disaster like the 2005 tsunami, Kedarnath tragedy or the Kashmir floods. They saved thousands of people in the rescue operations they undertook, not caring for their lives.

The togetherness during the singing of our national anthem was a tribute too to these Air Warriors.

What was so special when our soldiers fluttered the tricolour on top of Tololing during the Kargil war? They could have simply celebrated their victory with a glass of rum and that would have completed the story. The national anthem fills our heart with a rare thrill and pride. Why? Simply because we love our nation and we like to be associated with her victories and songs of glory. We have that deep connection, that relationship with this land that makes us feel great whenever we see a soldier and hear about their valour. It's this feeling that makes us wrap the bodies of our martyrs with tricolour and salute their memory. It is this relationship that makes us trust them - unquestioningly and with respect.

This trust is broken by those who have raised questions about our bravehearts' feat.

The steely will of our Air Warriors was evident - the radiant faces of our officers and their proud spouses made it clear - we are the winners.

The national anthem at the Air Chief’s home was a song of pride, invincible spirit, accomplishment and a big Shabash to our young heroes. Thank you to our Air Force for providing us the blissful moment.

#Air Force Day, #Indian Air Force
The views and opinions expressed in this article are those of the authors and do not necessarily reflect the official policy or position of DailyO.in or the India Today Group. The writers are solely responsible for any claims arising out of the contents of this article.