Indian Army’s use of civilian as human shield was illegal, but was it effective?

Rules of engagement for the armed forces are clear: First warn, then fire for impact.

The images of a man tied to the bonnet of a military jeep in Budgam on the day of polling in Srinagar have caused a massive furore. The video went viral on social media.

Here's the video of the Kashmiri boy tied to the front of an Army jeep and used as a human shield in Gundipora, Beerwah. @TimesNow? @NewsX? pic.twitter.com/wW2yns2RN3

Another video of CRPF personnel being kicked, punched, slapped and heckled by miscreants in the Kashmir Valley had already kicked up a storm. Soon another video surfaced where a security force personnel was seen firing into a stone-pelting mob, resulting in a fatal casualty.

General BS Jaswal, former Army commander, Northern Command, made it very clear that taking a human shield is illegal and a violation of laid down military procedure. The Army officer should have got out of his vehicle when the stone-pelting started, pulled out a weapon and fired a warning shot below the waist, and had the crowd not dispersed, fired again for effect.

The Army fires for effect. That would mean perhaps loss of life. Here what the Army official did was illegal and controversial, but was it effective? And did it also result in no loss of life? The Army has ordered an inquiry. 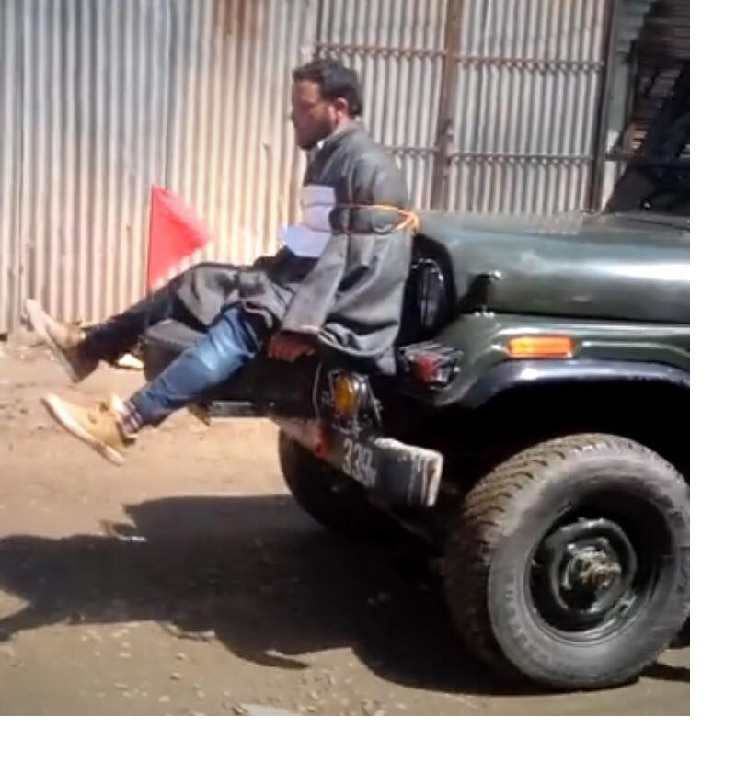 Images of a man tied to the bonnet of a military jeep in Budgam on the day of polling in Srinagar have caused a massive furore.

Some information that has filtered out through sources indicates that the Army was called in to the aid of a poll party. The military convoy that included a mine-protected vehicle, came in under heavy stone-pelting.

The aim was to get the polling officials and equipment to safety. The officer did have an option to open fire and disperse the crowd. He is in the line of fire for having chosen an illegal and controversial solution that some argue is effective in counter-insurgency operations.

I have been speaking to some young officers in the Valley. The rules of engagement are very clear. If there is a stone-pelting mob – issue a warning and then open fire. The Army brass says it wants the rank and file to follow standard operating procedure and not pursue illegal options even though they may save lives.

The audio clip also has the soldiers warning other stone-pelters that they would meet the same fate. The security forces do not want a repeat of 2016 post the killing of terrorist Burhan Wani.

The chief of the Army staff, General Bipin Rawat, recently made it very clear that stone-pelting operations to obstruct anti-terrorist operations would lead to the army taking hard action. Stone-pelters would be treated as overground workers of terrorist organisations.

Clearly, there is need for introspection by all sides. Stone-pelting cannot be justified under any circumstances. Those trying to do so are making a big mistake.

There is also little justification for the crisis post the killing of terrorist Burhan Wani. He was a gun-wielding terrorist of the Hizbul Mujahideen who wanted to establish an Islamic caliphate. He lived and was killed by the gun. His successors will also meet the same fate, unless they give up arms and join the mainstream.

It is time for the political parties in Kashmir to start calling a spade a spade – what is wrong is wrong. The same goes for the young soldier who used a human shield to save lives and get out of a difficult situation.

The Army disapproves of using people as a human shield. The nation was outraged by the images of CRPF personnel being heckled, kicked, punched, abused and slapped by a mob in Budgam.

Three miscreants have been identified and detained. The Jammu and Kashmir police have also filed an FIR to investigate the incident of an alleged stone-pelter being shot dead by security forces in Budgam.

For peace, one message needs to go out loud and clear. Stone-pelting is illegal, and must stop. Obstructing anti-terrorist operations will lead to hard military action. Rules of engagement must be followed by all stake-holders.

If not, the Valley is headed for another hot summer.

Post your comment
#Kashmir, #Indian Army
The views and opinions expressed in this article are those of the authors and do not necessarily reflect the official policy or position of DailyO.in or the India Today Group. The writers are solely responsible for any claims arising out of the contents of this article.