What 'innovations' does Army Chief Bipin Rawat have in mind for Kashmir?

Some political ingenuity can surely help.

So, the Indian Army wants people to be afraid of it! Because a sledgehammer policy, which shows scant regard for citizen's human rights, is the only way to grapple with the dirty proxy war in the Valley?

Brilliant! And this is the new strategy to wean away a people from militancy? To win their hearts?

Irony of ironies: the Army Chief shared this brilliant piece of insight even as hundreds of youth were taking an Army recruitment exam in Srinagar and Baramulla. These boys had trudged to the two Army centres despite threats from militants and a strike call by Hurriyat.

Some of us were juvenile enough to presume that the job of the Army was to instill confidence; all these years we were feeling rather smug in the belief that we are all safe under its watchful eye!

But what went wrong: we thought it was going to be just pebbles versus pellets in the Valley?

Did either side tire out: or did the Army run out of pellets? Or did the reverential fantasy of achieving durable peace run aground?

Anyhow, Army Chief General Bipin Rawat knows best what he is doing; he, of course, did not spell out what "innovative" devices he has in mind to quell the unrest on the streets, apart from defending the use of a human scarecrow by one Major Gogoi.

Perhaps, roads will be littered with glass shreds, so that toddlers can't step out of their houses to cock a snook at the Army. Surely, that is innovative, General?

How else does one strike fear in the hearts of one's own people: abductions, rape, torture? This is what is understood by "dirty war" in a banana republic.

The new strategic thinking seems to be that there is no risk-free option to neutralise such violent activism. So, whatever the cost and the risk of escalation, the Army must salvage its honour by avenging the censoring stones. 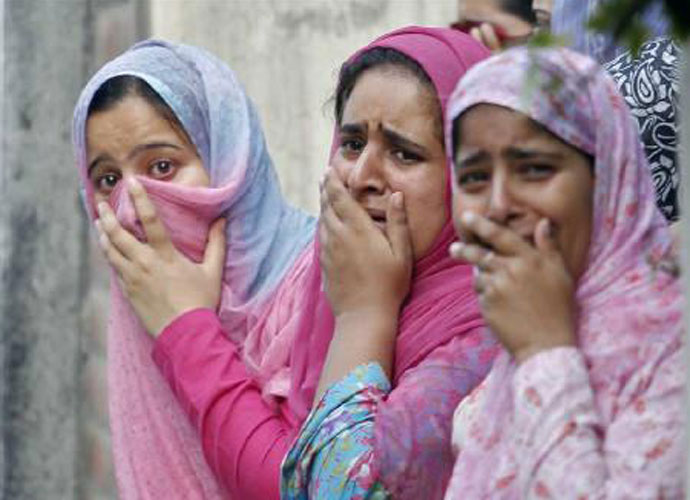 How else does one strike fear in the hearts of one's own people: abductions, rape, torture? Photo: Reuters

The problem with these "innovative" devices is that they turn the international spotlight on Kashmir.

The "enlightened" media in the West, rather than highlighting Pakistan's role in the proxy war, tends to harp on the new terms of engagement and the absence of a political strategy in Kashmir, more so since both the state and the central governments are under BJP's control; it tends to incessantly replay the unrest on the streets: teenagers taking on the might of the Army and the latter responding with human shields.

With that, the world draws all the wrong inferences about the civil dissonance at play; the most odious being the comparison to Palestinian boys and girls and the strife in the Gaza Strip.

The conclusion the diplomatic community tends to draw from this is not that Pakistan is inflicting a thousand cuts, but that India is scoffing at human rights of the Kashmiris and that it does not seem inclined to resolve the issue as it is not talking about it.

As I understand it, use of force is intended to serve as a leverage to achieve short spells of equilibrium in which the political process can be kickstarted. But that does not seem to be happening.

Admittedly, Mufti Mohammed Sayeed's demise was a major setback; he was one person who could have convinced the Kashmiris about the sincerity of the Modi government.

In all fairness, post-Mufti, the scope for political intervention had indeed narrowed down and there is no one on the horizon who can act as a political interface.

But somewhere a beginning has to be made and this can come with the realisation that civil unrest has less to do with Pakistan and more to do with the dissatisfaction with the State and disenchantment with the political class.

To add to our misery, Pakistan is unsure of its impulses and split between its political and military goals. So, given that Pakistan cannot be handled on a dual plane, given the flip-flop nature of our relationship for the last 70 years, India will have to devise its own ways to neutralise the terror threat from across the LoC.

We cannot keep waiting endlessly for Pakistan to resolve its existential dilemma over Kashmir and creation of Bangladesh. In fact, India, too, should be least worried about a stable Pakistan, given the schisms and faultlines in the neighbouring country.

At the end of the day, we all realise the enormous challenges that the Army faces and the dire need to end the civil strife, as well as extinguish the jihadi threat.

Does Mr Modi have a strategy that will address the civil dissonance, the problem of a youth that is ready to self-destruct, and religious absolutism?

Innovative devices won't do but some political ingenuity can surely help.

Also read: For the sake of Indian democracy, Modi should keep Army out of politics

Post your comment
#Narendra Modi, #Kashmir crisis, #Indian Army
The views and opinions expressed in this article are those of the authors and do not necessarily reflect the official policy or position of DailyO.in or the India Today Group. The writers are solely responsible for any claims arising out of the contents of this article.