Why don't we talk enough about these brave women running rural India?

Women are the mainstay of small-scale agriculture, the farm labour force and day-to-day family subsistence. The biggest myth is that the rural woman is part of her land's wealth. Yes, but only to the extent of generating it. They don't own land but produce secondary crops, gather food and firewood, process, store and prepare family food and fetch water for the family.

On average, women spend about twice as much time as men doing the unpaid work that makes life possible for everyone, like cooking, cleaning and caring. As a result, women have no time to finish their education, learn new skills. The fact that the potential of so many women is going unrealised is a tragedy - but it's also an opportunity. Girls and women aren't just the faces of the poverty; they're also the key to overcoming it.

The Indian woman has moved out from the kitchen, only to be shackled by other obstructions such as inheritances laws for agricultural land in favour of men, preference for sons, patrilocal marriage, female seclusion from decision making et al. Few rural women own or control land and this handicaps them in the face of poverty. She is a victim of not just these circumstances, but of social attitudes.

Over the years, several strategies have been used to empower women. One of them relies on community groups whose members can be trained and equipped to use their collective strength and wisdom to tackle their problems. 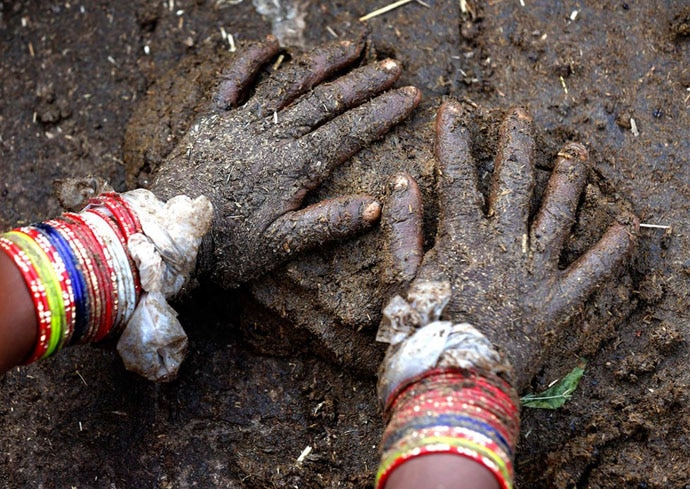 The rural Indian woman is a victim of not just circumstances, but of social attitudes.

In India, the most popular model for empowering village women through financial access and provision of other services is the Self Help Group (SHG) mechanism. A typical Indian SHG consists of 10-20 poor women from similar socio-economic backgrounds who pool their savings into a fund from which they can borrow as and when necessary. They meet once a month to pool savings discuss a social issue, like family planning or schooling for girls.

SHGs are also an instrument for the empowerment of poor and marginalised sectors. They have proved to be an effective instrument for changing oppressive relationships in the home (gender- and tradition-related) and in society. This is especially true for those relationships arising from caste, class and political power . These women from remote, rural villages spoke eloquently about the power of this platform - this platform of coming together, of supporting one another, of “opening doors and gateways of progress.”

“We were separated from power,” a woman told me. “We were in the dark and now we are in the light.”

Nirmala Geghate, a shop owner in Wanoja, a village in Chandrapur district of Maharashtra, has a simple method to manage her finances. Every day - no matter how good or bad the business was - she puts Rs 20 into a secret lock-box at her home; this is her “core reserve” for emergencies. Moreover, on days when she has surplus revenues in the shop she hides the extra cash in another lock-box at her house. From this box she pays daily expenses.

As soon as she has accumulated Rs 1000 she also buys durable stock, such as canned foods, at the value of 800; Rs 200 she puts aside for shop maintenance. This method allows her to have full shop shelves even during times when the revenues drop and she would not be able to spend money on new stocks. Nirmala never had to borrow money, except once when her father got very ill and she had to pay the doctors. Her story was echoed by several women I spoke to. That is what SHG's assistance to Nirmala amounted to: a bit of help where and when it counts most, which often means focusing on women like her.

Development experts now widely recognise women's role as critical to economic progress, good governance, and healthy civil society - especially in developing countries. The key levers for change, from the ground up, are clearly female education and women's access to income.

This is not only true, it is measurable. For example, women are more likely to spend their resources on health and education, investing up to 90 per cent of their earnings in this way compared with just 30-40 per cent for men.

However, to free people from poverty and empower women, far more than access to affordable credit is required. Income alone is not enough to alleviate poverty, so they often pair skills training with education, particularly in basic and financial literacy, and give women information about their legal rights and social issues, including protection against violence and exploitation. Without these services, women cannot develop resilience to withstand political, economic, social or environmental upheaval. Overturning entrenched cultural and social mores is no easy task.

During my recent visit to villages where I have been closely associated with social programmes, I found sprinklers spouting rainbow streams of water into the fields. In one village, a new deep well replaced the old inadequate shallow one. A large pond had been dug to catch rainwater and provide for aquaculture. Irrigation stretched from the pond to fields planted with grains, quick-growing rice and potatoes. There was watershed management to stop erosion off the steep slopes.

There was a light shining in the villagers' eyes when they talked about the transformation of their village economy. Hope had begun coursing through communities once shackled by fatalism and low expectations. For a world where people live on less than an American dollar a day, this is an important step. In the words and expressions of these unlettered people. It showed me the boundless potential for immense possibilities.

I was humbled by everything that I learned that day about their life, their enterprises, and the people who have benefited from the success. I found the bliss and flavour of quotidian wisdom worn humbly and lightly. In the lives of these tenacious women, I found the story not of a country's doom but a story of a country's will to survive.

#Agriculture, #Rural India
The views and opinions expressed in this article are those of the authors and do not necessarily reflect the official policy or position of DailyO.in or the India Today Group. The writers are solely responsible for any claims arising out of the contents of this article.