Indus Waters Treaty must change for environment, not to choke Pakistan's lifeline

The pact must bring riparian nations China and Afghanistan on board amid changing climatic conditions.

Ten days after the dastardly terrorist attack at Uri in Jammu and Kashmir, much water has flown down the Indus. The Indus Water Treaty 1960 (IWT) that governs the water-sharing arrangement between India and Pakistan has suddenly hogged all the limelight with scores of people demanding its abrogation to choke Pakistan thirsty.

Under this treaty, India and Pakistan share the waters - Pakistan uses almost 80 per cent of the water from the basin - of six rivers that flow through India towards Pakistan. Of these, India has complete rights over Sutlej, Beas and Ravi, while Pakistan uses Chenab, Jhelum and Indus.

On Monday, Prime Minister Narendra Modi was briefed about the options India can exercise vis-a-vis the IWT following which it was declared that India will be dramatically reconfiguring the usage of its share of the waters in an as-yet unexplored manner.

Apart from steps to increase/expedite its water storage infrastructure and carrying out "non-consumptive" use for its as-yet grossly under-utilised, under-exploited share as per the treaty, an inter-ministerial group will look into India's rights on its share.

Without going into the technical details, grand as it may sound, and legally valid too, fact remains that the provisions for utilisation of our own water share are likely to take many years to materialise.The inter-ministerial group can do a better and faster job.

Time for a relook

To start with, the 1960 vintage treaty falls short on several counts. Shakil A Romshoo, professor and head of the department of Earth Sciences at Kashmir University,advocates a relook at the Indus Water Treaty from the climate change perspective and maintaining ecological flow - points which are not part of the original agreement. The treaty talks of distribution of water only between India and Pakistan, but nothing about maintaining environmental flows.

India happens to be the middle riparian state for the transboundary Indus river system. The Indus drainage basin stretches over 1.1 million sqkm area across Afghanistan (9 per cent), China (8 per cent), India (38 per cent) and Pakistan (46 per cent).

While India and Pakistan remain the largest stakeholders due to the size and volume of the waters and vis-à-vis their usage, Afghanistan (a small area due to Kabul river) and China - as Indus and Sutlej originate in Tibet - too are part of the basin. The river system in the basin includes: Ravi, Beas, Sutlej, Swat, Chitral, Gilgit, Hunza, Shigar, Shyok, Indus, Shingo, Astor, Jhelum, Chenab and Kabul.

The Indus Basin Knowledge Platform correctly unfolds the Indus basin scenario,: "The Indus Basin epitomises a grand challenge due to its high poverty rates, high groundwater extraction, increased environmental degradation and risk of floods and droughts due to climate change."

Stating the direct impact of climate change on water, the intergovernmental panel on Climate Change (IPCC) has already warned in its report that changes in precipitation in a warming world will not be uniform. The intensified hydrological cycles will see fewer rainy days, but more intense rainfall on those days.

This directly leads to floods, something similar to what Kashmir Valley witnessed in September 2014. Since 2010, Pakistan has had a number of alarming floods causing huge loss of life and damage to agriculture land/property.

Beyond the India-Pakistan binary

With such extreme climatic events predicted to occur in greater frequency, it makes more sense to take a holistic look at the entire basin. Going beyond the geo-political strategic conditions, it becomes imperative to look at the whole basin through changing climatic exigencies, which will mean the involvement of Afghanistan and China.

Glaciers in the Kashmir Himalayas and Karakoram ranges contribute to the majority of water flow in the basin while the contribution from China (Tibet) and Afghanistan is far less. But involving China becomes important also because of the gaping hole - a dark zone when it comes to knowledge about geographical and climatic conditions in the Tibet Autonomous Region from where both Indus and Sutlej originate, even though not many are aware about the exact developments taking place in the region. 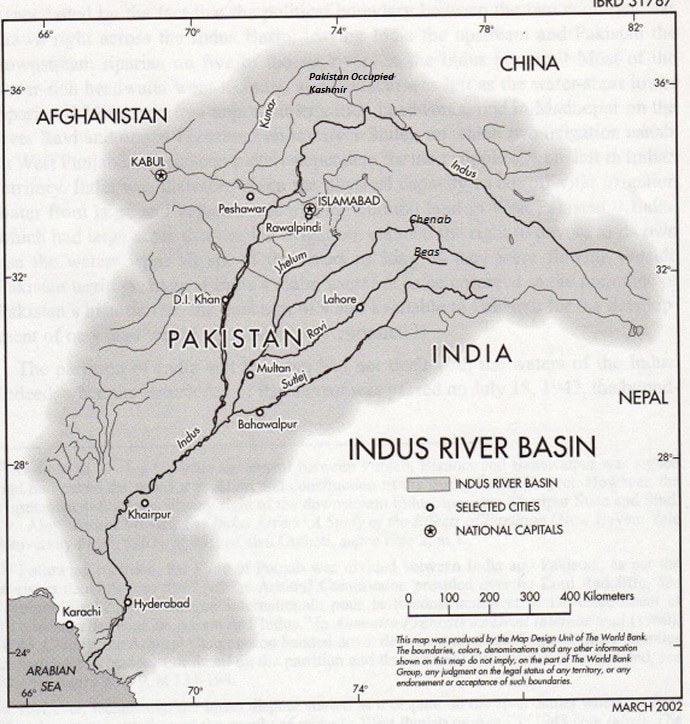 The many stakeholders of Indus River System.*

China has managed to keep a lot of secrets there. In fact, there is lack of transparent mechanism on data sharing. Himanshu Thakkar of South Asia Network for Dams, River and People explains: "In June 2000, Siang area in Arunachal Pradesh experienced exponential rise in water level. Similarly, in August 2000, Sutlej river area in Himachal Pradesh experienced exponential rise in water level. In both cases, there was no record of heavy rainfall. So where did that water come from? China totally declined any hand in it."

He points us to a medium-scale dam on Indus, which China built without informing the downstream users, near Demchok in Ladakh. As per a report in the April 2010 issue of Journal of Defence Studies, the dam was located by Alice Alibinia, a British journalist and author of Empires of the Indus , while tracking the source of the Indus in Tibet.

China has huge economic interests in the region due to the Northern Route of the proposed China Pakistan Economic Corridor (CPEC) falling in Pakistan-Occupied Kashmir. What the CPEC means for two riparian countries. Photo credit: The Express Tribune

So, on one hand, the actual portion of Indus (both the river and the basin) is very less in Tibet, on the other, China indirectly gets a say in the much larger area - including the Ladakh ranges of Aksai Chin occupied by China and the PoK portion of Karakoram.

Remember, the Indus - starting in Tibet - after passing through Ladakh travels through Gilgit and Baltistan in PoK, and then flows through the Pakistani plains before finally draining into the sea near Thattha in Pakistan. China also conducts a lot of military activity in the Ngari area of the Tibet Autonomous Region, where it has also been promoting large-scale tourism in the Kailash Mansarovar region, an area that lies directly northeast of Himachal Pradesh and where Sutlej too originates.

Given the geo-political situation in the region, bringing China and Afghanistan on board sounds a far-fetched idea for many. The reasons are obvious. An expert at a recent dialogue on the Indus basin described the four countries of the river system as a "Matrix of Paired Opposites". Hostile: Afghanistan-Pakistan, India-Pakistan; Friendly: China-Pakistan, India-Afghanistan; Neutral: Afghanistan-China. Of these, India and China are convergent on global issues, but divergent on regional issues.

It may indeed seem a far-fetched idea at this juncture - and China has not shown any interest in any kind of data sharing, and refused as yet any bilateral treaty with India vis-à-vis the rivers shared by the two countries. But considering the fast-changing climatic conditions, a collective data set (including data about precipitation - snowfall/rainfall, melting of snow, soil erosion, dams and storages on rivers and other spatial and temporal weather aspects) for the much-needed water balance in the region is missing. Work is in progress at many levels, but the efforts are isolated and scattered.

The Indus Water Treaty does not have an exit clause, but there are provisions for making changes that are mutually agreeable. While Pakistan may not agree to change the provisions as it gains a massive 80 per cent share of the water as per the treaty, Indus is the country's lifeline - it will have to sooner or later take into consideration the changing climatic conditions and hence a need for a comprehensive arrangement.

*Adjustments were made to the map by DailyO to reflect the status of Pakistan-occupied Kashmir.

#CPEC, #Uri attack, #Pakistan, #Indus Waters Treaty
The views and opinions expressed in this article are those of the authors and do not necessarily reflect the official policy or position of DailyO.in or the India Today Group. The writers are solely responsible for any claims arising out of the contents of this article.