Any form of open withdrawal from the pact will automatically draw the World Bank into the dispute - and in support of Pakistan.

Since the Uri attack, there has been a growing demand in India for mighty retribution against Pakistan. In spite of bravado in his days as prime minister aspirant, Narendra Modi has come to realise the enormous risks attached to taking open, punitive action. However, following the Indian Army's usual practice of under the cover surgical retaliation will not provide any political dividend. So, there is a search for something spectacular, which will hopefully not go out of control. In this context, the abrogation of the Indus Waters Treaty has come into serious consideration. 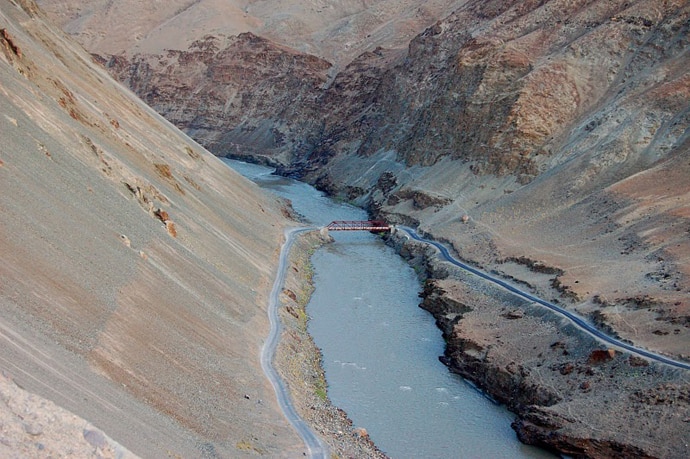 The threat to stop sharing the Indus waters with Pakistan can be portrayed as a muscular response. Photo credit: Reuters

In the last couple of days, several hawkish Indian commentators have been advocating in favour of India withdrawing from this 65-year-old water sharing treaty unilaterally. This open and concerted demand for the abrogation of Indus Waters Treaty is something very new in the Indian public discourse. The threat is no longer limited to speculation in the Indian media.

External affairs ministry spokesperson Vikas Swarup, in his media briefing on Thursday (September 22), has given clear hints about the Modi government's strategy of opening a new front against Pakistan: "For any such treaty to work, it is important there must be mutual trust and cooperation. It can't be a one-sided affair."

Modi had recently decided to raise the Balochistan bogey against Pakistan to dilute criticism about his failure to contain trouble in Kashmir. Following the same strategy, the Indus Waters Treaty is being put at stake to deflect public anger over his regime's failure to prevent the Uri attack. The threat to stop sharing the Indus waters with Pakistan can be portrayed as a muscular response.

Immediately after Independence, both India and Pakistan engaged in a conflict over their share of the river's waters. The hope of financial support from the World Bank for their much-needed irrigation infrastructure brought both the countries to the negotiation table in March 1952. After more than eight long years of hard negotiation, India and Pakistan reached an agreement on September 19, 1960.

The Indus Waters Treaty has stood the test of time for past 56 years, though, during this time, many questions have been raised about its survival, and both countries have expressed their differences on several issues. Still, the World Bank continues to showcase the treaty as a major success story of its credibility as a third-party negotiator in any river dispute.

The international community highlights this treaty to show that water has the potential to bring even two adversaries like India and Pakistan to a platform of cooperation.

The Indus Waters Treaty has survived two major wars between India and Pakistan (1965 and 1971) and the Kargil conflict in 1999. It is one of the successful examples of the two neighbours' diplomatic efforts to build a mechanism of sharing waters. However, as a cooperative water management mechanism, the Indus Waters Treaty has been far from satisfactory for both India and Pakistan.

Uncertainties over the interpretation of the treaty with respect to infrastructure development in the western rivers have become a major source of friction between India and Pakistan. On the other hand, water scarcity in the basin in the face of rapidly increasing demand has been the source of regional conflicts within India and Pakistan.

It is true that scarcity of water is fast deteriorating the Indus basin. Any prospect of the best possible use of the waters - the only long-term answer to the basin's growing thirst - has not materialised under the 1960 treaty.

Thus, it is necessary to work for a new Indus treaty that can address fast-evolving water-sharing challenges in the basin. The new treaty might also open up possibilities for Afghanistan and China, the two other riparian countries of the Indus waters that would be part of the new arrangement.

While it is necessary to work for its revision to pave the way for greater cooperation, it will be imprudent on India's part to unilaterally decide to disregard the1960 Indus Waters Treaty. In many ways, this will be an act of desperation in finding ways for retribution against Pakistan.

India needs to remember that the 1960 Indus Waters Treaty is an international agreement. Unilateral withdrawal from it will bring global condemnation, and the moral high ground, which India enjoys vis-à-vis Pakistan in the post-Uri period will be lost. This will give the regime in Pakistan to turn the tables.

The uniqueness of the Indus Waters Treaty is it is the only international water treaty co-signed by a third party - the World Bank. Any form of India's open withdrawal from the treaty will automatically draw the World Bank into the dispute - and in support of Pakistan.

If India decides to withdraw from the treaty, Pakistan can also take India to International Court of Justice (ICJ) and, in all likelihood, win the case. The world court's decision in 1997 on the case concerning Gabcikovo-Nagymaros project on the Danube river between Hungary and Slovakia clearly establishes the importance of respecting the provisions of the existing international water agreements.

Fear of censure from the ICJ had also forced Malaysia to change its mind to backtrack from its threat in 2002-2003 to annul its water-sharing agreement with Singapore. So, India should think carefully before taking any step to rescind the 1960 Indus Waters Treaty.

If India decides to ignore international norms and treats the Indus waters as a weapon to punish Pakistan, it will unfortunately lead to huge human insecurity in the neighbouring country. At the same time, this will make India's own dams and reservoirs in the river system genuine military targets for Pakistan to retaliate. That will be a huge risk to take. Even the consideration of that risk had forced Turkey to say no to the American request in 2003 to strategically release more water from its dams to create trouble for Saddam's army.

Certainly, there are not many viable options available for prime minister Modi to successfully inflict retribution on Pakistan for the Uri attack and to openly take credit for it. If he decides to sacrifice the Indus Waters Treaty as a face saver, it will impose a huge cost on India itself.

#Uri attack, #Pakistan, #Indus Waters Treaty
The views and opinions expressed in this article are those of the authors and do not necessarily reflect the official policy or position of DailyO.in or the India Today Group. The writers are solely responsible for any claims arising out of the contents of this article.