Kanhaiya Kumar isn't an extremist, the Indian state is

This article has been co-authored by Hari Prasad and Samir Kumar.

Yet again, Indian society is roiling. A vicious debate has grown out of the media uproar over the jailing of a student leader, Kanhaiya Kumar, at Jawaharlal Nehru University (JNU) on the charge of sedition. This has compounded the public outrage over several recent incidents, most recently the suicide of a Dalit student, Rohith Vemula, and the subsequent crackdown during the ensuing protests. 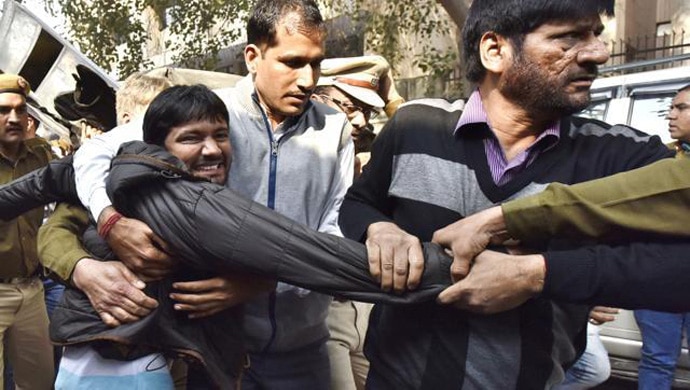 In October of 2015, a Muslim man was killed by a village mob after he was falsely accused of consuming beef. Even the most casual of armchair analysts have observed a disturbing pattern of violent anti-minority and ethno-religious ("communal") incidents emanating from the country. In 2013, communal rioting killed 48 in the district of Muzaffarnagar, and in 2002, over 1,000 (mostly Muslims) people were killed in Narendra Modi-helmed Gujarat.

Observers have marked with alarm the impunity with which the extremist forces of the Hindu right have been able to operate, a dangerous and avoidable phenomenon for what many see as a rising democratic world power.

The heavy-handedness of the state, influenced by extremist patrons, is a familiar sight. This is the Indian state's pattern of interaction with its periphery, not only with respect to its society, but also to its territory. Armed separatist movements are active in Kashmir and the northeast, and a Maoist/anti-casteist insurgency ravages the heart of North and Central India.

These challenges clearly show a process of state formation: in this case, the state attempting to establish its unrivalled control over weakly administered territory. As the state cracks down on its periphery, so insecure political entities seeking to expand their power base crack down on the periphery of society. For narrower propositions, like the Hindu nationalist project, crackdown shows the tenuousness with which they themselves feel their proposal holds.

Description of the problem

Violence and repression of class, ethnic, and religious minorities occurs frequently, and the state appears to be either feeble against the enabling forces, or worse, the enablers themselves. Data is inconclusive on the frequency of communal rioting since Narendra Modi's Hindu nationalist Bharatiya Janata Party (BJP) took control of the central government, but the high-profile incidents of the past few months send a disturbing message.

The BJP's ideology contributes to the perpetuation of the repressive dynamic, but things were hardly better under India's other national political party, the Indian National Congress ("Congress"). For example, in 2012, nearly 8,000 sedition cases were filed against anti-nuclear protesters in Tamil Nadu. 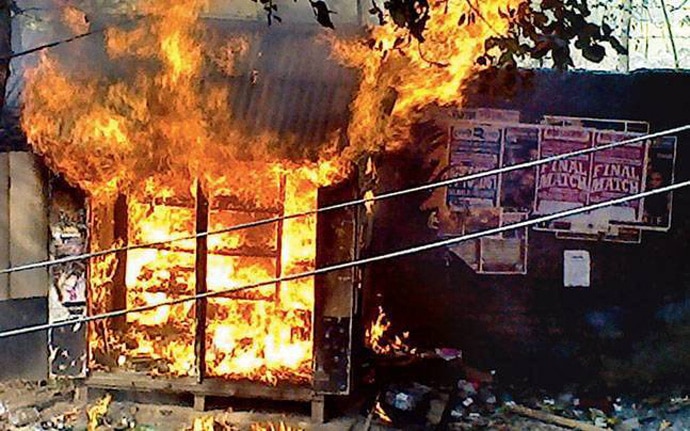 Kapil Sibal, the former information technology minister in the Congress-led government, developed an international reputation for promoting what essentially was online censorship. Minority communities engage in violence as well. In January, certain elements of the Muslim community in the eastern border town of Malda rioted in reaction to a Hindutva activist's comments disparaging the Prophet Muhammad.

The Malda case is suggestive of a sadly familiar cycle: violence begets more violence, extremism begets more extremism. This undermines the state, already structurally weak because of the diversity of historical understanding among the various religious, ethnic, and caste communities.

With the state's legitimate avenue for control rendered more deeply insecure, those in charge view dissent with apprehension, legitimising and empowering others who capitalize on fear.

A recent spate of militant activity in Kashmir calls to mind the innumerable flare-ups in the restive valley since the local community began violently protesting in the late 1980s, unserved by the spirit of the Indian constitution, and sympathetic to forces pulling them away from Indian democracy.

During the tenure of this administration, as in other cycles in India's history, hardliner elements in all parties and communities have been patronised by the ruling party and central government in service of the singular goal of expanding political control in an impossibly diverse polity.

Regional and local political parties are able to build their influence organically, relying on common culture and familial bonds, but national parties, pressured by the expediency of national elections and, recently, the media spectacle of state assembly elections, have sought out extremist partners, whose influence grows quickly and tends to hold in the short term.

In the first few decades of India's independence, Congress supported Sikh extremists who would go on to help spearhead the late-1970s Punjab insurgency to counteract the moderate opposition in the state.

Under Indira Gandhi's state of emergency in that same decade, to prevent Leftist organisations from gaining influence, the government patronised groups like the Shiv Sena who would bring their own brand of extremist politics to the state of Maharashtra. Political parties in the Indian state of Tamil Nadu temporarily banned the film Vishwaroopam over the objections of some Muslim groups.

The regressive Muslim Law Board, despite polls showing their unpopularity among large elements of the Muslim population (like women), has been supported by the Indian state.

While many of the current troubles seen as India can rightly cite the BJP's Hindu nationalism as driving these divisions, the strength of Hindutva today is only a symptom of the larger problem. Nationalisms involve the expansion of territorial control and in the Indian cases, community expansion at the expense of individuals.

For national political parties campaigning and governing, the nationalisms which they have been compelled to adopt in order to win elections and earn credibility have worked against openness, inclusion, and political liberalism.

This dynamic is also reminiscent of state formation, the ugly and bloody process by which a centralised political entity gains pre-eminence over territory. For the colossal misfortune that was the partition of British India in 1947, the hasty unification of the Republic of India was a work of supreme skill and, indeed, fortune.

But there were loose ends: princes who wished to retain autonomy, or territories that would serve the Indian state better as constituent parts. So India resorted to pseudo-imperial tactics: high-handedly negotiating accession treaties with princes with the threat of military force lorded over them. Hyderabad, Junagadh, Jammu and Kashmir, Goa, Sikkim joined in one of these ways.

But what faces India should it choose a more liberal path to expand the state's control - to heed the words of the JNU student union president, Kanhaiya Kumar, and introspect to find a way to appeal to its periphery - is a path uncharted in world history. This liberal kind of state formation, particularly for a country of India's diversity and size, is unprecedented.

While imperfect, the idea of India espoused by the country's founders and codified in the Constitution acknowledged the complexity of the political landscape occupying the subcontinent.

Effectively, there was no other option for a unified India: a host of communities, perhaps with little in common, had to unite under a creed that gave them a path forward, if not always towards growth. The leaders of that time understood that statecraft would involve force, but the consolidation of the polity would require adherence to a sustainable doctrine.

Looking to its neighbour, Pakistan, we see the fallacy of a narrow nationalism and a country glued together without forming the necessary communal bonds. Half of the country seceded in 1971, and the country faces the plagues of an ethnic separatist movement in its West, and ultraconservative religious militancy in its heartland.

Its historical choice to cultivate and support extremist forces has trapped it into supporting those who threaten to consume the state. Looking to the West, even the earliest postcolonial state, the United States, cannot provide a model for India.

The relatively homogenous early United States consolidated its territory by force, nearly eliminating the indigenous communities that inhabited it. Its trials in the past two centuries of incorporating new immigrant communities, eliminating slavery, and providing its minorities equal opportunity, may be instructive, but the expansive visions of the nation that accommodate these efforts built upon the crudely constructed foundation of the state.

Good ideas of India exist and proliferate even now, but they must be actively shepherded by able leaders. Forward-looking visions are fleeting, competing with visions that rest on the more intuitively resonant present or past, and require stewardship with boundless energy.

But state formation always tends to be brutal towards the periphery, and in India, the society is as heavy as territory. Imagination is light - it must be supported by efforts to arrange the communities in such a way that those who are distant from the state in one way or another are nonetheless well connected.

The protests and debate around communal rioting and the sedition charges are healthy expressions of a pluralistic vision of India. However, the consistent illiberalism of its national parties and the central government's authoritarian-like tactics undermine the progress that the country has made.

India's task is to somehow continue to open up more space for dissenters and marginalised people, while ensuring that its territory and the communities within it cohere.

(Hari Prasad is a Masters candidate at the Elliott School of International Affairs at George Washington University with a specialisation in Middle East and South Asian Politics and Security. Samir Kumar is an independent researcher on South Asia's political economy.)

#Congress, #BJP, #Kanhaiya Kumar, #Anti-nationalism
The views and opinions expressed in this article are those of the authors and do not necessarily reflect the official policy or position of DailyO.in or the India Today Group. The writers are solely responsible for any claims arising out of the contents of this article.