In the 16 years since she has been on her fast, it was her story that linked itself to that of many others who have been impacted directly by the AFSPA.

Every 15 days, Irom Sharmila, who has been on an epic fast since November 4, 2000 demanding repeal of the draconian Armed Forces Special Powers Act (AFSPA), is escorted by jail authorities under security cover in an ambulance from the special ward at the Jawaharlal Nehru Institute of Medical Science that acts as her prison, to the chief judicial magistrate's court (Imphal East).

There in court, she is asked only two questions: "Are you continuing your fast?" and, "Is there anything you want to say?"

To the first question, Sharmila has always said one word, "Yes"; and to the second question, she makes certain requests from time to time: a change of newspaper subscription, permission to talk to media or other people who sometimes wait to meet her on the sidelines of her appearance at the court.

It was one such appearance on July 26 where local journalists had assembled when she made the announcement that she would discontinue her fast from August 9 onwards, the date of her next court appearance.

In the audio clip that I have where she addresses the press, I can hear the gasps when she makes her statement about ending her 16-year fast and the immediate buzz of media impatience lobbing questions even as she holds her ground to put some of her thoughts across.

Sharmila starts out saying, "In the 16th year of my fast, I have taken a decision to change my strategy," and then goes to add that even as people take to the streets in violent protests, the political leadership remain deaf.

"Till the time there is a change in the leadership, there will be no change in governance and administration and I have decided to join politics with a single focus on the AFSPA... I will contest as an independent candidate," she adds. 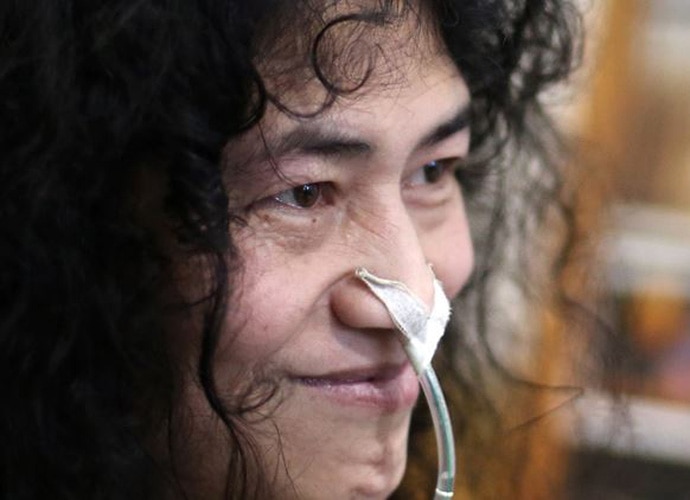 If we have not been able to live up to Irom Sharmila's expectations, we must at least accept her decision with grace.

Asked if her decision to end her fast is an admission that she has acknowledged defeat of her own cause to remain steadfast in her stand against the AFSPA, she asserts: "I want victory for my cause while I am still alive."

The reactions from the public and various civil society groups will take some time to trickle in but there can be no denying that Irom Chanu Sharmila has been a lone long sufferer.

Sometime in 2010, a lawyer relayed a message from Irom Sharmila asking for a meeting with me and when I did so at the court premises, I realised how lonely her struggle was. There was no one around her except the jail and court authorities.

It turned out that she wanted me to keep communication channels open with a British national of Indian origin with whom she shared a spiritual connection.

We met at the court premises at 15-day intervals but the first greeting was always difficult for me.

In Manipur, the standard greeting is to ask, "Have you eaten?"

Every time she asked that of me, it was difficult not to imagine what it must be like to not have a sense of taste, to chew and swallow food.

Yes, in the 16 years of her fast, Irom Sharmila has been nasally fed a mix of food supplements and juice (she fasts within her fast: where she skips her feeds once a week) but to forgo the sights and smell and texture of food is something that we can only imagine, not live with, as Sharmila has done.

During the course of our meetings, Sharmila let on a range of her emotions: the lack of support from the public and various groups apart from token support that she would see when she would be "released" every year.

In one of her poems, she wrote poignantly:

"Am I a spectacle

to be just stared at?

they go back to their

There is no saying how the civil society groups will react: they did not take it too kindly when Irom Sharmila had earlier made public her feelings about her companion, going so far as to assault him when he came to meet her.

But 16 years is a long time to have someone shut off from the world around her.

We need only to cheer for her. The crowd that is asking whether she is making the right choice to go into politics.

Well, when Irom Sharmila announced that she would be on an indefinite fast against the AFSPA, the same crowd had given the verdict that she was not in her senses.

In the 16 years since she has been on her fast, it was her story that linked itself to that of many others who have been impacted directly by the AFSPA (illegal detentions, fake encounters/extra judicial killings, enforced disappearances, rape).

If we have not been able to live up to her expectations, we must at least accept her decision with grace.

What chances does Irom Sharmila have of winning in the 2017 elections?

For all that's worth, the manner of elections and public participation in Manipur is a sheer irony given that the state never runs out of protests over various issues ranging from human rights violations to political identity to governance.

The Congress has been ruling for three terms now despite being rapped for its corruption streak while the BJP is waiting in the wings with the hope that it might make its presence felt.

There is the money factor too: elections in Manipur happen to be the only time when the Manipur public loves their political representatives.

The odds are heavily against Irom Sharmila. She knows that and says as much, "There is a tendency to vote for cash but if we want to change to an administration or governance that will listen to the public, it is time we took that responsibility by choosing well. I cannot compete when it comes to money."

#AFSPA, #Manipur, #Irom Sharmila
The views and opinions expressed in this article are those of the authors and do not necessarily reflect the official policy or position of DailyO.in or the India Today Group. The writers are solely responsible for any claims arising out of the contents of this article.

The writer is an Imphal-based journalist.