ISIS has no official presence in Kashmir. Anyone claiming a terror strike in the group’s name is doing so solely on that individual's prerogative.

As of May 2018, the so-called Islamic State’s caliphate in the southeastern regions of Syria’s Deir Ezzor region stands at just around three per cent of the territory compared to what the terror group had managed to hold on to from 2014 to 2016.

The kaleidoscope of military involvement in Syria, from the US-led coalition against ISIS, Russia and Iran’s geopolitical maneuvering to both destroy ISIS and protect their own regional interests led to a swift geographical decimation of the Islamic State, which in turn gave rise to the narratives of the “end” of ISIS. How terror groups such as ISIS function is not the chaotic, ad hoc manner that much public discourse perceives it to be. The structures and functionalities of global jihadist groups are often steeped in deep strategic planning, structure, hierarchies and policies that would allow them to survive as non-state militant entities within existing nation-states.

For example, Al Qaeda in its formative years starting from the late 1980s spreading into the 1990s under Osama Bin Laden’s leadership formulated the framework of “centralisation of decision and decentralisation of execution,” which basically allowed the hierarchy of the group flexibility, decentralised operational decision making while still keeping the leaders in the loop on final operational inputs, which not often involved much interjection on the conduct of the intended terror strikes but the geopolitical outcomes of said act(s).

In the words of Fazul Abdullah Mohammed, one of the brains behind the 1998 bombings of US embassies in Kenya and Tanzania, Al Qaeda had centralisation, structure, and it was not dull, but dynamic, with everyone liberally involved.

This gave a sense of responsibility, power and worth to the middle commanders in Al Qaeda who were successful in expanding the groups reach in places such as Yemen, Africa and so on, giving it the global presence it was needing to attack American and Israeli interests and spread its ideology in a systematic manner. The success of this distribution of decision making was visible when Al Qaeda’s top hierarchy was stressed as American drone campaigns in Afghanistan and Pakistan intensified over the past few years.

The above is important to decipher if one is to understand ISIS, whose roots lie in what was earlier known as Al Qaeda in Iraq (AQI) under erstwhile chieftain Abu Musab al-Zarqawi, the ideologue of ISIS.

ISIS’ approach to both operations and propaganda has borrowed many strategies from Al Qaeda’s operations over the past two decades, and expanded them significantly using technology.

However, ISIS has also taken advantage of two things much more decisively, its talent pool of foreign fighters and the internet. Despite having just three per cent of its territory remaining, the group has put in place a branding apparatus that even Al Qaeda may be envious of, and this approach for anyone to wear its brand and commit acts of violence in their name bodes well for an organisation that is today in hiding, and unable to openly fight its adversaries in Syria, yet arguably has a growing global presence.

The whole idea of ISIS Jammu & Kashmir (ISJK) is a misnomer, and its legitimacy or illegitimacy in the future of the Kashmir valley depends on India’s approach to its counter-terror narratives which requires much more nuance, thought and long-term strategy than the options of using conventional military tactics as counter-terrorism strategies.

While this is effective in containment and neutralising threats in an immediate time frame, the models adopted and popularised by ISIS in order to create long-term post-geography presence to extend their longevity requires a significant disruption in Indian thinking on countering terror.

India has already faltered in understanding how to counter such chimeric terror threats in a digital age where the flow of information is so fluid, designed and tactful that even the likes of ISIS and Al Qaeda themselves employ measures to counter “fake news” online.

In February, Jammu & Kashmir DGP SP Vaid explained that there was no evidence of ISIS being in the valley, and that an attack committed by one Eisa Fazili, who could be at best be described as a freelance jihadist, which killed a police officer in Srinagar was done unilaterally in the name of ISIS.

Fast-forward to June, and DGP Vaid attached a terror attack in Kashmir to “ISJK”, legitimising a moniker that in all likelihood doesn’t exist, and did not exist in ISIS hierarchy’s thinking.

However, this would not deter the various layers of ISIS propaganda machinery to try and take advantage of the situation and advertise this as its own strategic home run. The repercussions of this move could be severe for the stability of a region already on the tenterhooks.

ISIS via Amaq news using the app Telegram claiming an attack on a police officer in Anantnag, Kashmir. (Photo: ORF)

The differentiation between committing an act of terror in the name of ISIS and for ISIS is important to understand, as this definition stands at the cusp of knowing how to not fall into ISIS’s narrative trap.

Even though Fazili’s act was broadcasted by ISIS’s official media outlet Amaq, technically legitimising the act, it is important to note that it was Fazili himself who alerted ISIS’s online apparatus to what he had done, asking them to stake claim and not the other way around. 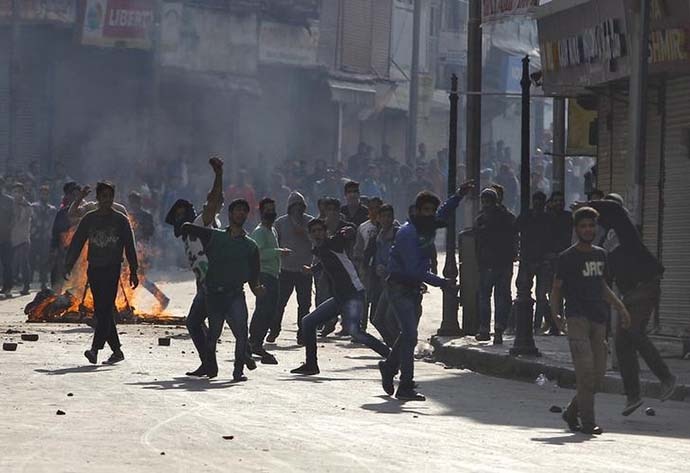 However, making such claims is a tactic employed by ISIS today to maintain its name and keep itself in the global spotlight and fight off the narratives that it has been defeated.

For example, Amaq also claimed the gun violence attack in Las Vegas in October last year, releasing images depicting a bloodied Mandalay Bay hotel, and as we all know now, the mass shooting had no connection with ISIS whatsoever. Fazili’s attack was self-proclaimed, and ISIS took the opportunity on offer in an attempt to create disruption in an area where it has had no presence, especially if the gains were psychological.

The oddity here is that ISIS as an organisation is perhaps well aware that it will not be able to find space in the Valley to setup a wilayat (an administered province).

As per data studied by this institute, many pro-ISIS individuals have commented that it is unfeasible for ISIS to think it will be able to officially have a presence in Kashmir, a region divided in battle between the kafirs (nonbelievers), meaning Indian Army and patriots and nationalists fighting for land (Pakistani militant groups and freedom seekers).

Whether a region is an official ISIS wilayat or not is important from a counter-narrative perspective, any attack being committed in the name of ISIS can be and should be dispelled urgently, clarifying that ISIS has no official presence in Kashmir and anyone claiming a terror strike in the group’s name is doing so solely on that individual's prerogative.

For any official ISIS wilayat, a group must first pay bayat (oath of allegiance) to the group and its leader Abu Bakr al-Baghdadi, on such acceptance (depending on the current nature of ISIS hierarchy), which requires full theological, political and military commitment to the commandments of the caliphate. DGP Vaid attributed a terror attack in Kashmir to “ISJK”, legitimising a moniker that in all likelihood doesn’t exist,

For example, the group Abu Sayyaf in the city of Marawi in Philippines committed themselves to ISIS through bayat, that Baghdadi approved and the group changed its military tactics of conducting terror strikes, marketing the same via media propaganda and interpretations of Sharia as per ISIS rules.

Abu Sayyaf was henceforth officially identified as Islamic State of Iraq and the Levant — Philippines Province. ISIS has similar international wilayats in Egypt’s Sinai, Yemen, Libya and a few others that remain unconfirmed. The bayat, and its acceptance, should be seen as the main form of legitimacy for a group claiming to be ISIS, and even that, where the acceptance is published, in what manner and pretext, should determine the authenticity of a militant group claiming either allegiance or alliance to ISIS.

The reasons why the Kashmir government or its police apparatus may have looked to legitimise ISJK could range from the ease of militarily engaging the growth in militancy further in the valley without any domestic or international repercussions to the old school art of purely miscalculating a political situation for short term gains.

However, legitimising a brand such as ISIS is a flammable tactic to play with, not entirely on acts of militancy but the long-term narrative damage this could cause both for the people of Kashmir and efforts to undermine ISIS’s online propaganda machinery which, as of today, without undermining its competency and lethality, is still more structured and organised than India’s abilities to counter such challenges in the online sphere.

(This article was originally published by the Observer Research Foundation, New Delhi. The original version can be found here.)

#Law order, #Terrorism, #ISIS, #Jammu and Kashmir
The views and opinions expressed in this article are those of the authors and do not necessarily reflect the official policy or position of DailyO.in or the India Today Group. The writers are solely responsible for any claims arising out of the contents of this article.