Our negligence on water scarcity has been so deep that it can be remedied only through hands-on political direction.

The inter-ministerial task force set up by Prime Minister Narendra Modi for correcting India's under-utilisation of its allocated share of waters under the Indus Waters Treaty (IWT) has just held its first meeting.

The water-related issue facing India, however, is much larger: The continuing absence of institutionalised, integrated policy-making in India, which has prevented proper management of the country's increasingly scarce water resources.

Indeed, India stands out for its lack of a national action plan to build water security.

When the Indian Republic was established, the framers of its Constitution did not visualise water scarcity in the decades ahead, given the relative abundance of water resources then. Therefore, they left water as a state-level subject, rather than making it a federal issue.

Similarly, the IWT, under which India big-heartedly agreed in 1960 to the exclusive reservation of the largest three of the six Indus system rivers for Pakistan, was negotiated in a period when water shortages were uncommon in most parts of India.

This led India to sign an extraordinary treaty whose terms commit India to indefinitely reserve over four-fifths of the total waters of the Indus system for Pakistan. 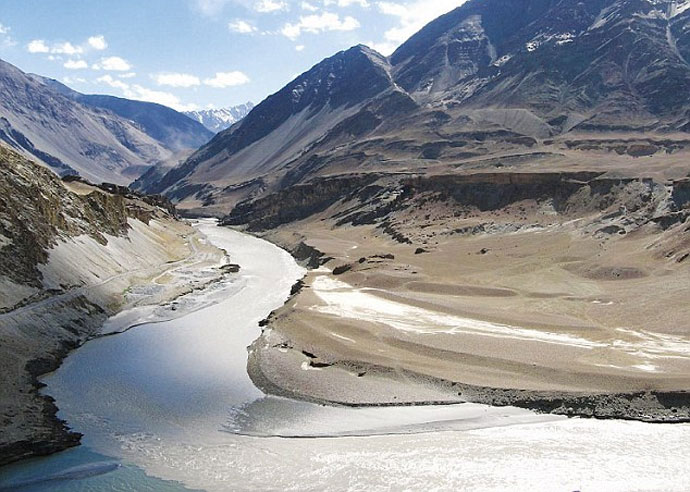 The treaty uniquely parceled out entire rivers to Pakistan. It granted Pakistan virtually exclusive rights to use the waters of the Chenab, the Jhelum, and the main Indus stream - known together as the “western rivers”.

Four of these six rivers originate in India (three of them in Himachal Pradesh), and two (the main Indus stream and the Sutlej) originate in Tibet.  Only the Jhelum originates in Jammu and Kashmir.

Today, the national water situation in India is far worse than in China. China's population is not even 10 per cent larger than India's but its internally renewable water resources (2,813 BCM) are almost twice as large as India's.  In aggregate water availability, including external inflows (which are sizeable in India's case), China boasts virtually 50 per cent larger resources than India.

Yet India serves as a case study of how a disjointed policy approach and lack of vision on managing water resources can exact serious costs by creating water shortages across much of the country. In a sense, India's fragmented approach is exactly the opposite of China's highly centralised approach centred on mega-projects.

The startling fact is that the responsibility for water issues is so fragmented within India's central government that 12 different departments or ministries deal with different segments of water resources.

To promote clear responsibility and accountability in national water management and to facilitate integrated policy-making, India must end its present fragmented approach on water issues.

As for India's under-utilisation of its IWT allocated water share, the task facing the task-force is formidable. For example, the waters of the three eastern rivers not utilised by India aggregate to 10.37 BCM yearly according to Pakistan or, according to the UN, 11.1 BCM.

These bonus outflows to Pakistan alone amount to six times Mexico's total water share under its treaty with the US, and are many times greater than the total volumes spelled out in the Israel-Jordan water arrangements.

Although the IWT permits India to store 4.4 BCM of waters from the Pakistan-reserved rivers, a careless India has built no storage. And despite the treaty allowing India to build hydropower plants with no dam reservoir, India's total installed generating capacity in J&K currently does not equal the size of a single new dam in Pakistan, like the 4,500-megawatt Diamer- Bhasha, whose financing for construction was approved recently.

Against this background, the task force set up by Modi, with his principal secretary as its chairman, may be a step in the right direction. But constituting this committee is hardly an adequate response to fixing the anomaly in India's under-utilisation of its water share.

Made up of senior bureaucrats who are already busy attending to other tasks, the committee cannot by itself remove the bureaucratic hurdles in the proper utilisation of water resources.

India's political negligence on this issue has been so deep and extensive that it can be remedied only through hands-on political direction and in coordination with the state chief ministers.

More fundamentally, water scarcity is a looming challenge across India. The water wars between various Indian states are highlighting how the competition over shared water resources is sharpening in an alarming manner.

India must treat water as a strategic resource for its own well-being. If the current compartmentalised approach to managing water resources persists, water shortages are going to exact growing economic and social costs in India.

#Pakistan, #Water scarcity, #Indus Waters Treaty
The views and opinions expressed in this article are those of the authors and do not necessarily reflect the official policy or position of DailyO.in or the India Today Group. The writers are solely responsible for any claims arising out of the contents of this article.