When it comes to animal rights in India, why are court judgments ignored?

'Ignoring isn't the same as ignorance.'

In The Handmaid’s Tale, a dystopian story about a totalitarian theocracy where women lose their rights and then rise to fight against the oppression, Margaret Atwood writes, “We lived, as usual by ignoring. Ignoring isn't the same as ignorance, you have to work at it.” Haunting words, especially at a time when we see laws being ignored and blatantly flouted around us.

You can’t help but draw parallels with dystopian fiction narratives, when you see the liminality that we dwell in. Last week, the Supreme Court upheld the ban on Jallikattu in Tamil Nadu, in the same week, it upheld the Andhra Pradesh High Court order prohibiting cockfights. Yet, reports poured in of bull-taming events in Tamil Nadu and cockfights in Andhra Pradesh, in flagrant disregard of the judgment.

India does have some of the best animal welfare laws in the world, however, the punishments are ludicrously low. Offenders can get away with paying as little as Rs 50, a little under a dollar for horrendous instances of animal abuse. Little wonder then it becomes easier, in fact, tempting to disregard the laws that are put in place to protect animals, because there are few consequences.

According to Jayasimha NG, Humane Society International-India’s managing director, cockfights, which were restricted to West and East Godavari districts of AP, spread like wildfire, challenging the authority of the courts. “Arenas with galleries were constructed in plain sight along highways, stakes were high as well. A Telugu daily ran a promotion offering a Nano car and unlimited liquor on winning eight bets, and a two-wheeler on winning six times,” he said. 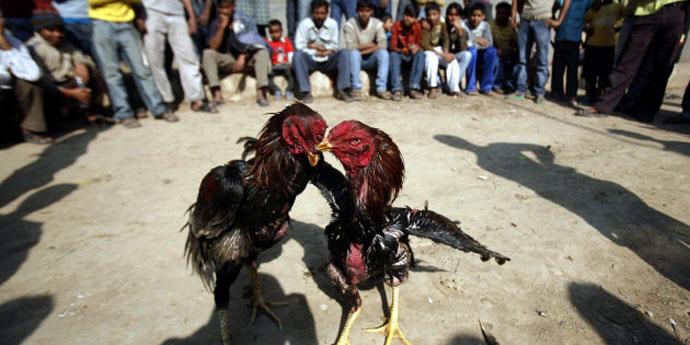 “Such places became a haven for other gambling games such as poker along with open sales of illicit liquor for the people that arrived in hordes to watch roosters fight with specially-designed blades attached to their spurs, slice each other, until one succumbs to a painful death. Events like these were "graced" by the presence of local MPs, MLAs, and MLCs.” The Times of India carried a story, where a senior TDP leader from Bhimavaram even went so far to say, “Cockfights have been a tradition. If we stop it, our opponents will cash in on it.”

“This blatant disregard for the law that stands up for equality and kindness for all living beings reflects badly on us as a nation,” said Harish Iyer, equal rights activist. “I wish the guardians of nationalism would fight this gross disrespect to the apex court decision.”

Animal advocacy groups find themselves the target of vicious trolling, including the CEO of People for the Ethical Treatment of India, whose effigy was burnt in Tamil Nadu. Even Kollywood actor Trisha Krishnan was forced to deactivate her Twitter account, after being the victim of online abuse.

Since then, PETA India and the Federation of Indian Animal Protection Organisations (FIAPO) have written to President Pranab Mukherjee, Prime Minister Narendra Modi and environment minister Anil Madhav Dave asking them to not promulgate an ordinance that would remove the legal hurdles on conducting Jallikattu.

“I am deeply saddened as a lawyer who believes in constitutional mortality and as an animal welfare advocate that elected representatives, law enforcement and few people in Andhra and Tamil Nadu have ignored the law and the orders of the Supreme Court and the High Court,” said Jayasimha. “It's a dark and scary time to be in if the courts directions are not followed.”

While most law enforcers chose to look the other way, there are instances of brave policemen working to uphold the law. In Rajahmundry in Andhra Pradesh, the police sought the help of the locals to stop cockfighting. Rampachodavaram’s ASP Adnan Nayeem Asmi got his team to distribute volleyball kits in the village, asking the youth to celebrate Makar Sankranti by playing the sport instead.

In some ways, it’s reminiscent of a fiction book or a film where in a lawless world, things descend into anarchy. Violence erupts. Laws are broken blatantly, court judgments ignored. The only difference is that this is real life. And it doesn’t end with the rolling of the end credits or the last chapter in a book. The animal abuse continues, despite what the law mandates.

#Violation of laws, #Animal Rights, #Jallikattu
The views and opinions expressed in this article are those of the authors and do not necessarily reflect the official policy or position of DailyO.in or the India Today Group. The writers are solely responsible for any claims arising out of the contents of this article.