The Valley is more anti-India than ever before. It has refused to surrender.

The rise of Hindutva politics in India poses a serious threat to the very idea of India. Besides, the tacit approval of majoritarianism by the current regime in New Delhi, and the unwritten decree that everything anti-Bharatiya Janata Party (BJP) or anti-Modi is "anti-India" will have serious ramifications.

Has this trend something to do with what has been advertised as the "Doval doctrine"? Whatever this doctrine, will it derive desired dividends for New Delhi or prove a damp squib?

Is this doctrine working? Will it work in the longer run?

If one were to dispassionately analyse merits and demerits of this doctrine in both regional and global context, it is more bad news and less good news as far as India is concerned.

First, let us talk about the claims that Pakistan has been diplomatically isolated. 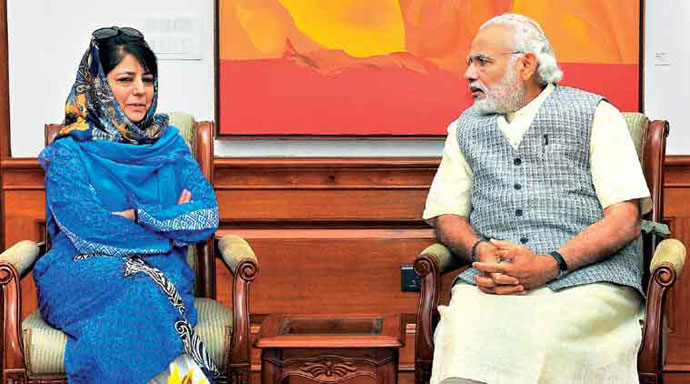 In post-Uri scenario, we heard many foreign policy pundits, and defense and security experts talking about the so-called "diplomatic isolation" of Pakistan. The verbal volleys continued for several weeks, especially during noisy debates on live television.

The question that should be asked is this: Does Pakistan stand diplomatically isolated in reality or only inside the air-conditioned television studios of Noida and Mumbai?

Donald Trump, the US president-elect, showered praise on Pakistan, saying it is a “fantastic country, fantastic place of fantastic people”. This was reported by The Guardian on 1 December 2016, quoting an official statement released by Pakistan.

On the contrary, India’s stated position is that Pakistan is the “epicentre of terrorism”. Furthermore, China remains Pakistan’s “all-weather friend”.

Farah Jan and Serge Granger in their essay, "Pakistan-China Symbiotic Relations" in Pakistan At The Crossroads, a book edited by renowned author and political scientist Christophe Jaffrelot, argue that in Pakistan, “the perception of China is of a reliable ally, regardless of regional and global circumstances.”

Likewise, China considers Pakistan as its “permanent friend”. What binds these two countries together is obviously their common perception of India being their rival.What should be more worrying for India is the growing proximity between Moscow and Islamabad. Shouldn’t this be a cause of concern for New Delhi?

The United States of America, China and Russia are stronger nation states unlike Nepal, Bhutan and Bangladesh (which are often described as "appendages" by critics) on whom New Delhi relies on support, in regional framework.

More importantly, Moscow’s intention to back the China-funded 2,000km China-Pakistan Economic Corridor (CPEC) and also its aim to perhaps link its own Eurasian Economic Union (EEU) project with CPEC is bound to give sleepless nights to Indian policymakers.

Russia’s ambassador to Pakistan Alexey Y Dedov was quoted by media as saying that Moscow and Islamabad have held discussions to explore possibilities of merging Russia’s EEU project with the CPEC, which will link Gwadar in Pakistan’s troubled Balochistan province to Xinjiang in China.

Moscow’s message is clear. It is unhappy with India’s growing closeness with the USA.

This is the scene at the global level.

On Kashmir’s turf what is the success or failure of the Doval doctrine? What is the reality on the ground? Has the conflict fatigue set in? Is the policy of military suppression working? Has New Delhi succeeded in instilling a sense of defeat in Kashmiris, or they are more determined than before to continue their political struggle for a resolution of the K-issue?

Omar Abdullah, former chief minister of Jammu and Kashmir, in a recent interview with Srinagar-based English daily Greater Kashmir claimed that the current chief minister Mehbooba Mufti was following "Doval doctrine" to “crush Kashmiris”. Junior Abdullah stated that the strategy pursued by the PDP-BJP coalition government in Jammu and Kashmir was a “pick from a plan suggested by NSA Ajit Doval way back in 2010.”

He further told Greater Kashmir that “every action of her [Mehbooba Mufti], whether to deal with the separatists or protestors, is part of the Doval doctrine.”

Today, Kashmir is more anti-India than before. Kashmir has refused to surrender. It has declined to give up. It has not wilted under pressure. And it continues to have hopes to change the status quo.

The bitter fact is that the BJP’s belligerent foreign policy is not going to help New Delhi in the longer run.

PS: I remember raising the issue of government forces firing pellets and bullets on Kashmir’s children and teenagers in one of the prime time television debates. I was stunned at the response of the anchor. Without expressing regret over the killing, maiming and blinding of Kashmir’s children, the anchor asked a counter question: “But why are Kashmir’s children at the forefront of the Aazadi protests?” The answer lies in the question itself. That’s why the Doval Doctrine isn’t working!​

#Ajit Doval, #India-China Ties, #Jammu and Kashmir
The views and opinions expressed in this article are those of the authors and do not necessarily reflect the official policy or position of DailyO.in or the India Today Group. The writers are solely responsible for any claims arising out of the contents of this article.