We have to build bridges between Kashmir and mainland India

Violence on any side cannot be the answer.

It is very easy to dole out gyaan at this time.

The Kashmiri Muslim is angry in his space. I, as a proud Indian, am angry in mine.

We may express our rage to our heart's content.

This rage will take us nowhere.

If the Kashmiri Muslim spews anger, it will make it all the more difficult for the reconciliatory hearts in mainland India to bridge our fault-lines.

If mainland Indians spew anger, the same will happen in Kashmir.

The space for those who want to work for the common good will be squeezed.

Also read: Kashmiri Muslims are caught between power elites and a heartless state

Most of my accusations point towards Kashmir.

And yes, some towards my own nation.

Why did we not gradually reduce the footprint of the Army from the densely populated areas of Kashmir and restrict its concentration only to highly sensitive zones and the border?

Why condemn a Kashmiri child to forever see the soldier marching across his motherland with a gun in hand? 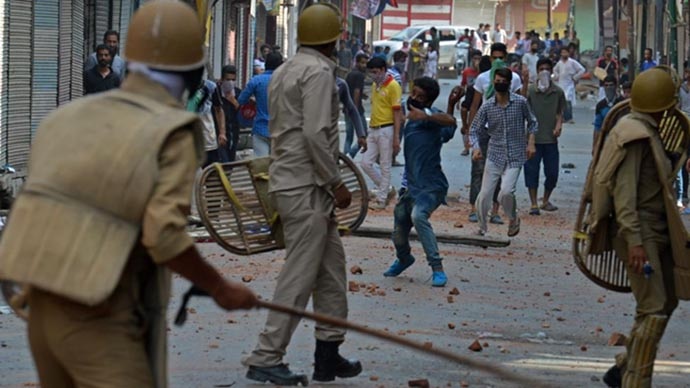 Why condemn a Kashmiri child to forever see the soldier marching across his motherland with a gun in hand?

A heavily militarised zone, in itself, makes the gun appear normal. Civic dignity lies in the jurisdiction of the police, not the Army.

But we are where we are. In a messy situation in Kashmir.

The Kashmiri youth definitely has more angst in his heart than me, that drives him to face armed soldiers with stones in his hand.

What will I gain from feeling big at this point of time, thinking that my angst is justified?

Also read: How India is censoring the Kashmir story

The enraged teenager standing there on the road with a stone in his hand, his eyes and heart burning, is my son’s age.

Will it be my victory as a mother if I continue letting the lad stand there, challenging the security forces, attacking police and army installations till he or someone from his group is grievously injured or killed?

If I am a loving mother to my son, can my love not extend also to this furious lad who is now convulsed by rage?

Can I not clasp his wailing mother? Can I not console his crying father?

When this child is back home, some day when he is quiet, can I not soothe his forehead with love, the way I do for my son?

I want to tell him – I have not come to plant the Tricolour in your house, my child.

The Tricolour lives in my heart. It flows in my veins.

I may not be able to understand your rage. I am not furious at my nation.

But I can cry with you when you cry.

Perhaps, when your tears have ended, we can talk. And try to find a meeting point.

The day after Burhan Wani was killed, a teenaged lad in a village in Bijbehara in south Kashmir wanted to join the funeral. His father was afraid for his safety and told him not to.

The son didn't agree. The father, petrified by what might happen to his son if he joined the protesters, gave him a thrashing in an attempt to dissuade him.

The next morning, the impassioned son slipped out of the house and joined the protesters. The angry father was left wringing his hands. What can I do, he told a relative. If he gets killed, let it be so.

How should this situation be viewed? The father may have been helpless at that time. But he should not give up on his son.

Violence on any side cannot be the answer.

If a large percentage of Kashmiris are angry at India, it cannot be without reason.

If a large percentage of mainland Indians are angry at Kashmir, that cannot be without reason either.

We have to find the meeting point.

Also read: A letter to Kashmir from New Delhi

The furious Kashmiris may refuse to come to the meeting point. But only love can build bridges.

We have to find those bridges between us.

In mainland India and in Kashmir, we have to find those people who will reach out to each other and find a way out of these yokes of fury.

The words of Shah Faesal, the first Kashmiri to top the IAS exam, have driven me into contemplation.

Faesal, who is currently Director School Education Kashmir, said on July 15: “When a State kills and maims its own citizens, it’s self-injury and self-decimation of the worst sort.”

India does not want to inflict itself by killing and maiming its own children.

A nation is defined by sovereignty over its territory, and peace among its people. Both cannot be compromised.

Why are these mobs enraged? How do we find peace in Kashmir?

Finding peace will be a long, arduous process. But it is not impossible.

I must admit that I found Shah Faesal’s comparison with Burhan Wani most natural. But in his Facebook post, Faesal hit out at the media for comparing him with Burhan. “Have I joined IAS to do a job or to become a part of your sadistic propaganda machine?” he questioned.

I have to give credence to what Faesal says. If he calls the comparison part of India’s “sadistic propaganda machine”, perhaps I, as a mainland Indian, have been woefully wrong in my understanding of Kashmir.

What have I not understood? What are the missing links here?

I can find no resonance with Kashmir’s demand for azadi. But I cry when my brothers and sisters, my sons and daughters in Kashmir cry. I cry when they hurl themselves at armed police and soldiers, inviting retaliatory action.

I cannot brand them all as traitors. There is something here that I do not know. Something that I cannot feel.

There is something here beyond the hideous role played by Pakistan. Something beyond the radicalisation of Kashmir, and the Hindu majoritarianism that is on the ascendency in India.

Why have Kashmir and mainland India lost the connect with each other?

Also read: How Mehbooba Mufti turned from mourner to aggressor in Kashmir

Have we dehumanised the Kashmiri Muslim?

He is our brother, born of this land. We share the same DNA. His children are being blinded by pellet guns today, or maimed or killed, because both of us have lost vision – he as much as I.

I urge my Kashmiri brothers and sisters not to be burdened by the scars of the past. I too must shake off the hurts and aches of the past.

When times are normal and when Kashmir is in peace, we can talk of the Kashmiri Pandits finding a home in their motherland.

Today, let us douse the fires burning in paradise.

Humanity throbs in our veins when we feel. In The Indian Express, Pratik Kanjilal notes the shocking trigger-happiness of mainland Indians towards Kashmiris on social media.

This is expressed, he says, when we completely succeed in dehumanising the other.

This is the dark side of nationalism, which can tear nations apart.

Let us find light within us, and a way out of this darkness.

Let us strengthen the ties that still bind us. Let us find a common ground where we can meet.

#Indian Army, #Kashmiri Muslim, #Burhani Wani, #Jammu and Kashmir
The views and opinions expressed in this article are those of the authors and do not necessarily reflect the official policy or position of DailyO.in or the India Today Group. The writers are solely responsible for any claims arising out of the contents of this article.